The piglets are weaned!  Star is so happy.  They were getting so big and annoying to her.  I remember that moment, when Rose was two and a half and was flipping herself all over my body while I was nursing her, and kneed me in the face.

They aren’t super happy about it, of course, but they’re doing fine. We will let them back out once Star’s milk dries up.  I wish we could have separated her a little more while she was nursing (we have some better fences to build), because she is looking a little slim.  Ethan tried to feed them extra, but it all went into Bee’s second, third and fourth chins.  We are hoping she is pregnant, and not really quite so fat.  I think Star will fatten up again now that the piglets are off of her.  We are still learning about keeping pigs. 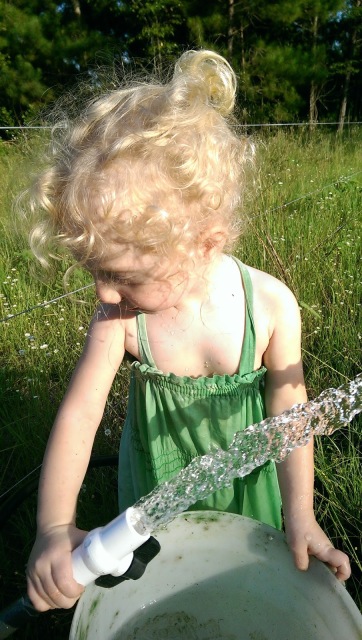 Clothilde is big enough to help with the chores now!  She’s been gathering eggs and helping Ethan fill the chicken’s water up.  She loves it.

In this season of abundant grass, the hay ring has been re-purposed as a play structure.

We are now milking all four mama goats!  Rose has really been interested in helping me.  One day she milked both Cricket and Firefly with little help from me.  Mirin says he wants to take over the goat herd someday, but mostly he likes to help chase them down from their pasture.  I say chase, because otherwise they stop and eat fallen cherries under every single black cherry tree.  We would never make it down to the milking shed.

May is really happy to be milked again, and we even managed to get June Bug in the milking stand – not an easy feat.  She was so upset about it, she was actually frothing at the mouth and refused to eat her barley.  I hope she will settle into a routine soon.  I feel like so much of my life is picking up huge messes my kids have made and chasing obnoxious animals around.  Less of both those things would be great.