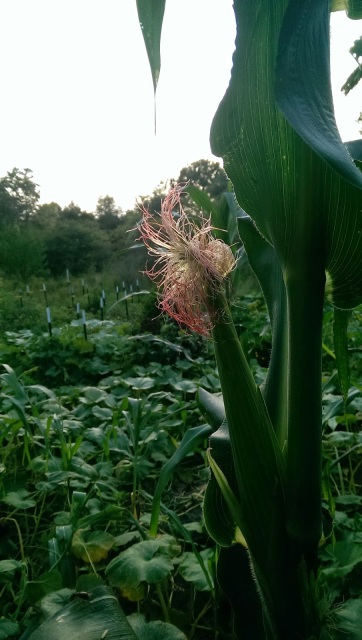 The corn is not only tasseling, but little ear tufts are out, too!  These seem to have appeared overnight.  I was even watching for them carefully this year. (you can get a little glimpse of the incredible jungle of squash vines in the background there). 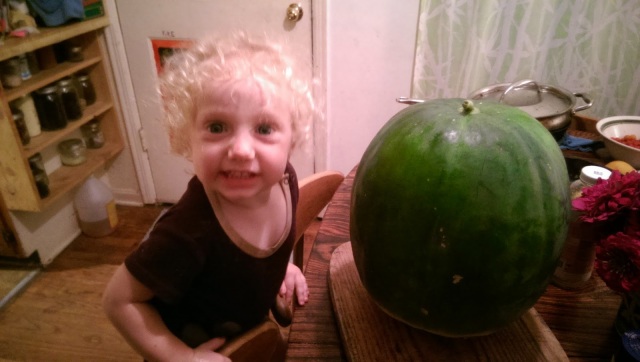 We got the first watermelon, too!  I grew the Van Doren Moon and Stars this year.  They are huge.  It was not quite perfectly ripe, but it was still very sweet.  We still have a hard time telling when melons are ready to be picked.  It has been so wet, we thought it would be better to pick it a little early rather than later in case it exploded or cracked.  We’ve had that happen before!  This melon left an incredible crater in the mulch where it grew.

The harvest of Turkish Italian Orange eggplants has gotten away from me.  They tend to be bitter if they are left on long enough to turn orange.  I have dozens of little orange eggplants now, so I made a curry-style pickle from them.  The salt and fermentation draws out any bitterness.  I am really looking forward to how these turn out.  It’s a recipe I’ve made with mango before, but not eggplant.  It has cumin, fresh hot peppers, wine vinegar, salt, fenugreek seeds, ginger and Rapadura.  It’s still bubbling away on my table right now, but it will be ready to taste soon.

This is what the paths look like these days!
And I thought I had left such generous spaces between everything!

Ethan noticed a really cool yin/yang kind of thing about the male and female squash blossoms.  The males all stick up as high as possible.  They look like they’re saying, “Pick me!  Pick me!”

The female blossoms are laid down on the ground so gracefully and with such care.  I had never noticed that before.