I’m so lucky that I have such a big, sunny garden, but I’ve also come to realize that not being limited by space can be more difficult than having to squeeze things into a small area.  Ethan called my garden plan this season “masochistic” after he offered to help and i told him what my goals were for the day.

The summer season this year was so disappointing that i gave up half way through and started thinking about the fall and winter garden, and it got much too complicated. This season I’m hoping to accomplish what I’ve always wanted to do – plant the entire 3/4 of an acre in vegetables, grains and flowers. 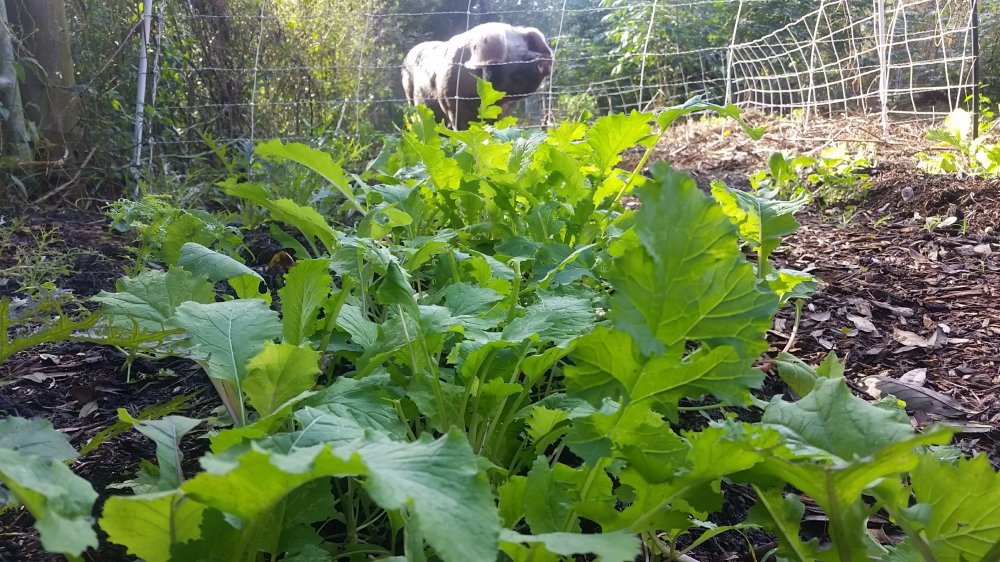 I love that about gardening – despite the weather or bugs or mildew etc, there’s always the chance to start again fresh, with wisdom from the last season under your hat.

The pigs have happily done the difficult and tiresome job of clearing out the jungle of summer with snout and trotter.  It always amazes me how quickly they work a tangle of 8 foot tall impenetrable woody weeds into fluffy garden soil, ready to be planted.

Besides, the girls are helping in the garden for homeschool this season.   We’re donning hats and shovels and calling it a botany block, because there is so much to learn from seeds and flowers and roots. Not only botany but also the stories of people and plants, insects and predators and microbes, death and decay and rebirth.  Sometimes it seems to me that all of life is contained in some form in the garden, this ancient symbol of our beginning. 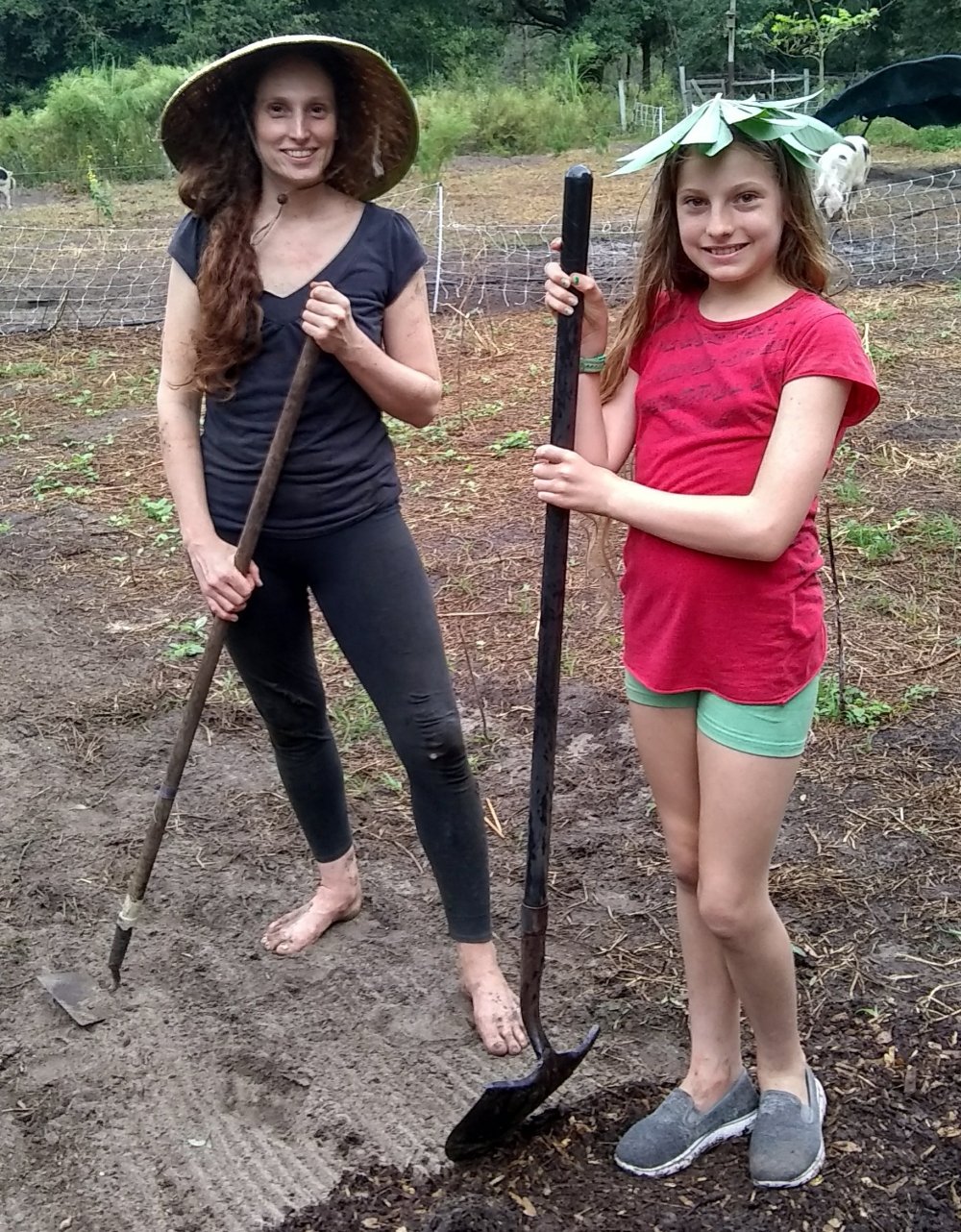 All that’s left for us to do after the pigs have been through is to mark out beds with mulched paths, work in some compost, and plant the seeds or starts. It’s like building a little city and deciding where each neighborhood of plants might do best.

We have been marveling at how everything starts off so small and gradually fills all the space with shades of gentle green.

Are you wondering what we are growing in our crazy garden this season? 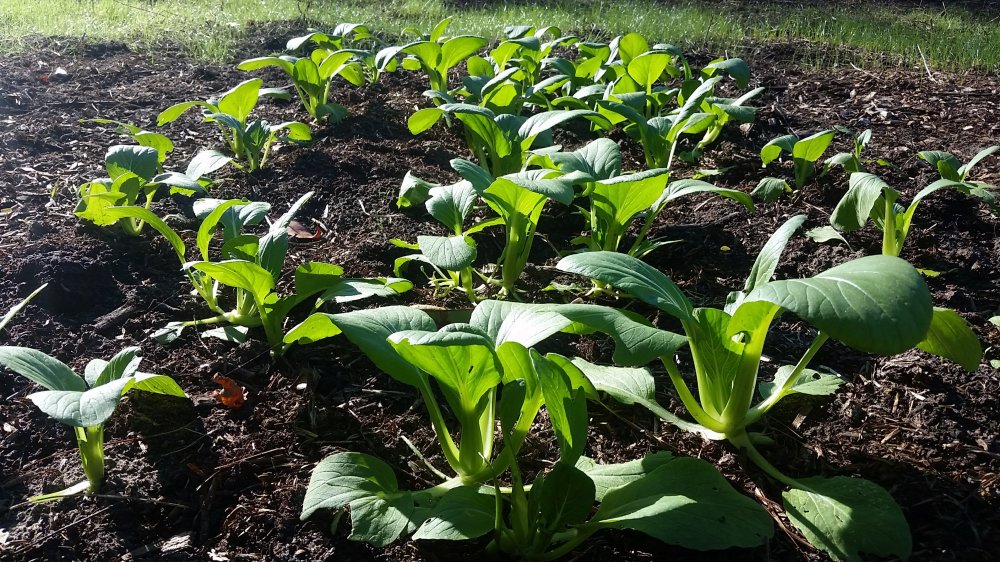 First we planted the vegetables that don’t mind some warm weather and need either a long season or short days to keep from bolting:

We have an experiment with artichokes and cardoon – I’ve never grown either of them but I’ve always wondered if i could.

Radishes: Misato Rose, plum purple, and 4 different daikon radish from different seed companies to see what differences there might be, a locally bred purple daikon.

Plus strawberries and onions in abundance in the back of the garden!

I have starts started for winter vegetables, and soon I will be planting:

Before you think I’m insane, remember that this garden encompasses Fall, Winter and Spring, with different plantings as the weather cools for short and long season plants that like cooler weather.

And I  usually don’t write about exactly what I’m planting because it never all works out. Then you might wonder what happened to the broccoli trial?  And it would all have perished in a frost, or been devoured by goats and caterpillars at the same time, or been scratch victims of the terrible chickens.

Yes, I’ve definitely decided that space limits in gardens are a good thing, especially if you are easily tempted by seed catalogues, but at least it is a lot of fun! It’s half way planted so far and i haven’t keeled over in the kolhrabi yet.

I can’t wait to see how it all grows this year.