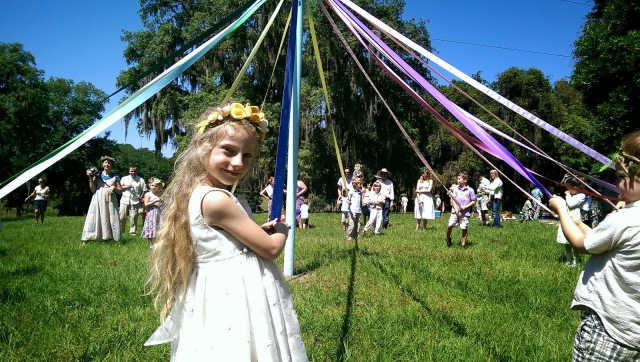 We all had a blast at the Morning Meadow May Fair over the weekend.   It was at the Little Orange Creek park where Earthskills was this year.  It has become one of my very favorite parks.  There are beautiful oak trees every where, and an old cemetery from the 1800’s that the park is restoring.  The weather was beautiful and we saw some old friends we hadn’t seen for a really long time.

With the beautiful ribbons and singing, it was really a magical event.  Only one little kid fell.  It was when Rose’s class was up doing the maypole dance.  All the little kids were chanting, “It’s easy!  It’s easy!”  Just then a little girl went down face first, and everything ground to a halt. 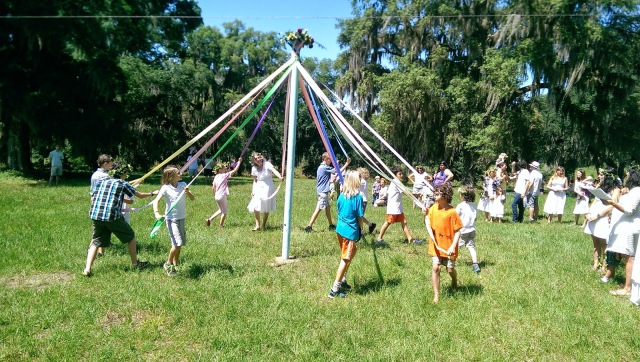 Mirin was not expecting to be part of a may pole dance, so he ignored us telling him that the “dress code” was white with a flower crown.  He did wear the crown he had made earlier, but refused to put on a different T-shirt, so he was the kid wearing deer-hunter orange when his old teacher from Heart Pine School had him join in.  At least he was not completely alone.

The big kids also neglected to bring shoes, but it was ok.  They only remembered halfway across town, and we were already late.  They are good at avoiding ants and fire nettle already from being a the farm.