Summer is here, with all of the usual heat and humidity.  It’s still just early summer heat-and-humidity, of course, none of the late summer 95 degrees and 100% humidity that we can look forward to.

I am excited about summer vacation.  Home schooling is a huge time and effort commitment, and I can’t wait to have some time for my own projects and interests.  I’m also excited that Rose will no longer be able to bring home nasty little viruses from school every week.  It has earned her the nickname of “Typhoid Rosie” around here.

I am even now thinking over our year of homeschooling, and making notes about what can be improved.  Next year I want to spend more time on things we all enjoy.  This year was Mirin’s 3rd grade year, and we spent so much time on the Old Testament stories.  I really don’t like the Old Testament stories!  They are all about how mean people can be to each other.  They are the propaganda basis of current political conflicts and civil rights abuses that make me angry and upset.  They made me depressed all winter!  (I should add that the Christopherous curriculum really does make a nice little booklet of the stories and removes all the weird stuff about genital mutilation, rape, domestic abuse and slavery.  Maybe the problem was that I went back and read the real stories just before teaching this block).

And then our Native American studies felt rushed.  We should have just focused on the things we really like and are inspired by.  That’s what is really important.  It is so true that as a teacher you have to be able to bring things to life through your own heart and soul.  That kind of soul-level teaching just can’t be pretended.  At least I’ll be able to try 3rd grade over again in a couple of years!

Looking over 4th grade, I am very excited to work with the book Earth, Air, Fire, Water.  It is all about making toys and devices that harness the powers of the elements.  The first time I read through it, I thought it was a great book, only it was written in that same pretentious style that so many Waldorf materials are written in.  Then I looked at the front and realized it had been translated from German.  Is it possible that all the English-speaking American Waldorf authors have absorbed the “translated from German” style of writing, and that’s why they all have that same tone?  It’s a good book, and even is authentically translated from German. 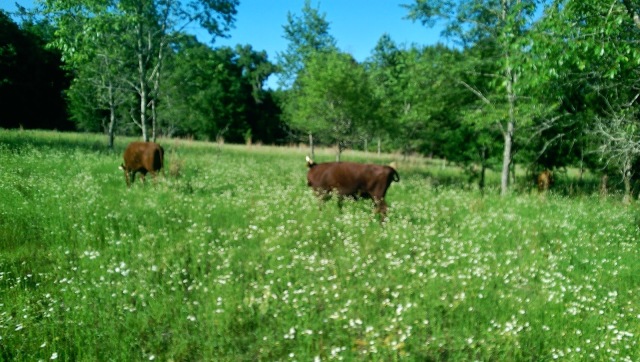 The cows are out grazing!  I hope we have bought our last bale of hay for the season!  There’s so much more milk now that they are on the good green stuff.  Everyone’s casting off the shaggy winter coats as fast as possible.

It is also quickly becoming “Roach Season” around here (not pictured, for obvious reasons).  The Northeast might have mud season, but at least they don’t have Roach Season.

We’ve been greeted by the enormous 2-inch long ones flying around our porch light like moths lately.  We had such a wet, mild winter, it looks like it’s going to be a tough season.  The ones that have overwintered in the walls are coming out in style.  The boric acid and diatomacious earth I put down has worn out it’s effective life.  I saw several of them swimming around in it with no ill effects.  I killed 12 of them the other night, and I have made a sworn quota of at least 5 large ones every night.

I realize that they are fairly harmless – after all, they aren’t venomous or bite or anything, but they do chew holes in the fruit and get up to all sorts of mischief I’d rather not talk about.  The huge flying ones seem to try to land on people and crawl around all over you.  Outside I leave them alone, but inside my house they are fair game.  I’m taking my roach-killing oath seriously and have mentally mapped out their favorite haunts to check every evening.  They seem to really like the piano for some reason.

I realize that in other places roaches are not common unless things are really unkempt or dirty.  Do not assume this, it is only because you don’t have Roach Season where ever you are.  I assure you this is not the case in Florida.  There are hundreds of them just outside the door in the magnolia leaves,  and most of them come in from outside, like ants do in other places.