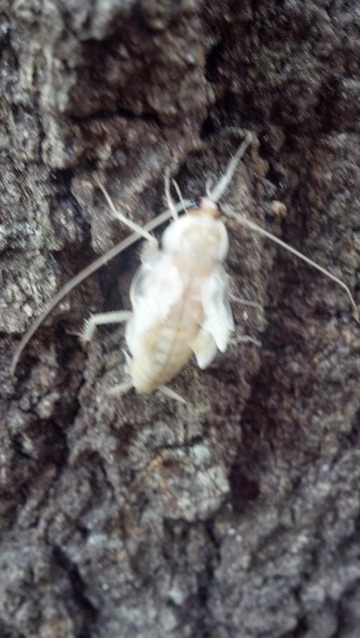 This was a strange insect Ethan found inside of a gopher tortoise burrow that the darn dog tried to dig up.  The gopher tortoise is ok, don’t worry.  He just moved his residence.  The stupid dog, not so much — her paws were bleeding.  Now we have a huge 6-foot pit going across the path to the pastures.
Is it a cave cricket?  An immature mole cricket?

The evening primroses are blooming all over the place, especially in the garden, where I hesitate to call them weeds.  They open like bright yellow stars all over the green every evening.  We have been staying out later in the evenings to work in the garden.  It is hard not to when it stays light for so long!  Yesterday evening we took a walk down the driveway to see the May fireflies sparkling in the forest and to listen to the frogs singing in the pig’s wallow.  It sounded like a wild frog party over there.  They stopped as soon as we were within 20 feet of them, even though we were very quiet.  We were not invited!

A long-headed grasshopper.  The grasshoppers are really getting going these days.  I do fear for my garden.  I think they are eating holes in the eggplant leaves, although it could also be the numerous wooly bear catterpillars.

This was interesting!  Just before nightfall I was finished being kicked all over by Nougat (I was milking her), I put all the mama goats back in with the babies and they were all nursing when I saw this on the garden gate. It looked so much like a big mama roach nursing her babies we laughed Ethan got a photo.  She is certainly the matriarch there.