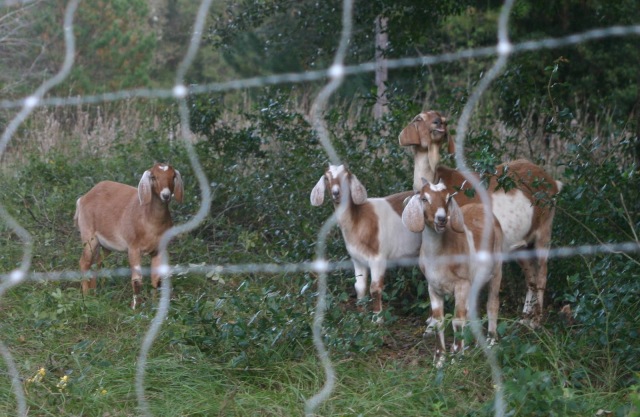 Since autumn set in and the grass became less edible, Ethan was working on a new fence line so the goats could be put in a wooded area where we’ve never had any animals yet.  It’s loaded with grass, vines, low woody browse and acorns.  They had been in the paddock adjoining the milking paddock for several weeks.  It has a permanent fence around it and gets used whenever we need a solid barrier.  Since it is a small paddock that we are not really cultivating for nutrition and diversity and it is mostly called upon for it’s useful fencing, all the good stuff has been eaten back and the trees have the “high tide” nibbled-look.  The goats had become tired of their hay long before Ethan finally, finally finished fencing the wooded area.  I thought they would be so happy to be out, but we still had quite a time getting them there, since I’ve been far too absent for them to still be well trained to follow me.
(I know that sounds strange, but you have to understand that goats, like camels and donkeys, are only semi-domesticated.  They become feral again if you don’t constantly give them treats and back rubs.)

We finally got them in, and with a sigh of relief we left for the night.  When we returned the next day, everyone except Nougat was locked in the milking paddock (?!!!).  Nougat was so desperately freaked-out about being left behind, she could only bleat until she was hoarse.  The woody browse was untouched.  With much cursing, we put them out again.

About 20 minutes later, we saw June Bug leap over the fence like it wasn’t there, and the rest of them (except Nougat) get out and lock themselves in the milking paddock again.  They can squeeze in through the gate, but they hadn’t been able to figure out how to squeeze out, for some reason.
For about a week we kept humoring ourselves and putting them out every evening, only to find them locked in the milking paddock again.  They were determined not to be left in a delicious, untouched paddock.  They demanded the trodden-down dusty milking paddock, gosh dang it.

Who knows what goes on between those long ears?
Ethan rescued the goat netting from where we had abandoned it years ago (it is a huge pain to set up here with all the blackberries and cactus, but it really does mostly keep them in).  The gate to the milking paddock has been fortified to be goat-proof (ha!), and they are forced to be out with the delicious woody browse whether they want to be or not.