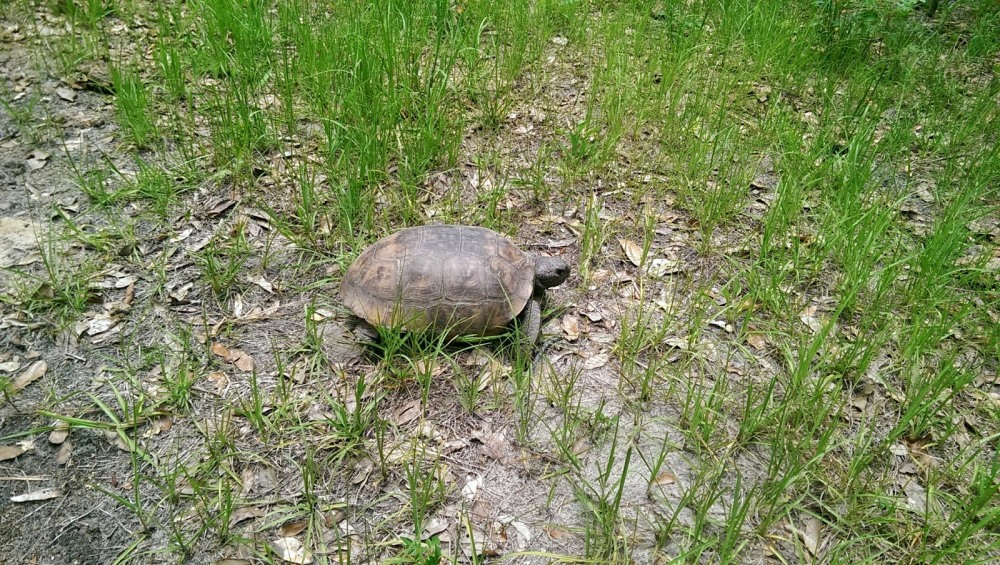 We have gopher tortoise neighbors at the farm.  I say neighbors, because we do co-exist with them on that level!  Gopher tortoises are some of my favorite animals, and I love observing them out grazing, or the fastidious house-keeping they do to their burrows after a big rain.  They can live to be over a hundred years old, and they seem to me almost like a different race of people, with their own society and business.  There is so much wisdom in their bright little eyes.

We have a fairly dense population at the farm.  We have always worked around them, and the pasture improvements have only seemed to increase the population.  Lots of people think that having tortoises is dangerous for grazing animals because they can break a leg if they trip on a burrow, but  we’ve never had this problem, even though there are places I can see that someone had a foot go out from under them by a burrow.   The tortoises also seem largely unconcerned by large ruminants wandering around. They are such an ancient species, they’re probably wondering if the mammoths look small this year to you, too!

Our favorite gopher tortoise, who lives close to the orchard, Rose named Mrs. Gophey. She is often out at noon, grazing.  If I meet with her unexpectedly, she is gruff. She’ll give a hiss, and run surprisingly fast for her burrow, and disappear. A male gopher tortoise who made a burrow at the edge of our fire pit (he doesn’t seem to mind the occasional camp fire/party) is often seen going for visits at Mrs. Gophey’s (Ethan named him Prince Charming), and she has had little hatchlings hatch from the mound in front of her burrow every year for the past few years.

Another gopher tortoise who we will occasionally run into we call Queen Maeve.   Every now and again we’ll run into her, but we never knew where she lived.  This year we were tractoring the meat chickens on one of the remote grazing lines that has lots of broomsedge, in hopes that they would knock down the old tough stalks, and then when the cows came by later they could eat the nice new green shoots.

One day as I was going to water, feed, and move the chickens, I ran into Queen Maeve, right next to one coop. She didn’t startle and scurry off this time. I looked closer and realized she was laying eggs. Right there in the middle of the field, not by a burrow. She seemed not seem to notice my presence, and I remembered hearing that they go into a sort of trance while laying eggs.  Unwilling to disturb her, I left the coop where it was for the day, and when I came back the next day she had camouflaged the nest so well that if I hadn’t seen her laying, I never would have seen it.

I also discovered a few other curious things.  First of all, she is living in a double-entranced burrow with another tortoise. There are at least 4 burrows in the area that start as a single hole and branch into his and hers burrows after about 3 feet. I noticed a male around (I am now calling Cuculainn, of course) and he went straight to one of these burrows as well when he noticed me. I wasn’t fast enough to see which fork he took.

Three of these burrows look very male. Tortoises usually lay their eggs in the pile of dug up sand in front of their burrows, called the skirt. You can guess the gender of the tortoise by how large and well-kept this skirt is. These double burrow skirts are all small and shallow, except for one.

I’m curious to find out why she was laying away from the burrow.   It could be because we have such a dense tortoise population, or perhaps because the burrow she’s in doesn’t have an acceptable skirt. Maybe since we’ve been doing the managed grazing, and the grass has gotten denser and she’d rather piggy back on another tortoise’s burrow.

Or perhaps she’s laying in the field to throw off predators. And somehow, she and Cuculainn must be getting along, although female gopher tortoises are said to be very territorial.  These chickens are in the freezer now, and with the crush of summer work, we’ll only be over here to set up grazing lines. Perhaps we’ll never know, but just the way human neighbors add gossip and interest to life, we love keeping up with the gopher tortoise neighbors!