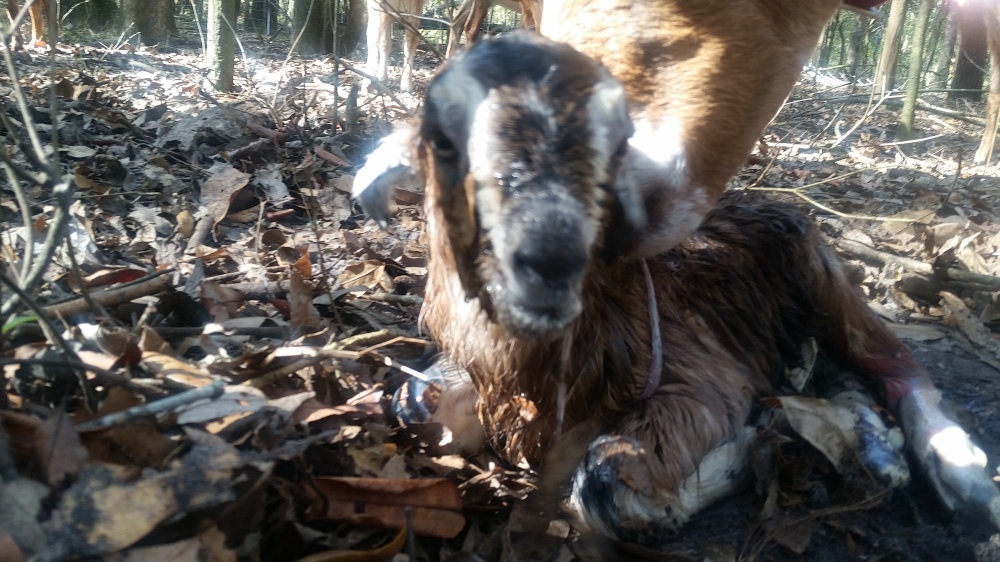 April kidded a few days ago.  That morning I had noticed she was off by herself when I opened the fence to let the goats go grazing.  The other goats clustered around me, but refused to leave their paddock.  When I returned an hour or so later, I found April lying on her side with a half-born kid.  She was calm and quiet as I approached.  The kid was not moving, and I was worried for it.  As I crouched down to investigate, the other goats came crowding around us.  The kid was wriggling a little, still inside the caul.  I gently tore the membrane away from it’s mouth and nose.  It sucked in a breath and gave a little squawk, it’s head waving unsteadily.

April curled around and began nibbling at the caul.  The kid wriggled a little more, and as April stood up, it slid fully into this world.  She immediately began lapping at it, and making the small, sweet noises that mama goats make to their newborns.

Within a few minutes, he was up on wobbling legs, aiming to nurse.  This birth came as such a blessing and relief.

A little over a week ago, I had noticed that May was lying by the hay and laboring.  I was just about to leave, but stopped and ran to her.  She had evidently been laboring for quite some time.  In the crush of work that morning, I had let the goats out, but neglected to do the usual head count.  As I watched her labor and labor, I had a sudden sense of something being wrong.  When she turned away from me, I saw some part of a kid presenting.  I came and felt around, and realized it was a leg bent forward and curled under the kid.  Carefully, I pulled it out, and realized the kid was presenting sideways.  Begining to panic, I felt around for the kid’s head, and was surprised to find it was tipped backward instead of coming out nose-first.

Then came the struggle.  I tried and tried to hook a finger on the kid’s neck, or to push it back, but May’s laboring had gotten it stuck there, half ready to be born in that terrible position.  It was the most awful thing I’ve ever done, but I worked at it, trying desperately to find the other leg, and to pull the head forward.  I was acutely aware of how much pain May was in while I was struggling with her.  In the end, the kid was born with the head facing back – a difficult and painful birth I thought might kill both of them.  May was okay, but the kid, sadly, did not survive.

May has been slowly healing and recovering.  This was our first-ever birthing problem we’ve had with the goats, and reflecting, I realized that we have had several other problems related to low magnesium after switching to the grass-fed ration.  It has added calcium, and in this area with our naturally high-calcium soils, I think it is throwing off their magnesium balance.  I am switching them slowly back to the old soaked barley, copper sulfate, and cider vinegar ration.  Of course, being goats, they are refusing it at first.

Thank goodness one kid is now safely on the ground, and May is almost back to her ornery self.  I am left relieved, grateful, and with a profound respect for the powers that bring us forth into life.