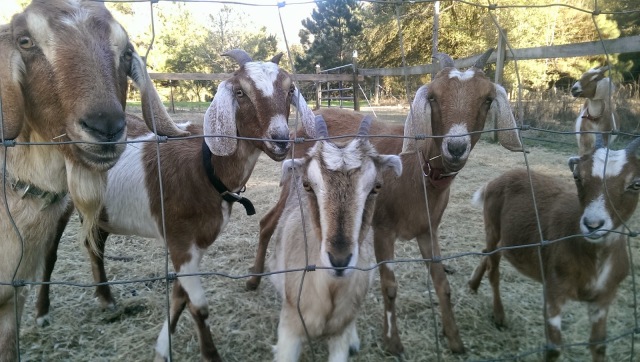 (M’am, could you pick the perpetrator out of this line up, please?)
Ethan says it was probably April on the far right – not for any particular reason, other than he says her Shrek ears haunt his dreams.  She did turn out to look a little like someone did cruel genetic experiments on her (although I think she’s cute in the same way French bulldogs are cute), and I guess that IS kind of what happened to her.
The buck was a crazy blend of Nubian, African Pygmy, and La Mancha goats that happened when his dad snuck into the doe pen at our friend’s farm.  When we saw his little Shrek ears and waddles, we knew the kids would turn out a little weird-looking.  But we didn’t quite expect April.  She got more of the African Pygmy genetics I think.  Twilight Sparkle got the tiny ears, too, but she also has long, magic unicorn eyelashes that kind of make up for it.
There was a wooden pallet leaning up against the fence in the goat’s paddock that was knocked down this week, and it’s had the strangest effect on the goats.  Even though it is only four inches tall, any amount of height has a bad effect on a goat.  It seems to make them extra saucy.
While I was milking Matilda one day, they were so funny.  I think someone was in heat.  Possibly all of them.  Well, except for Stripey, our wether, although who knows, maybe he was in heat, too.  They were running and jumping up on the pallet and head-butting any other goats around.  Twilight Sparkle missed her footing on the pallet plank and had a very ungraceful stumble that she tried to shake off, but it didn’t quite work.
Cricket did a fancy leap off of the pallet, ran at the pile of hay, turned and was about to twist around and rear up with her ears raised at Stripey, who was just standing there…only she slipped on the hay and hit the ground chin-first in the most undignified way and with a resounding thwop.
Who knew that a pallet would make the goats behave so idiotically?
Another bit of gossip:  I think Explorer, the bull, has fallen in love with Isla.  They are always grooming each other soppily.  I know pigs will fall in love, I didn’t know cows did, too!