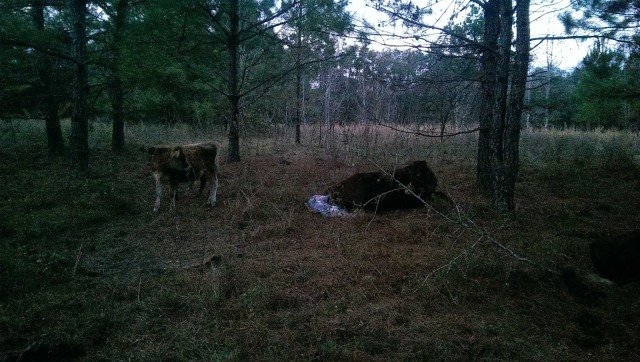 Geranium missed the date she was AI’d for in December, but she still looked pregnant.  She must have been bred by our bull Explorer.  As Christmas came and went, she looked more and more ready to give birth, we just didn’t know when.

Last week her udder started to swell, so we knew it would be soon.  On Thursday evening Ethan was walking up to check on them and bring the dog her food.  I was finishing up with the goats – bringing them back to their pasture after milking, when I heard Ethan calling.  It sounded like he was saying, “The calf was born!”  I ran up as fast as I could (it’s quite a ways – they are on the farthest grazing line!).  But the calf was only halfway out.

Sampson and Nutty were close by watching uneasily, reminding me of Clothilde’s home birth in our living room.  Mirin and Rose were close by, playing and fighting while I was in labor.  She just lay there for a minute, and then she stood up and gave a big bellow.  The calf was born!

All the other cows were eating hay around the hay ring, but now they all came running over when they heard her call to the calf.  (I was surprised, I thought they would give her space and privacy, but no).  They stood around and stared.  The caul membranes were over the calf’s face, and it was struggling.  Geranium began to lick the calf and eat the caul, but I was worried the baby couldn’t breathe yet.  Ethan took his knife and cut the thick caul away from it’s face, and we heard it snort and breathe.  He also cut away some of the sharp blackberries to make it a little more comfortable for them.

Matilda cautiously sniffed the baby a few times.  (I have a feeling she likes babies, even if she bullies on the ones that aren’t her own).  The dog, finished with her food, tried to come over and see the calf, but Geranium sent her off with one very loud and emphatic moo.  Then everyone went back to eating hay, except Nutty, who ran around like an idiot, kicking up his heels.  I think he was glad to have another calf to play with.

It was so dark then, we couldn’t see if the new baby was a girl or a boy.  The temperature was dropping – it got quite cold that night, but the calf was nearly dry and was trying to get on its feet by the time we went home.
The next day we went out and saw the baby was a girl!  She was already running around and playing with Sampson and Nutty.  Geranium is such a great mama.  She’s very attentive, but not as hyper-vigilant as Chestnut. 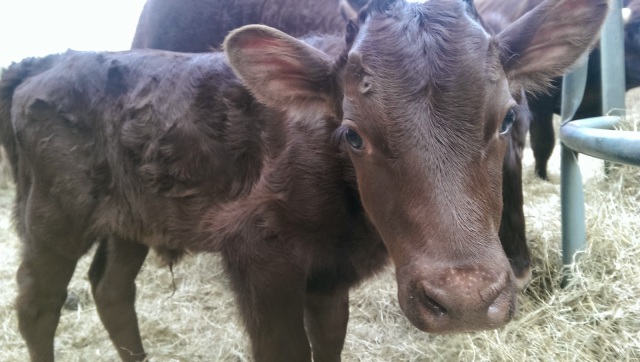