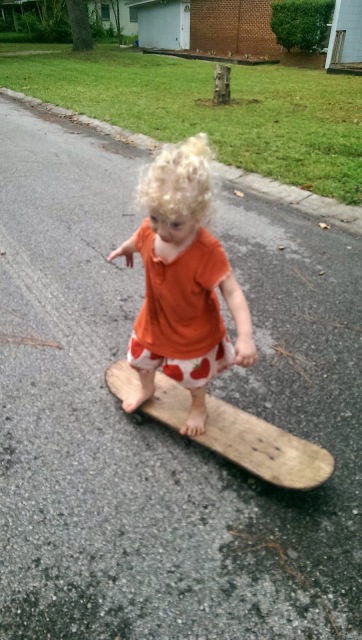 Sunday was Ethan’s grandmother’s 96th birthday down in St. Petersburg.  It was a long drive, a restaurant meal, an hour in a house with extremely fragile decorations at toddler height, and another long drive home.  So Clothilde and I stayed home.  I was dreading a long day of keeping up with her and no breaks, but I was dreading the car ride and everything even more!

Ethan did the chores early in the morning, so we didn’t even have to worry about that.  After they left, I took Clothilde to the park for three and a half hours to wear her out.  Eventually we ran out of water and the playground equipment was too hot to touch in the afternoon sun, so we left.  For the first time in a long time Clothilde took a nap that was not during chore-time (or actually it was, but we were not doing the chores then).  Ahhh, nap-time, I have missed you!!!

The evening was very quiet and mellow until Ethan and the big kids got home.  There was some excitement after that because everyone had such a great time.  It worked out perfectly, and it was really nice to have a day with Clothilde like that, as if she was the first, only baby.