My guide book, which at this point had become a joke, says that after “what will have been two fairly taxing days,” this part of the hike was supposed to be relaxing.

When we first started the path looked very flat and straight, and a beautiful snowy peak was directly in front of us. We made jokes that we were going to hike all the way up there and laughed, which turned out to be ill-fated because we actually did end up very close to it.

The path WAS fairly flat and “relaxing” for a short way. Then it became switch-backs that disappeared into the heavens. The cartoon map of the trail in the guide book showed three little squiggles on the path for this part, but it was actually switchbacks that went on for 8km and gained 500m of elevation.

It was a beautiful place, but everyone was so tired. The Teenager and Rose got in a spat over a waterbottle, and the Teenager threw on his pack and disappeared down the trail. It was 4:00 when we finally got to the summit near the snowy peak, and crossed over the border into Italy.

This part was my favorite. We were close to civilization, and the rest was downhill. There were trickling little creeks and beautiful flowers, including Arnica, which I had never seen before, and the path went down and down into the valley. The group of American girls who camped near us that morning passed us along the way. We stopped briefly at a little museum there in the slope, and saw cows coming to be milked.

Down in the valley it was grassy and marshy, and water ran across the path. Rose and I were able to chat (going uphill at high altitude, I didn’t have enough breath for talking). My dad plugged along behind, taking it easy as possible with his enormous backpack.

When we arrived the sun was setting and we found the Teenager relaxing on the deck of the refuge. Wild camping, except at certain elevations is illegal in Italy, and there were signs everywhere that camping was forbidden, but I had read all over the Internet about people camping here, and the guy we had met on the bus assured us that there are tents EVERYWHERE here too, but I couldn’t see any.

We ran into the American girls in the lobby. They had also been planning to camp, since it says in their guide book you could, but when they asked at the refuge they were told it wasn’t allowed.

This made my heart stop, as the refuges are booked months ahead of time, and there is almost no chance of showing up and getting a bed, but by some miracle they had 4 beds, and we also had enough cash to pay for it (no cards are accepted). It included dinner, which was fabulous with 3 courses and dessert, and unlike the French refuges, everyone who worked there was really nice.

We sat next to the four American girls, two of whom were sisters, and talked about the hike and why the heck we were there. They were also struggling with big backpacks. They said 16% of all the hikers who attempt the trail get airlifted out. I had no idea it was that many.

The beds were right under the ceiling, and it was a big open dorm, which was cute but a little hard to fit your toes in at the bottom of the bed. Also the shower was just a cold trickle from right out of the mountain snowmelt stream. Still, after everything we’d been through the past few days we felt like it was a dream too good to be true, especially when it started to drizzle that night. 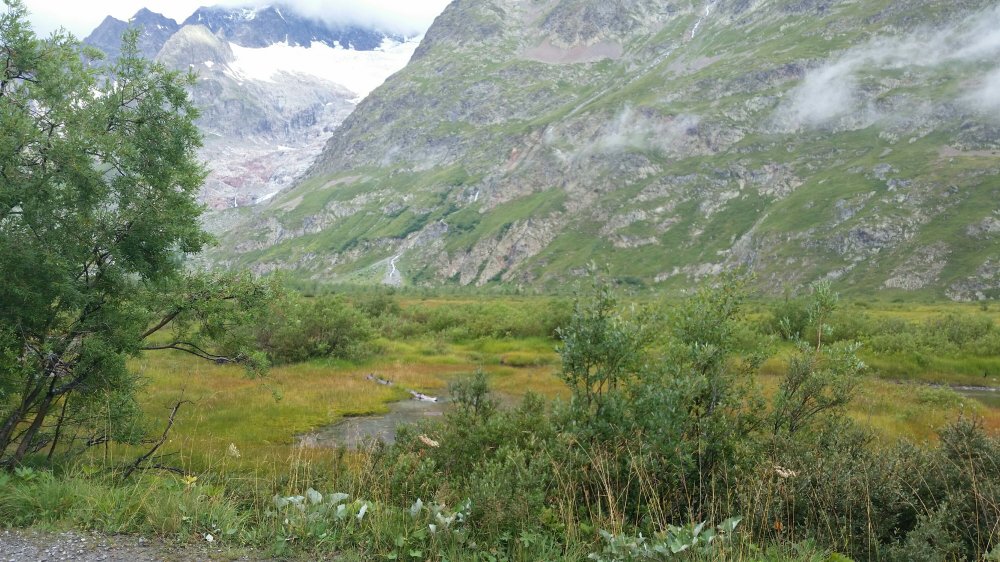 The next morning cold, grey rain was lashing against the windows, and the waterfall just outside tumbled fiercely down the rocks. One small, unhappy-looking tent was pitched below, with no sign of life. Everyone gathered in the lobby and sat around talking about the weather while the staff wiped down tables and put away chairs to make it very clear they wanted everyone to go away already.

We clipped on our rain covers for the backpacks and pulled on ponchos. It was all downhill, and there was a bus service to Courmayeur in only 12km, shaving 6 whole km’s off the day’s hike. 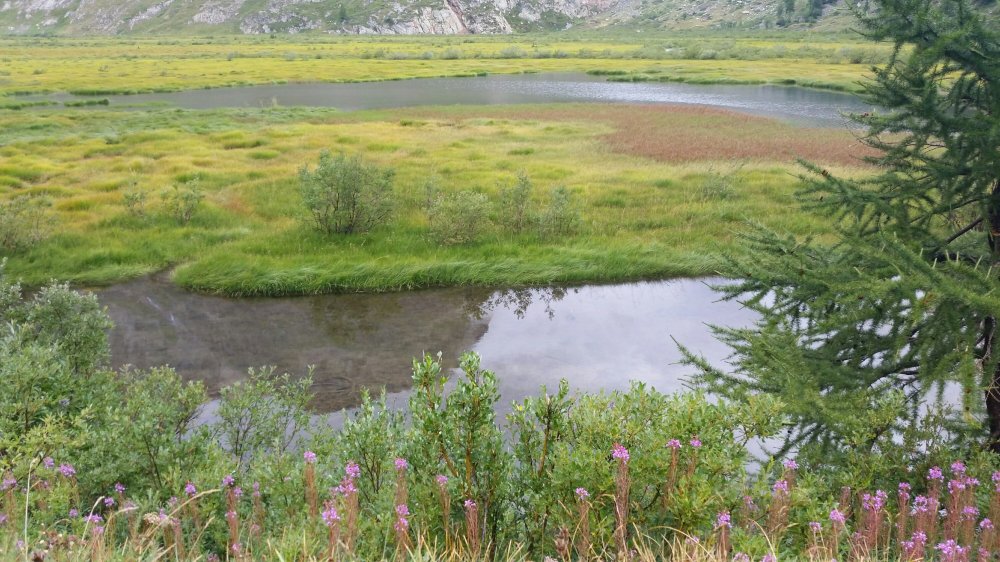 The walk was flat and beautiful, and the rain stopped shortly and became dramatic misty clouds. The valley was very marshy, with clear pools that reflected the mountains and flowers blooming all around.

Little rivulets of clear water slid slowly by through water grasses, like a scene from the tragic Lady of Shallot, and the white clouds above opened on the craigy contours of the mountain like the towers of Camelot.

The 12km flew by, and i almost felt like it didn’t count as hiking to not gain at least 200m elevation during the day. We made it to the bus stop. Nearby there was camping offering pizzarias and hot showers. I was worried we would get to Courmayeur and not find a place to stay that wasn’t horrifically expensive, but everyone was thoroughly tired of camping, especially with the cold drizzle starting again.

On the bus we met a really nice girl from China, and we asked her what her plans were. She had reservations at a hotel. Once in the city we practically stalked her back to her hotel room in hopes they might have space for all four of us. They did, and it was not any more expensive than a hostel, with private rooms, hot showers, and a delicious breakfast. (it was the Hotel Cristello in case you are ever in Courmayeur. It was the nicest hotel I’ve ever stayed in).

Actually the whole experience of being in Courmayeur was complete rest and luxury after our hard trip. We went to dinner with our new friend from China, ate pizza and gelato, and when we took a ski lift up the mountain one day my dad found an endangered white swallowtail butterfly that only lives on the highest mountains. After 2 days we got a bus back to Chamonix that took the tunnel under Mont Blanc.

We are still tired. In fact, I feel like I will never not feel tired. The Teenager says he will never complain about a boyscout hike ever again.