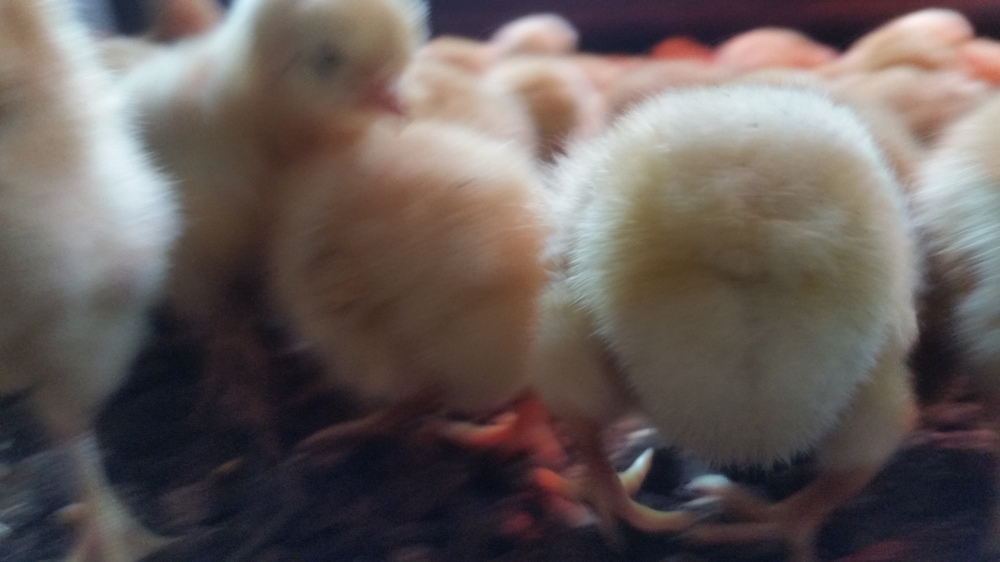 The morning Ethan went to pick them up at the post office, the lady who has a strange phobia about handling birds was unfortunately working the desk.  Somehow she’s always the one that ends up handing over the baby chicks.  She made him wait for awhile, in the hopes that someone else could fetch the box of chicks out of the back, while the other mail-room employees made fun of her.

After Ethan had waited for half an hour while the only other service window remained clogged up with a woman who had something enormous to complain about, the bird-phobic lady finally wheeled the chicks over as far as they could go on a mail cart, and made two attempts to pick them up before she was able to hand them over the counter, exclaiming, “Oh Jesus!  They’re touching me! Oh my god!”

She survived, and luckily, so did all the baby chicks.  102 were peeping and scurrying around under the brooder lamp just a short while later.  These are the first of this year’s meat birds, and they all arrived healthy and well.

When we first began raising meat birds, we started out with the monstrous Cornish X Rock birds.  We discovered that they were difficult to keep alive and happy, mostly because they are bred to the edge of survival for maximum production.

Those Cornish X Rock birds grew to be enormous very quickly, but they would keel over and die from over-eating until we realized you have to keep the food and water a certain distance apart so they are forced to exercise a little and can’t just settle down to eat themselves to death.  Even so, they spent so much time lounging and inactive, they would develop breast blisters and leg problems.

We tried a few other kinds of bred-for-pasture chickens, and were disappointed with the consistency.  One batch would grow out well, but another one would be small and runty.  We thought maybe would try the Cornish X Rock birds again, and get the “straight run” option in hopes for a larger number of the smaller, healthier females.

Then we discovered Freedom Ranger chicks, and decided to try them.  We really didn’t want to raise the sickly factory-breed birds again.  They never really seemed like chickens – just eating/growing machines.

We were surprised by how strong and healthy the Freedom Ranger chickens were.  Bred for the French “Label Rouge” for free-range poultry, they grew out into strong, healthy birds with beautiful red feathers.  There were no breast blisters, no leg problems.  They were aggressive foragers, and thrived outdoors on pasture.  They dressed out beautifully with yellow skin and large breasts.

We are excited to have meat birds again, which we have not raised since Clothilde was born.  It will be great to have some delicious roaster chickens, not just tough old stew hens and roosters!