The onions are bulbing beautifully.  This year we were careful not to water them, and they are keeping very well.  They are very strong – I’ve never shed so many tears while slicing onions before.  Through gardening, I have not only been impressed by how much flavor home-grown vegetables have, but also the remarkable lack of flavor in store-bought produce.  These onions are sweet, but they also make you sit up and sing.

This recipe is for the classic “French Onion Soup,” which of course is only called Onion Soup there – sort of how French Toast is actually called Lost Bread in French (because it was made from old, stale bread).

I’ve come across many variations of French Onion Soup here in the states.  Years ago I worked at a small cafe in Black Mountain, North Carolina that served a particularly awful version – red onions simmered with a dash of cheap white wine, a slice of American-style provalone cheese on top, which was then sort of melted in the microwave (it was high-class American food – it is always horrifying to see what we can do with traditional peasant cuisine).

Because this soup does not contain meat, it is in the Potages Maigres section.  The recipe calls for broth or water, so this soup could be vegetarian or not.  I made it with some broth from a pot-au-feu, and it was very rich.

Peel and cut in thin slices four medium onions, throw into a casserole where you have waiting a good bit of melted butter, sautee your onions (without burning), and then moisten with boiling broth or water, and stir with a wooden spoon.
Salt and allow to boil for a quarter of an hour.
Take your soup off the fire, and pass through a mortar and pestle to reduce the onions to a fine purée, and return to a boil.
Line the bottom of a soup tureen with a layer of slices of bread, and cover with a layer of grated parmesan or Gruyère (for four people there must be at least 200 grams), a pinch of pepper, and thus your bread and cheese are in their places.
Pour the boiling liquid over, and, if you have it on hand, add one or two spoonfuls of creme fraiche, and serve without delay.
If your oven is hot, you can put in your onion soup.  It will be even more savory.

4 Medium onions
A large pat of butter
1 quart broth or water
Salt to taste
Several slices of good-quality bread
At least 8 ounces of grated parmesan or Gruyere cheese
pepper
Creme fraiche (optional)
1.  Peel and thinly slice the onions.  Melt the butter in an oven-proof soup pot and add the onions.  Let them cook gently, until they are soft and clear.
2.  Meanwhile, in a separate pot, heat the broth or water to boiling.  When the onions are soft, pour in the broth or water.  I would suggest not pouring it all in at once, but adding it until you get the brothy-ness how you want it.  Add salt and let it simmer for 15 minutes.
3.  Take your soup off the stove and blend it (I did not even try the mortar and pestle!  I used a hand-held blender).  If you don’t have a hand-held blender, it can be blended in batches in a blender or food processor.  After it is blended, return the soup to the stove and bring it to a boil again.
4.  While the soup is heating again, line either a soup tureen or individual bowls with bread, and cover with a generous layer of grated cheese.  When the soup is boiling again, pour over the bread and cheese, add a couple spoonfuls of creme fraiche (if you have it), and serve immediately.
Notes:  I made this entirely on the stove top, and did not try the oven version.  There are no more details included, but it sounds as if you would put the soup in the oven at the end, when the bread, cheese and broth have all been assembled.  I would begin pre-heating the oven to 350 F before getting started with the recipe, so it will be nice and hot, and would check on the soup about every five minutes or so to see how it is getting along.  As a guess, I would say leave it in about 15-20 minutes.
I’ve seen American versions of French Onion Soup that call for floating the bread in the soup, sprinkling cheese on top, and toasting it under the broiler.  The oven heat referred to in the recipe would not be like broiling, rather like baking instead, and the cheese is more integrated into the broth, so I would just use the regular oven for heating it, rather than the broiler. 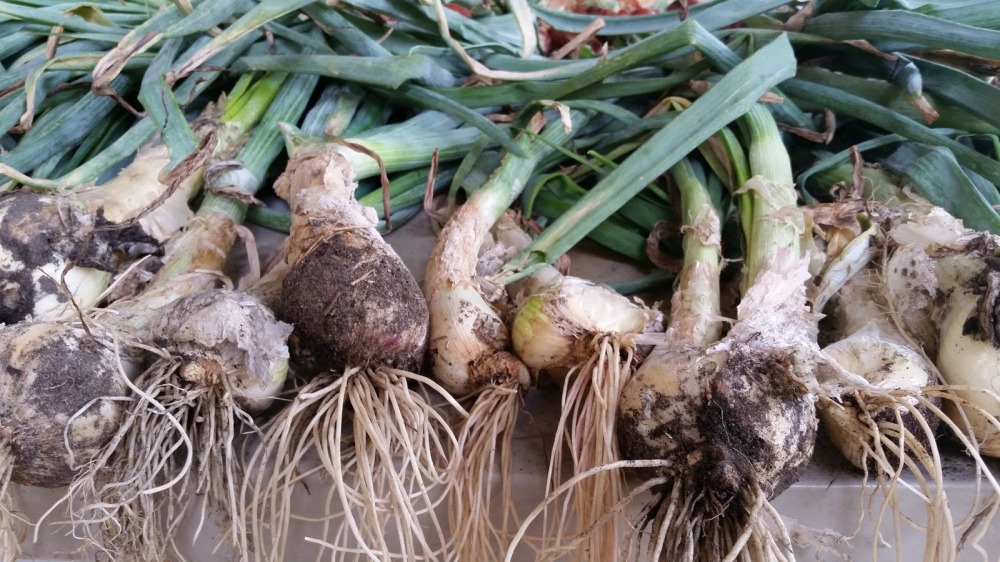