Skip to content
Ethan uncovered this adorable little rabbit when he moved the chickens through a thick patch of Spanish needle in the garden.  It tried to run away, but he caught it again easily, and it squeaked loudly.  It had a litter mate that he unfortunately stepped on by accident, before he even realized there were rabbits there.

Clothilde and I walked this little bunny up to the second grazing line.  I didn’t want to hurt it, but I also didn’t want it in my garden (are THESE the bunnies who were eating my collards and broccoli???).  Clothilde and I held it for a little while, marvelling at all the different colors and beautiful wild markings on it before we let it go.  It hopped away.

A few days later, I was on that line with Clothilde, showing her how to throw the rye, clover and oat seeds up so they scatter nicely on the pasture.  I was looking up at the huge moon above us, and I heard a horrible squeak…

I stepped on that same little bunny!  It was hunkered down in the middle of the field, under a blackberry bush.  It’s nose was bleeding, and it was thrashing, and I could tell it was dying.  I felt so bad!  I hadn’t seen it, or even expected a little animal there.  I was shocked that it hadn’t run away for the denser brush at the edge of the field.  Clothilde didn’t notice, and I didn’t tell her about it, because I felt so awful.

I am sure there was something not right about those bunnies.  I’ve never seen little bunnies that were not fast as lightening if there was something big tromping around (as I was).  I thought of the demon-disguised-as-a-deer that unwillingly tricked Rama into leaving Sita, that lay down for him to kill it because it wanted to be released to a new existence.  Ahh…who knows. 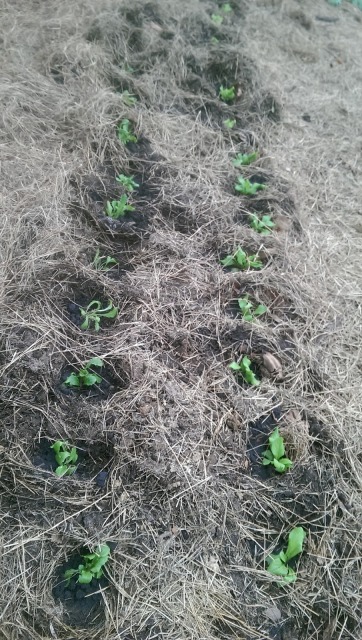 Well, despite having baby bunnies in it, the garden is doing well.  I got all my lettuce planted.  It seems to be thriving, and I hope we will have glorious salads soon!  The only time of year we get big bowls of fresh green stuff! 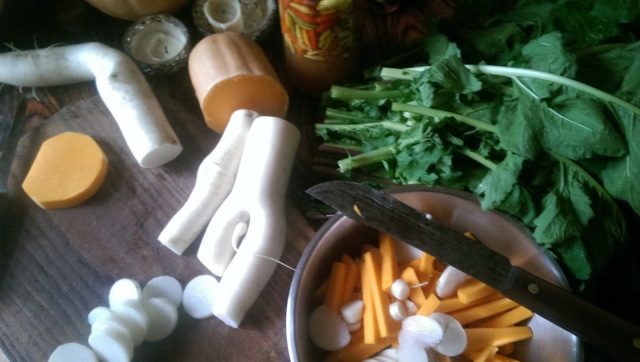 I pulled a bunch of the big radishes and made radish and pumpkin pickles again, as I had last year.  They were so good last year, but the weather was so cool and everything was so sweet.  The radish pickles I made a few weeks ago are very bitter and no one wants to eat them.  I replanted the radish row in hopes we’ll get the rains and cool weather in January.

I did a turnip trial this year – I picked four kinds – first my old favorite, purple tops, then another favorite I have grown for years, Scarlet Ohno turnips.  I like their smooth leaves.  I wanted to grow those side-by-side with the other turnips to compare.  The other ones I picked were the Amber Globe and White Egg.  I picked one of each the other day to try them.

The purple tops and the red turnips were the sweetest and had the best flavor.  The white and yellow turnips were strong and spicy.  I am also having problems with root maggots this year, something I have never had happen before.  I suspect the very hot weather is the problem.  The roots are just rotting and turning to mush before I can pick them.  It seems to only be affecting the yellow and white turnips, so it’s possible they are susceptible to it, while the purple and red ones I usually grow have always been fine because they are resistant.