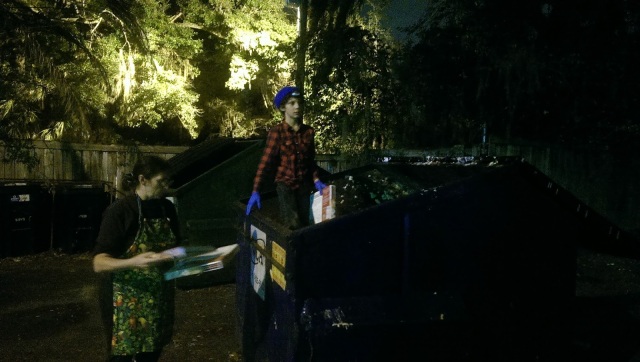 Only two days shy of the anniversary of the last time the freezers at “Earth Origins” corporate natural food store crapped out, they did it again.  We had already had an insanely lucky day – the first part was taken up with a friend-of-a-friend who had demolished an old hay barn and had a barn’s worth of lumber and sheet metal we got for a super discount.

And on the way back home I noticed some tiki torches in decent condition set out at the curb in front of the neighbor’s house.  Ethan has wanted tiki torches for out at the farm for ages.  He had talked of buying them for awhile, but we never got around to it.  He walked down to grab them while I watched the kids playing in the front yard.  Mirin was wrestling rather roughly with our brutish neighbor kid, and I was giving them advice.  Rose and the brutish neighbor girl were doing cartwheels on the lawn.  Ethan returned shortly, not only with the tiki torches, but also with two bikes in great condition – and one of them fit Rose perfectly.  The neighbors are moving to Delaware, and they were glad to pass them along.

This was a better coincidence than I can say.  In the past year Rose has really taken to riding her bike, but her old bike is too small and recently broke beyond simple repair.   I’ve had “bike” on her birthday, and then her Christmas list, but wasn’t sure how we were going to be able to afford one this year.  But it seems the junk gods have provided.

And not only did they provide the bikes, but they also provided some much-deserved karma.  The brutish neighbor kid, Kollin (yes, spelled with a K, and double L’s), who is always teasing and tormenting Mirin because we insist he wear his bike helmet, was given the other bike, since his bike (in his words) was “fixed beyond repair.”  Mirin reported that he was walking back to our house from next door when Kollin was riding the new bike around in the dark.  He suggested Kollin get a bike light, and Kollin took the opportunity to rudely make fun of him about having to wear a bike helmet again (he never stops doing this.  It makes me so angry.).  Then he said, “Watch how fast I can go!” and wheeled off down the road and back again very fast.  He tried to brake when he got back to Mirin, but only the front brake worked…..richly deserved.  I’m sure if there were a few brain-cells that didn’t survive, it won’t make much difference with him, anyway.

My mom was the one to bear the news about the Earth Origins freezer outage.  We wanted a quiet evening that night, but Mirin insisted we go – he thought he might get some ice cream.  He suited up in professional hipster dumpter-diver gear – head lamp, hat (to keep off the hummus, Veganaise and squashed Earthbalace), plaid shirt (long sleeves), jeans, rubber boots.  We were the only ones there at first.  The employees told us the manager had wanted to put poison soap on everything to punish dumpster divers, but the employees managed to talk him out of it.  My mom is a beloved regular customer, and they made allowances for us in that we helped unload the carts into the dumpster and picked through to find what we wanted.  We didn’t actually get much out of the dumpster itself.  I couldn’t believe how much was being dumped.  Cartload after cartload – most of it yucky vegan processed stuff we don’t eat – but other people do.  A couple of vegan shoppers stopped by to see what was going on with the head lamps and the kids running around in the parking lot.  Mirin dug out all the fake soy food we had tossed aside, and they were so excited.

We called everyone we thought would be interested, and finally a bunch of people showed up.  It was quite a party.  Ethan reflected on the best quotes from last year’s dumpster dive:

And “You know,  I never thought I’d say this, but I think I have enough Earthbalance.”

Clothilde had a blast running around and trying to get into disgusting things.  I managed to keep her mostly clean with constant supervision.  They are such lucky children.  How many other kids get to go dumpster diving?

The best thing we got was a lot of expensive frozen organic fruit.  Almost everything else was microwavable processed frozen food in packages that we would prefer not to eat.  We saved some organic burritos with decent ingredients and had them for breakfast.  We struggled to get the packages off – I think I’ve forgotten how to do that – and ended up cutting them open with scissors.  They were – blah.  Starchy.  Bland.  Unsatisfying.  I can’t believe people pay that much money to eat that.  I much, much prefer the clean, fresh food from the farm, but it’s so sad to see it go to waste.