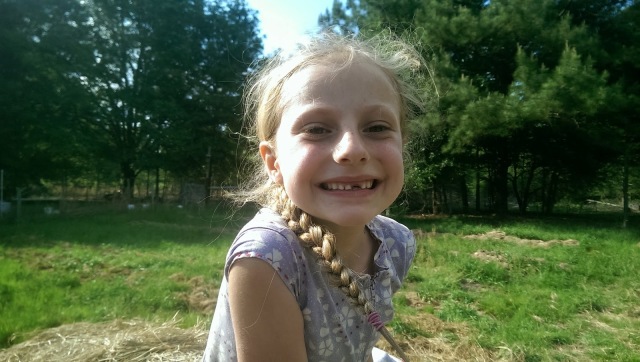 The  biggest news is that Rose is minus one front tooth now.  It had been loose for awhile, and despite lots of wiggling and even dreams that it would come out, it didn’t manage to until Mirin accidentally kneed her in the teeth, and Clothilde bashed her in the mouth with her forehead during a reckless game all in the same day.  I guess some baby teeth are just stubborn! 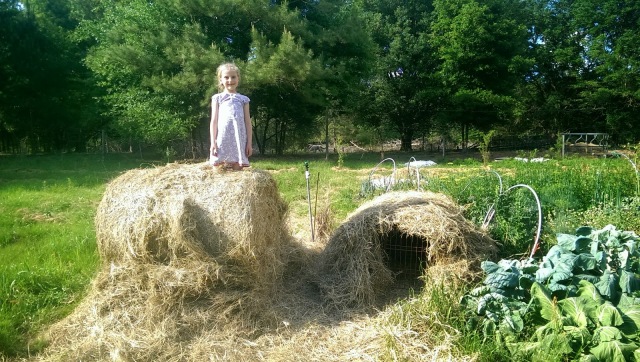 We rolled in a hay bale to mulch between the rows.  The cage has been re-purposed into a hobbit hole.  All three of them spent hours playing in it yesterday while we worked in the garden.  It’s better than a television or an ipad.

She can open the latch from the inside, so it is very fun to be locked in, apparently.  The best part is hiding inside while the sprinklers are on. 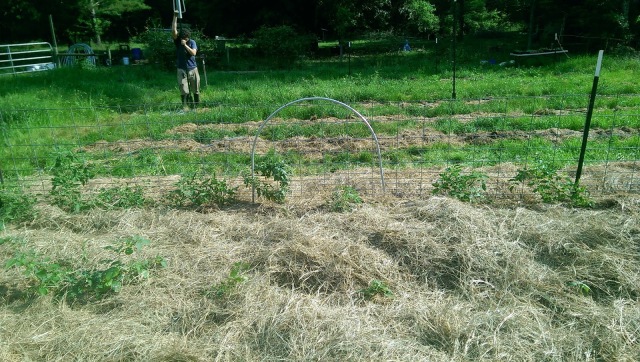 Serious gardening was taking place this week – it looks so nice!  The beautiful rye grass was getting a little too sure of itself and was shading out the tomatoes – so I mulched it with hay, and they look much happier now.  The tomato trellis is up!  Bean trellis is almost complete!

Still lots more to do.  This is the first year we are filling up the whole 3/4 acre with garden.  Ambitious, I know.

The winter garden has exploded in drifts of beautiful flowers.  The swallowtail caterpillars have found the dill.  Why aren’t dill flowers included in more bouquets?  They look so wild and Victorian at the same time. 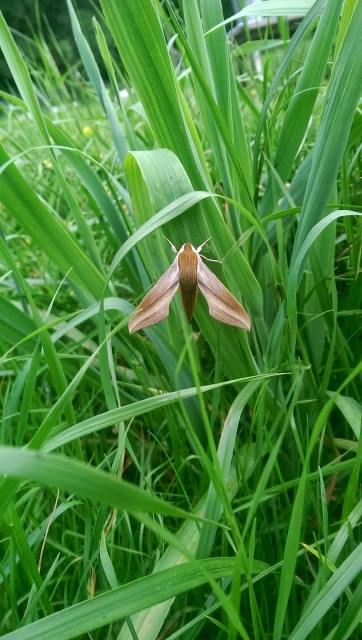 We also found a beautiful sphingid moth in the rye.  I thought it was different than the tomato hornworms, but I wasn’t sure.  Ethan wanted to collect it, if its children were going to eat the tomatoes anyway.  It was so lovely and refined, we just took pictures and let it go.

My heart goes out to sphingids.  My dad raised a lot of different kinds when I was a kid, and I always thought they were interesting.  I’ll never forget the ones he put in a bowl of water to observe their swimming behavior.  And there was the stupid one that crawled down the stem of host plant and drown itself in a tiny vial of water.  Only its face was in, but that was enough.  It didn’t think to back up at all, or maybe it couldn’t walk backwards.  I remember it was like a tiny sack of water, all limp.  We held it for awhile, and then laid it out on a paper towel, and it ended up coming back to life.  My dad blocked up the vial with plugs of paper towel so it wouldn’t do that again.

This one turned out to not be a tomato hornworm.  It is a tropical one that eats plants in the coffee family, such as Partridge Berry (Mitchella repens).  It had the most beautiful scales on it.  It warmed it’s wings a minute by vibrating them, and then went along its way. 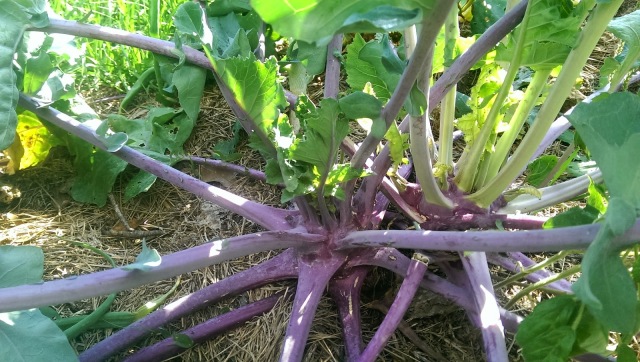