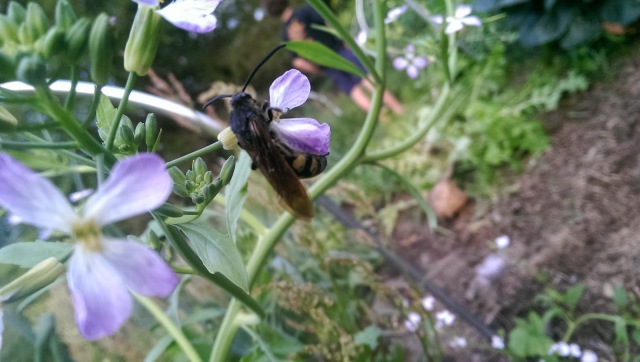 Man, I’ve been sick.  It wasn’t one of those colds that allow you to still shuffle about your day – it was one that knocks you out.  But I’m better now, and resting was enforced.  It’s been awhile since I’ve been so sick.

I went to the farm for the first time this week yesterday.  Matilda was mad at me for being gone.  I could tell because she was extra slow getting into the milking shed.  She dawdled and dragged her hooves, and stopped to crop up any green thing along the way.  Once in, she smacked me about the head and shoulders with her tail while I milked.  I guess I was missed!

It was difficult to be out there, because there were so many projects lying about that I didn’t feel up for – mulching the potatoes.  Planting the tomatoes.  Building yet another garden bed.  Starting seeds.  It was all calling to me.  It was frustrating.  But while I was resting through this illness, I also realized that life has just been stressing me out way too much.  I realized I am almost addicted to that stress, the excitement of having too much planned, to the point that it isn’t fun any more, it’s overwhelming.  And I’ve been taking everything so seriously.  It’s time to lighten up, and let things not work out sometimes, to be happy with what we will have this year.

It’s funny how something unpleasant – like being really sick, can actually be a good thing sometimes.