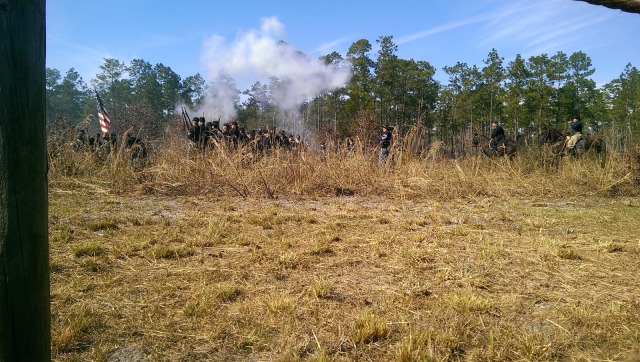 Last weekend found us at the Olustee battlefield for the annual reenactment.  We’ve gone most years, but we missed last year which was the 150th anniversary of the battle.  Ethan was a major civil war buff since he was a kid, and he has an 1861 reproduction black powder muzzle loader he fires off for 4th of July and New Year’s.  Back in his college days, he used to borrow a uniform/costume from a friend and participate some of the reenactments around Florida.  He still does every now and then, although it has been more challenging since getting dairy animals and having Clothilde.  Mirin first went to Olustee when he was a year old, but he slept through most of the battle, cannons and all.

This year we only attended.  It was more than a mile walk from where we had to park, and we could have opted for a bus shuttle, but watching all the Average Americans lumbering towards the entrance inspired us to just strap Clothilde into the Ergo and not complain.  (If the 500-lb guy in a massive camo jacket and orange shorts eating Cheetoes and drinking soda along the way could do it, I should be able to, too, right? right?).  Unfortunately only Ethan had good walking shoes, so there were some blisters to be had.

I love the way the reenactments really bring history to life – some of the participants get really in “character” and it’s very interesting.  Every year is a little bit different.  The horses charge out, the black powder guns start firing, and then the cannons start booming.  Mirin has been interested in history this year, and is already looking forward to when he will be old enough to participate – only in about six years.

While she really enjoyed the horses, Clothilde was deathly afraid of the cannons (but at least she seems to have lost her golf cart phobia – she can even say “golf cart” although it isn’t particularly articulate), so we went off and meandered around and only got to see the clouds of smoke through the trees, until the portapotty-suctioning truck drove us further away.

There was wonderful people-watching to be had.  I saw an old lady that made me think Clothilde might be like one day.  She had a big puff of very white hair (like Clothilde), and she was driving her electric wheelchair super fast while her middle-aged daughter ran beside to keep up.