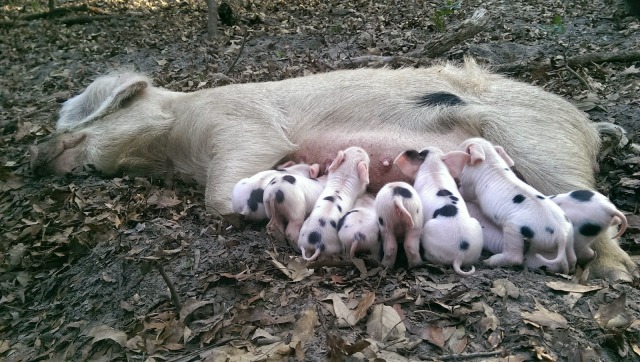 Star had her second litter of piglets over the weekend!  This time we could tell that she was getting close – her udders started to swell, and she looked well, pregnant.  (still no piglets from Bee – we are trying to figure out why).

She had TEN piglets!  That’s a lot of newborn babies to look after!  She is an excellent mother, and made the sweetest little nest in the fallen oak leaves.  When she lays down with them, she fluffs the nest up.  Because there are so many piglets, this time not everyone can find a nipple as easily as when there were only five, and their frustrated squealing distresses her a little.  It’s funny how whining is a cross-species phenomenon.  There are so many of them, it’s hard for her to shift around so they can all get nipple coverage.

We separated Bee and Trespassers is in his own fence, so she has some space with her babies.  They are all doing great