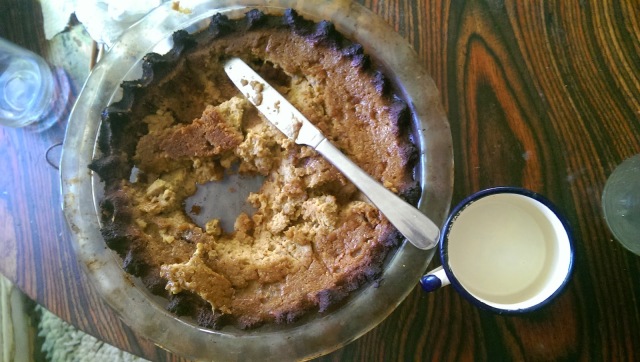 This is what happens when a pumpkin pie is unsupervised with a toddler for five minutes….

It had turned out of the oven to be such a nice pumpkin pie.  It had grain-free gingerbread crust and it smelled amazing.  I was just in the other room, lying down for a few minutes and trying to recover from this past week’s waking at 3am with intense head congestion that made returning to sleep impossible.  I had my ear out for Clothilde the whole time.  She was so quiet and happy, I should have known, but I forgot I had left the pie cooling there.  All I could hear were little clinkings from her cup and other dishes, and some intense toddler breathing.  She must have downed at least half of it.  All that was left were little scrapings of crust and a couple of inches around the edges.  The little bits that were left were exceptionally good, at least.

We had an intense day yesterday.  Rose LOVED her rehearsal, and returned home as her yapper-type Rosie counterpart.  It was as if they fed her bowls of chocolate-coated expresso beans or something.  I thought she would be tired!

Poor Mirin had a rough night last night.  On the advice of his twenty-something uncle, who complained that he smelled of woodsmoke, he slathered grapefruit essential oil into his hair as a cologne or something.  It was overpowering and awful.  Just being in the room with him made your eyes water, and for me triggered an unusual bout of asthmatic coughing (I am already compromised with this lingering cold).  Several hot showers did not remove the smell, and we found could not stand to spend the night with him.  He huffed off next door and spent the night on the grandparents’ couch, instead of our couch, for some reason.  I honestly don’t know how he could stand himself that way, but he seems to have slept decently well, although mood-wise he is still grouchy about being treated like a skunk-sprayed dog.