Rose ended up with no less than two birthday cakes because a consensus was never reached about whether the cake would be strawberry or raspberry.  It served the dual purpose to ensure left-overs, as someone around here is very greedy with other people’s birthday cakes.

This is one of my favorite grain-free cakes – It looks and tastes like chocolate, but it is made with carob.  I used coconut sugar as the sweetener (it is not super sweet) and they were filled with honey-sweetened whipped cream with crushed freeze-dried berries mixed in.  I iced it with the Nourishing Tradition’s butter fudge recipe (simply honey, carob, and butter.  I added a little vanilla, too).  They both turned out delicious.  I’m afraid two cakes might become asked for more often.  I guess it’s okay, as long as they are the same kind of cake. 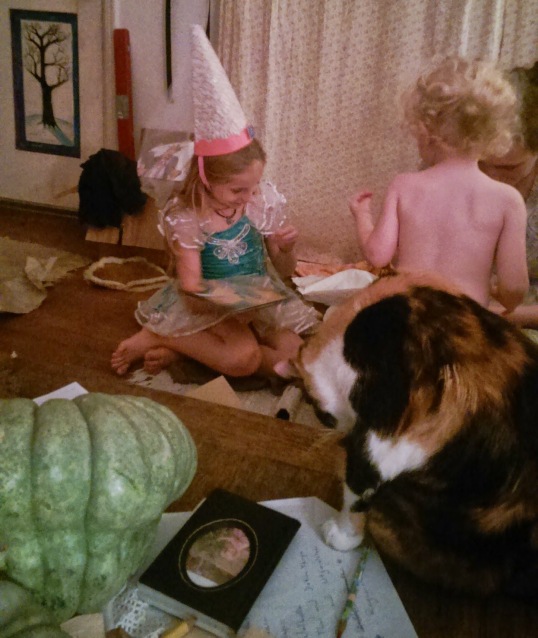 Teasel made sure that she was front and center for opening presents.  Mirin had a terrible case of OSAD (Other Sibling Attention Disorder) and refused to have cake – but he came around eventually.

This morning I asked Rose how it felt to be seven, and she said, “Bigger!”