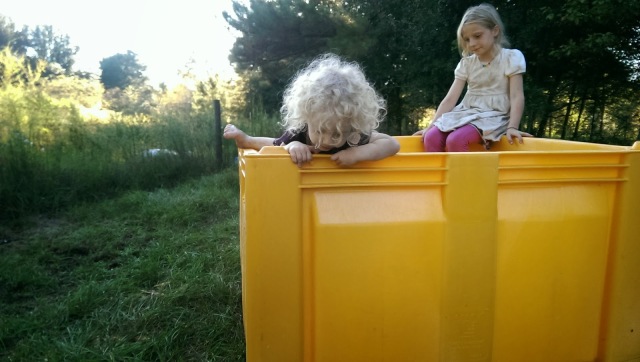 This yellow thing is the bin we get literally a ton of spent barley grains in every so often.  The girls thought it would be fun to play in. 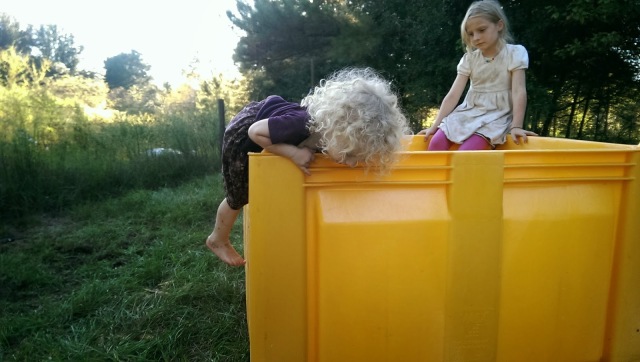 After only a few minutes, Clothilde decided she was bored and climbed out. 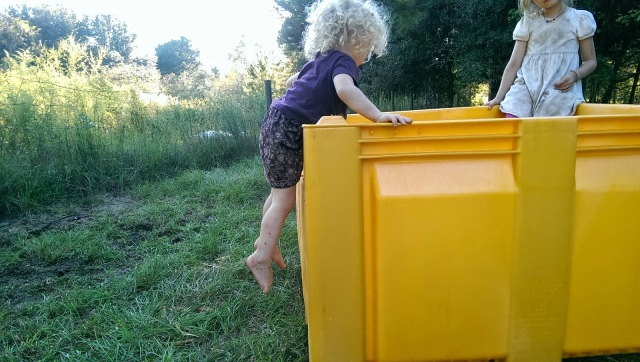 Even though it’s almost as tall as she is.  Isn’t that terrifying? 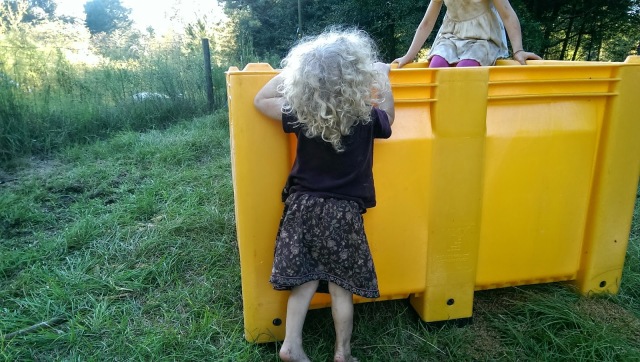 I had the craziest shopping trip with Clothilde the other day.  When Mirin and Rose were small, I used to get compliments about how well-behaved they were.  They stayed close to me and helped me and never whined for anything – probably because I never bought anything other than what we needed.

At some point, that changed.  Now shopping trips with all three children are kind of like a nightmare.  The big kids charge around the store, playing hide-and-seek or tag, hitting each other, terrorizing other shoppers, whining for Larabars, kombucha, dried fruit, boxed cookies, chocolate, ice cream, etc. etc, which I still won’t buy.  They block the aisles and run into old ladies.  They’ve been scolded by other shoppers, but they don’t care.  I talk to them sternly and threaten to leave them behind next time, and they still don’t care.  There’s always a universal sigh of relief when we are steering our shopping cart out the door.

Clothilde is usually strapped to my back in the Ergo, but this doesn’t stop her at all.  Her little arms can shoot out really far and grab things.  She steals apples on the sly, which led to The Worst Shopping Day Ever once when she choked on a piece of stolen apple peel and I found myself in the store holding a handful of baby throw-up (and a stolen apple).

This recent shopping trip was not so bad.  The big kids had been so horrid the time before that I left them with Ethan and only took the toddler.  I thought for sure it would be so easy with just Clothilde.  When we got to the store, she immediately grabbed a little basket and wanted to carry it around.  I thought, “How cute!” and, “Well, that will keep her busy!”  But it turned out not to be so.

Because she had the basket, she insisted on walking, so when we paused by the bulk section it was everything I could do to keep her from ripping all the plastic scoops out and grunging them on the floor while I also tried to scoop dried coconut into a bag and not spill most of it all over myself.  The produce isle was better.  She got to put ginger roots and parsley into her basket.  But then the basket started to get heavier.  She couldn’t carry it, and there was unbelievable screaming when I put her basket on the cart, so we just inched glacially along the aisle.  The people working there all thought it was so cute.  Eventually, it just got to be too slow.  She became distracted by other things on the shelves and started “shopping” herself.  So I took to grabbing her and the basket and tossing them both into the cart, fighting to keep Clothilde in as she pitched around, screaming violently, and wheeled the cart where we needed to go.  Then I had to let her out again or she would have thrown herself out.  The manager even offered us a free cookie so she would stop screaming at one point.

She liked checking out because she could help take everything out of the cart, but once that was done she ran to the stack of baskets and started removing them and putting them all over our cart.  It kept her busy so I didn’t interfere.  When it was time to go I very quickly re-stacked all the baskets and tucked her under my arm and we left.  There was a tough moment when I realized I couldn’t hold on to her while she thrashed so much AND steer the cart, so I tried fitting her kicking legs into the baby seat, unsuccessfully, and the shopping cart slid sideways and started crashing into the front of someone’s car.  Just then I happened to run into someone I knew.  Thankfully she also has a two-year-old and understood perfectly!

In the end I still managed to forget something.  Next time all three of them can hang out at the warehouse with daddy.