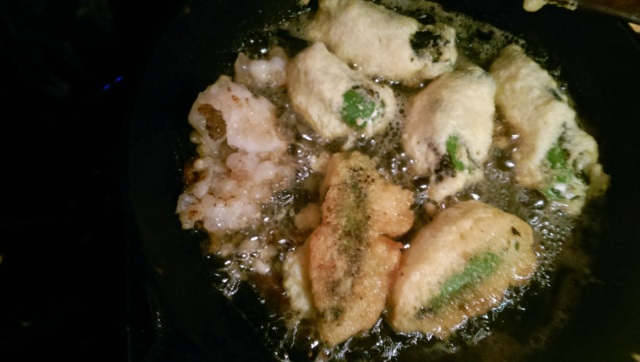 This is a version of Chili Rellenos with a home-grown twist.  Home-grown because I used home made chevre cheese to stuff them instead of the oft-called for hard cheese, and they are not the usual kind of pepper.  These were big beautiful Napoleon sweet peppers from the garden.  (The cornmeal was “boughten” cornmeal this time, but some day it might be a 100% home-grown dish.)

They turned out to be beautiful, flavorful, delicious and perfectly-crispy-fried-brown.  They were so good Ethan made himself almost ill by eating way too many at once.

I should add:  Store-bought chevre is shockingly expensive, and I wouldn’t dream of making this recipe with that kind of chevre.  I make cheese from a gallon of our goats’ milk about every two days, so we have chevre with everything right now.  We’ve got pounds of the stuff.  I’ve been trying to come up with creative ways to get everyone to eat more of it.  Please substitute whatever convenient soft cheese you have on hand if you do not make chevre – kefir cheese, clabber cheese, fromage blanc or strained yogurt cheese would be wonderful as well.  Just be sure to salt it to taste so it won’t be bland.

1-1 1/2 cups chevre or other fresh cheese (I hesitate to give an amount, because it sort of depends on the size and shape of the peppers).

1.  Flame the peppers, either by scorching them in the oven under the broiler, or by setting them over the flame of a gas stove until they are patchy with black roasty spots.  I skewer them and roast them on the stove top.  Allow to cool.  Slice off the top of the pepper and scoop out seeds.  (this is where I differ from other chili rellenos recipes – you really can’t stuff the soft cheese in through the side of the pepper very easily).

2. Stuff with cheese.  Lay them on a dish and sprinkle with corn flour.

3.  Separate eggs.  Mix in a dash of salt, the baking powder and the 3 tablespoons of corn flour with the yolks.  Beat the whites with another dash of sea salt until they make stiff peaks and mix into the yolk mixture.  It makes a very fluffy batter.

4.  Dip the stuffed peppers in the batter and fry until golden and crispy in home-rendered lard.  You can drain them on paper towels if you like. (I have a prejudice against this, but it might make them less oily).