We got rained out again yesterday.  It rained so much the ground was spongy and there was standing water in places that look too sandy to have standing water.  I harvested the rest of the watermelons, because the vine had died.  One had already exploded from all the rain.  No picture, of course.  It was too wet!

We got some beautiful Queensland Blue pumpkins.  I can’t wait to try them.  I’m letting them cure first, of course.  They are supposed to be good keepers.  Then of course more Tahitian Melon pumpkins (love them!), and the first of the Seminole pumpkins were ready.  That’s pretty much it in the garden, except for some very large and very lovely basil bushes: 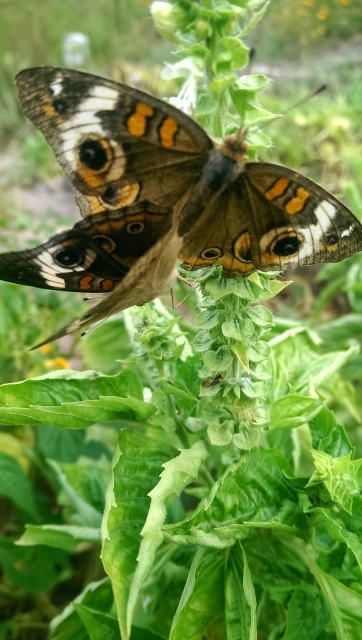 A mating pair of buckeye butterflies on lettuce leaf basil.  There will be more and more of them now that their host plant, Agalinis or false fox glove has grown up and will be blooming soon.

A long-tailed skipper on the cinnamon basil.

Otherwise the garden is a mess of yellowing vines, rambling sweet potatoes, and weeds poking up.  But it’s time to plant for fall!  I started more cucumbers, beans, tomatoes, eggplants, zucchini, yellow squash, peppers, melons and some fall herbs back in early July.  I have started clearing out beds to plant the new plants, which will be ready to set out soon.

On Monday my winter seeds arrived, and just this morning I started some cabbage, broccoli, cauliflower, Pak choy, Bekana, Brussel sprouts, cilantro, dill and calendula, because I’ll admit, I’m kind of sick of eggplant, squash and cucumbers.  I have not had much luck with starting these things in August, but other people do and it works.  I am taking the flats out to the farm because it is slightly cooler there than in town.  If it doesn’t work, I’ll just restart them in a few weeks.  I am determined to find out how to make the winter garden thing work this year!