We’ve been pulling watermelon after watermelon out of the melon patch.  They are finally ripe this time!  The first one we picked sounded perfect, but when we cracked it open it was still only pale pink.  It was still very sweet, which is something I like about this variety.  These melons are perfect – one was even perhaps over-ripe.

It’s been a little bit of a challenge to keep up with it all.  There are still more out there needing to be picked.  Perhaps a dozen plants all planted at once was a little much?  My kids and I have both been saying things I never thought we would:

“You’ve only had one piece of watermelon Rosie.  Are you sure you couldn’t eat another one?”

“Mirin, what do you mean you want me to cut that slice in half?  You can eat all that, can’t you?’

I am thinking of freezing some if I get the time. 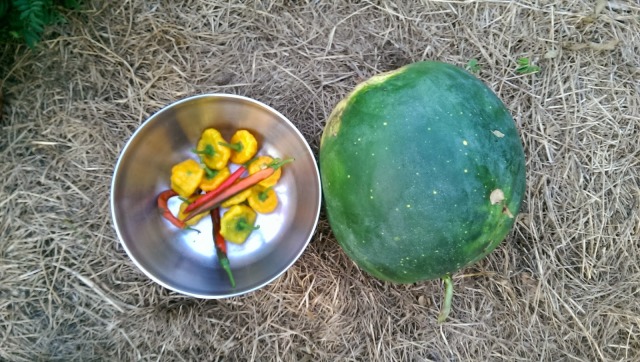 The scotch bonnets are getting ripe!  We are still not sure what to do with them.  I grew them for Ethan, and one plant is making A LOT.  They are a really, really spicy pepper.

We are also pulling a lot of pumpkins out now!  The Tahitian Melon pumpkin will always have a place in my garden!  They are huge and just like a butternut.  We roasted one the other night, and it was super sweet and delicious.  They are also like four times as big as a butternut squash – good for our large family.  And supposedly they keep for nine months at room temperature. 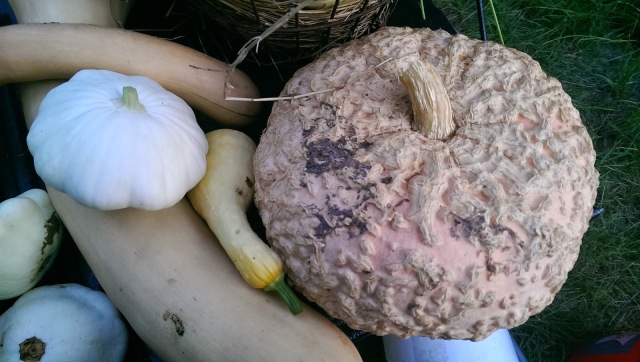 We have about 24 pumpkins stored at home already, and Ethan counted at least 26 on the vines.  Ethan is calling it “The Pumpkin A Week Challenge.”  Some of the pumpkins are large enough to be plenty for at least three weeks, especially the Boston marrows.

The scariest part is that they are still setting fruit!  (Can you see the bumblebees in the flower there?)  Would it be awful if we gave some as Christmas presents??

And a few figs.  I planted this fig tree about three years ago, and this is the first year it has fruited.  They are so sweet to the point of being almost syrupy.  I hope someday it will be loaded with fruit like the pumpkin vines!