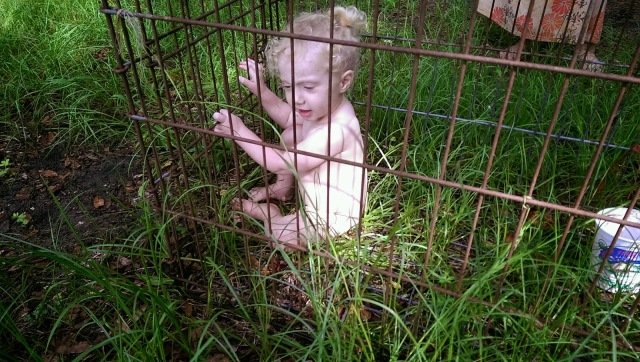 No, Clothilde is not locked up on bread and water (and breastmilk).

When we got our first batch of pigs years ago, we didn’t have anything to transport them in, so the guy we were buying them from sold us this rusty old cage to bring them home. Once when we were getting piglets someone shouted, “That’s so cruel!” out of a car window.  Of course if they had seen the tiny cement enclosure where the piglets had come from, and the beautiful wooded oak forest where they were going to, I think they might have admitted it was worth the short ride in the cage, whoever they were.   They also did not realize the cage’s other role as a favorite kid toy!

It always surprises me what becomes a favorite kid toy.  Of course there’s the old story of the kid ignoring the toy and playing with the cardboard box it came in.  The cage is somehow irresistible that way.  Even Clothilde has fallen for it’s magical, rusty charm.  It’s great to climb on, fun to sit in and shut the door (for some reason), and is so rusty it isn’t easily locked, so it’s not really possible to lock yourself in.  Even the big brother can’t easily lock up the little sister, even when she begs him to for a game.

The cat even likes to sleep in it when it’s brought home.  Once we had a smaller cage in the yard that was going to become the new guinea pig cage.  Perhaps anticipating the small, furry animals, our cat Teasel decided she loved to nap in it.  It had a hole in the wire on the sides, so she could easily crawl in and out.  The house across the street was for sale, and people would always come and look at it.  A nice-looking couple stopped by once when I was out in the yard with the kids.  I waved at them and smiled, but they didn’t wave back.  They talked together, looked shocked, and pointed at me.  After they had driven away, I realized it looked like we had the cat locked up in a cage on the driveway.  Teasel, of course, was doing her usual deep sleep “roadkill impression” with all four paws in the air, so actually it looked like we had a dead cat locked up in a cage.  They didn’t buy the house.

The big kids have been home now for a few days – everyone is still getting used to being in a house with breakable things instead of camping out and being a caveman.  Clothilde seemed to really enjoy being the only child for a change (and a big help, too, as you can see.  She’s helping bring Matilda’s peanut hay for her milking ration).  But she is also glad they are home, although it took a little getting used to at first.  She had to actually play by herself for the first time while they were gone.

There were some very nice arrows made at Firefly, and Rose helped so sweetly at the childcare tent (that was where she wanted to be) with the younger children, that the women working there both thanked her profusely for her help.  I think she might have missed the littlest sister!