A couple of weeks ago, Ethan thought he had noticed Star and Bee in heat, and he thought maybe we should get feeder pigs again this year for next year’s pork.

But on Friday when Ethan went to feed the pigs, Star did not show up to eat.  He went looking for her, thinking that at the worst she had swallowed some glass from the old homestead site, or best she had escaped.  But when he found her, there was a third possibility he didn’t think of.

She had made herself a nest and was grunting softly.  We fenced out the other pigs so she could have some space to herself.  When we checked on her just before leaving late on Friday night, three had been born so far.

Ethan got to see the first two be born.  The first thing he saw was a curly pig tail come out!

By Saturday morning, four piglets had been born, two girls and two boys.  They were nursing and doing well. 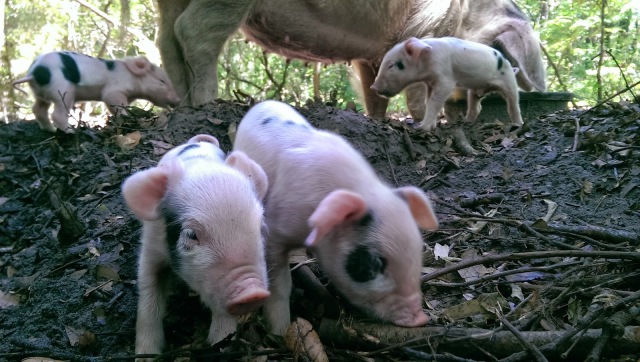 We made Star as comfortable as possible, with her own dish of barley and water. She doesn’t seem to mind us looking at the piglets.  Ethan even picked some up.

I was concerned on Saturday, because Star seemed to be having trouble standing up to eat.  She paused, and then heaved herself up very heavily.  Later we found out she was still in labor…. 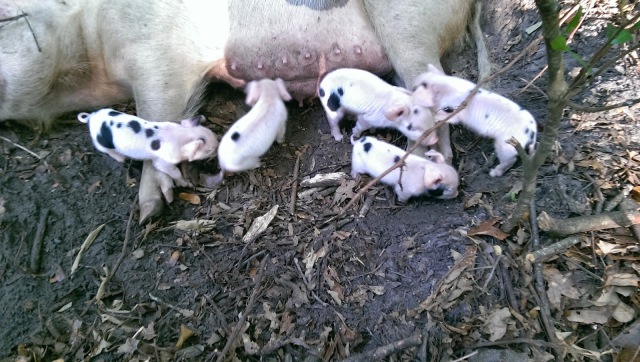 Because another piglet showed up!  It only has one spot.  Ethan says she ran out of spots for that one.