Skip to content
This story that I have at last decided to write about has some sad parts.  It also reveals how little we know about farming, and how gullible we were, unfortunately.  But I promise it has (at least for now) had a good ending.
Last fall we bought a new Jersey cow.  The man who sold her to us seemed really nice.  He had a whole story about it being his daughter’s 4-H cow, and he was selling her now that she was in college.  We’ve always been so lucky with getting livestock – on the rare occasions we do buy new animals.  We couldn’t get very close to the cow because there was another crazy cow in with her.  But she looked okay, and he was even going to drive her to our farm, which was so tempting because it is such a pain to rent a stock trailer.
So we did buy the cow.  We called her Freya.  She was pretty, one of the darker Jerseys.  A few months later, the same fellow stopped by with another Jersey cow.  He had some story about his brother having a micro-dairy, but he had all sorts of tragic things happen and now had to sell all his livestock.  He dropped the cow off and wanted us to send him a $1,000 check (it was a “drive-by cowing”).  But that cow didn’t really work out – I might get around to writing how we got him to pick her up again, but I still have the emotional scars (for the 18 hours she was at our farm, we called her Igor.  Don’t worry, we didn’t give him another $1,000 for her).
When he came back to (eventually) get Igor taken care of, I asked him a few questions about Freya, and he had totally different answers than when we came to buy her.  I realized then that he had totally lied to us.
I had mentioned before that a calf was born this spring.  That was Freya’s calf.  Unfortunately, right after the calf was born, she became very ill, and lost a lot of condition very quickly.  The vet looked at her, and we thought perhaps it was a virus that dairy cows will get in the winter.  She was still up and eating, so we increased her ration, as per the vet’s advice, and tried to get her to gain some weight.  It was hard to get her to eat enough.  After a month, she was getting better and better, and had gotten her appetite back.  Then we got a sudden cold rain storm, and she relapsed and ended up going down.  We called the vet and tried to get her back on her feet, but she was too weak to even hold her head up.
When the vet came to look at her, she said she had pneumonia and was struggling to breathe.  She looked in her mouth –  something we had not done (to our cost) before we bought her, and realized that she was a very old cow, and really should not have been bred.  The vet advised us to put her down, which we did.  It was a very, very sad day for us.
Her calf (Sampson) was a month old.  We put him out with the other cows.  He was glad to be among them, and Matilda was very glad to finally be able to give him a good kick.  Every time I took her down to be milked, she would stop and shake her horns at him through the fence, and he would be saucy back and kick his heels at her.  The first thing he did when he got out was to go try to nurse on Matilda.  She sure showed him.
Since then, we noticed he was following Flora around.  I’ve heard her mooing and mooing, not realizing it was because of him. 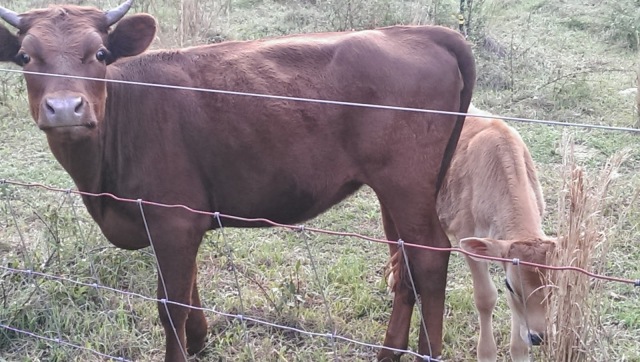 They will often get out of the electric fence together and go eat all the good stuff before the other cows get to it.  The other day I was watching him, and realized that she is treating him like her calf.  She’s looking out for him and grooming him.  She’s been mooing when he gets “lost.”

I thought it was so sweet that she is so motherly towards him.  She’s only 18 months, and has never had a calf of her own.  She was there when he was born, and I wonder if she had bonded with him then, because she was so upset when we moved her out away from him afterwards.

So he is not motherless after all!