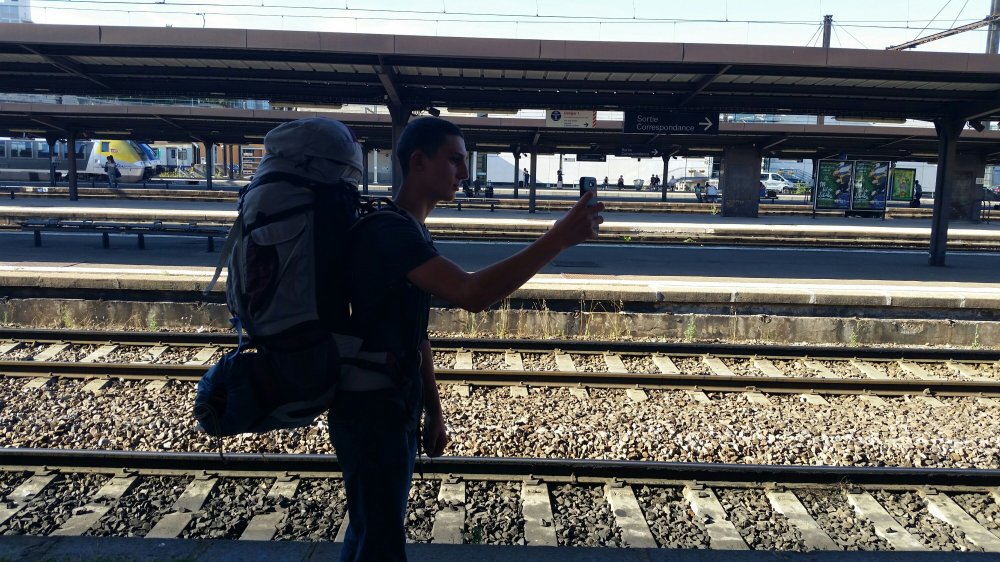 We get on a train heading for Lyon Part Dieu at a fairly early hour, while Teenager whines that his ear buds are broken, and that I “owe him a new pair”. We are also minus a green t-shirt that was left behind in Savoie – a victim of the Teenager’s habit of strewing all the contents of his backpack all over the floor of wherever he is staying. 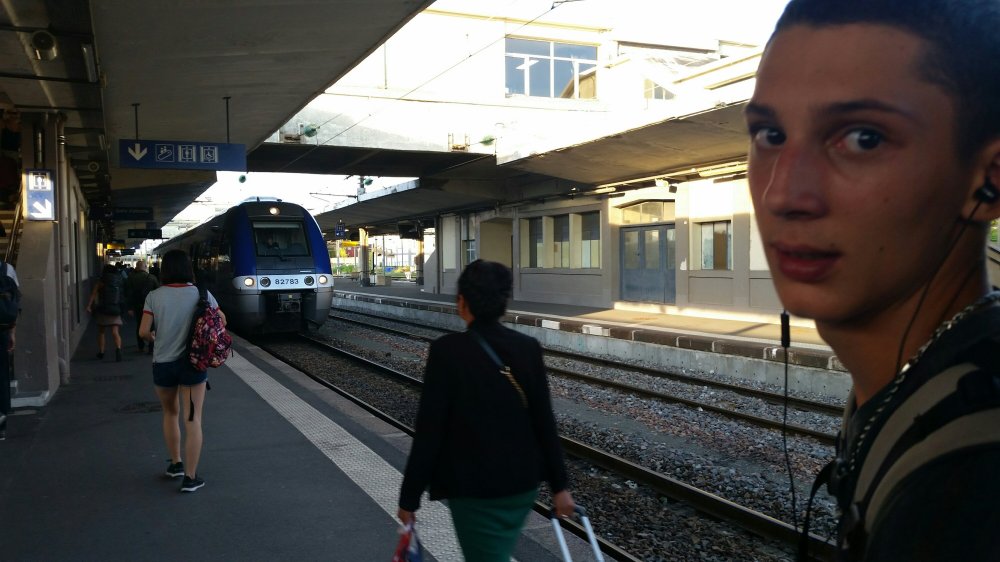 I try taking deep breaths to calm the periodic anxiety attacks I keep getting from memories of train scheduling problems at Lyon Part Dieu, the entire tortuous night spent wandering aimlessly around the station until an early train allowed me to escape, not once but BOTH times I have been there. Not to mention the time my ex boyfriend Vincent and I once didn’t get off a train there on time and almost got parked at a distant corner and locked in for the evening. 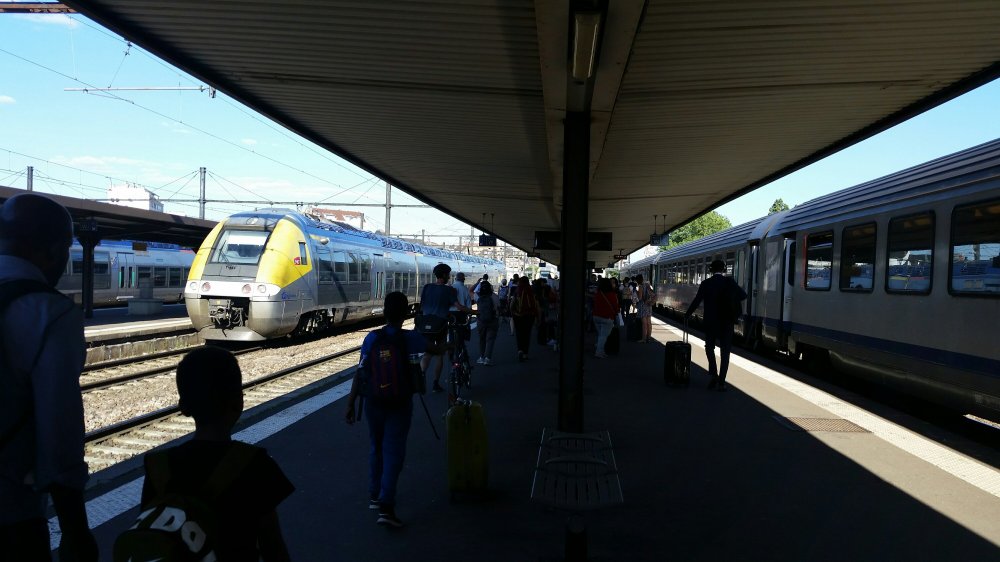 I’ve never been there and NOT had something go very wrong. It’s the French train station version of the Atlanta airport, and just the thought of getting stuck there overnight with the Teenager makes my stomach hurt.When we get to Lyon (predictably) there are problems… the train to Stasbourg we need is one of the super fast TGV trains that require a reservation, and it’s full. We make plans to go on to Dijon, and then Mulhouse, and then Colmar, our final destination, but we are stuck in Lyon for 2 hours (at least not 12). We park ourselves at a very familiar-looking corner to wait. 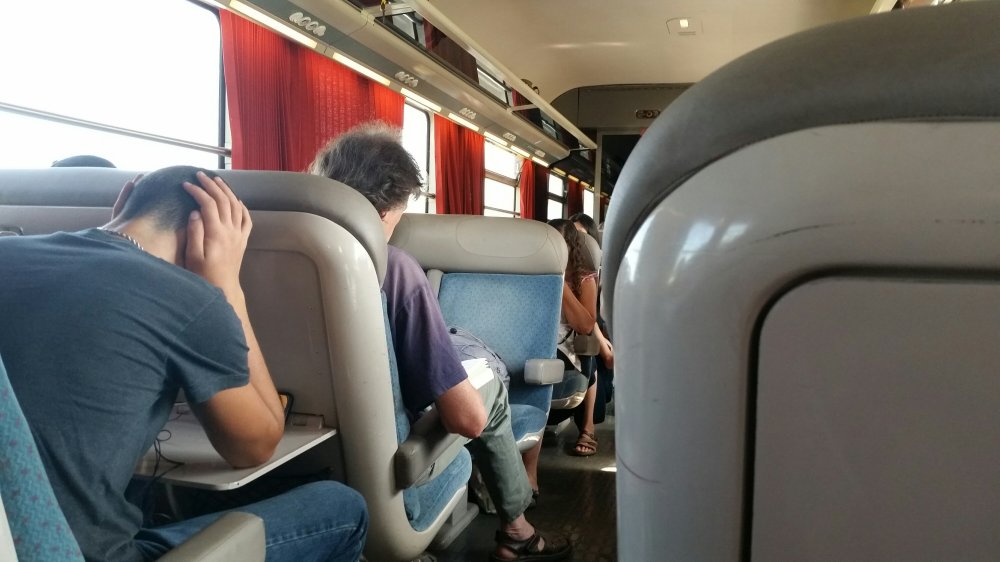 Tensions mount as Teenager has meltdown over buying new set of ear buds immediately with the last of our euros. It ends with him storming away through the crowd after proclaiming he will “just steal them.” Encounters gendarmes armed with the French version of AK-47’s as he vanishes around corner.He comes back awhile later without stolen ear buds, demanding to know where an exchange bureau is located, so he can spend his own money on them instead. Reasonable suggestions that he ask the numerous station employees are met with derision at first, but eventually common sense wins over, and he is directed to the information center. 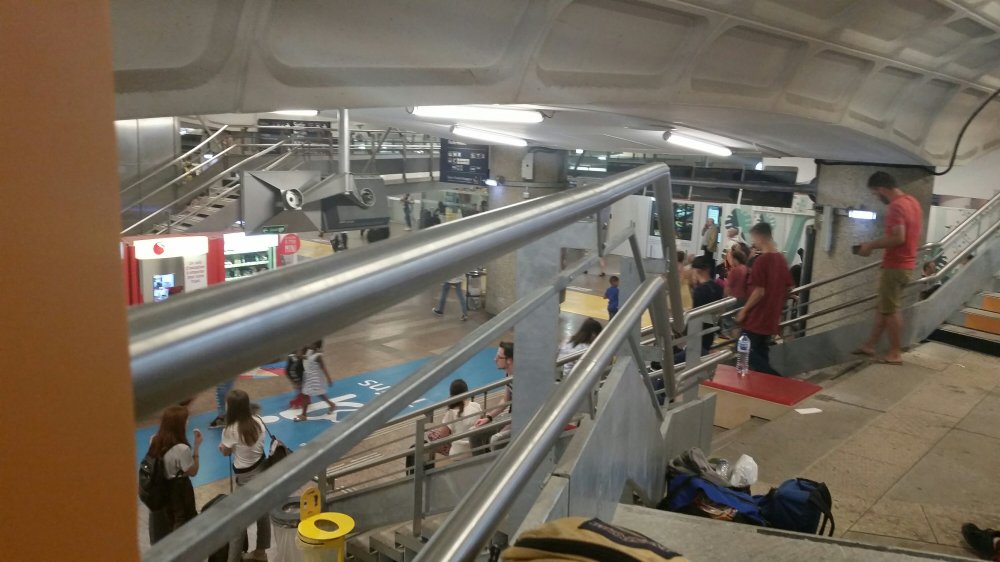 Teenager comes back and demands I tell him where information center is located while I am in the middle of eating a rushed lunch standing up by the back packs. He eventually is made to see the doorway with the enormous red letter “i” on it. 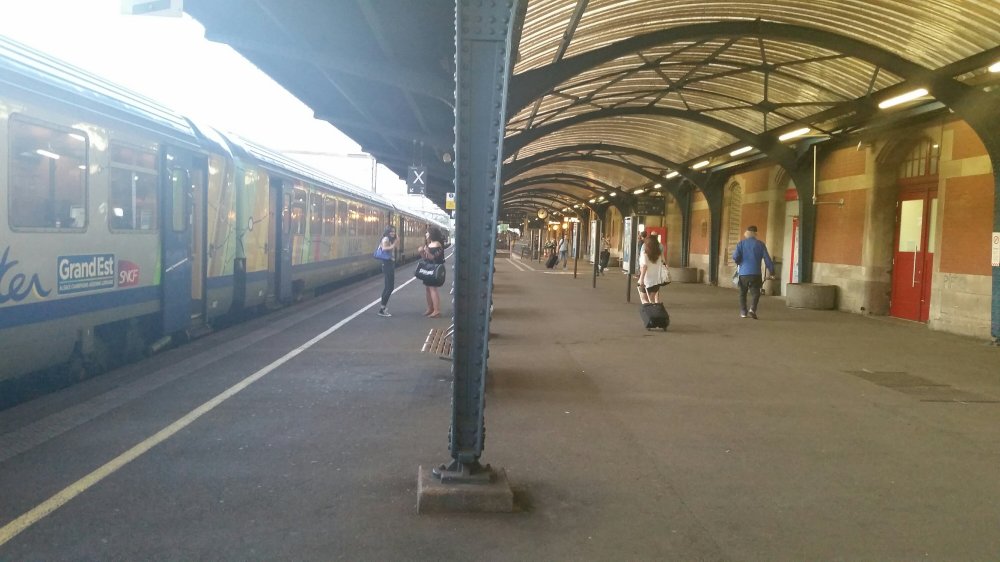 Employee at information center tries to direct Teenager to exchange bureau right behind him, and when Teenager proves too dense to see where it is pointed out, asks if he needs to borrow his glasses. Teenager returns in a huff with new ear buds, ranting about European customer service.After a crowded sauna-like train ride, we arrive at Mulhouse and eat a few bites of salad and sandwich between trains, and are menaced by local pigeons. 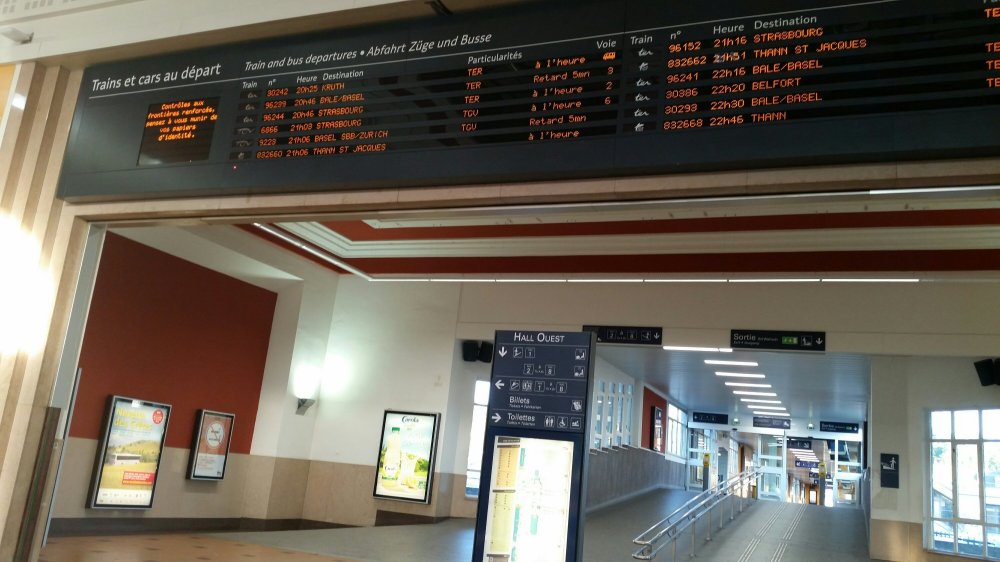 The next train we get on is a TGV, and the Teenager is excited to see what it is like. The AC is very agreeable. It’s hard to tell how fast you are going. TGV’S glide over the countryside at something like 200mph. Herds of cows, foothills, and the golden stubble of cut hay and wheat fields flash smoothly by. The only reference point is when you pass another train or go through a tunnel in a few rattling seconds of sucking, ear-popping wind. 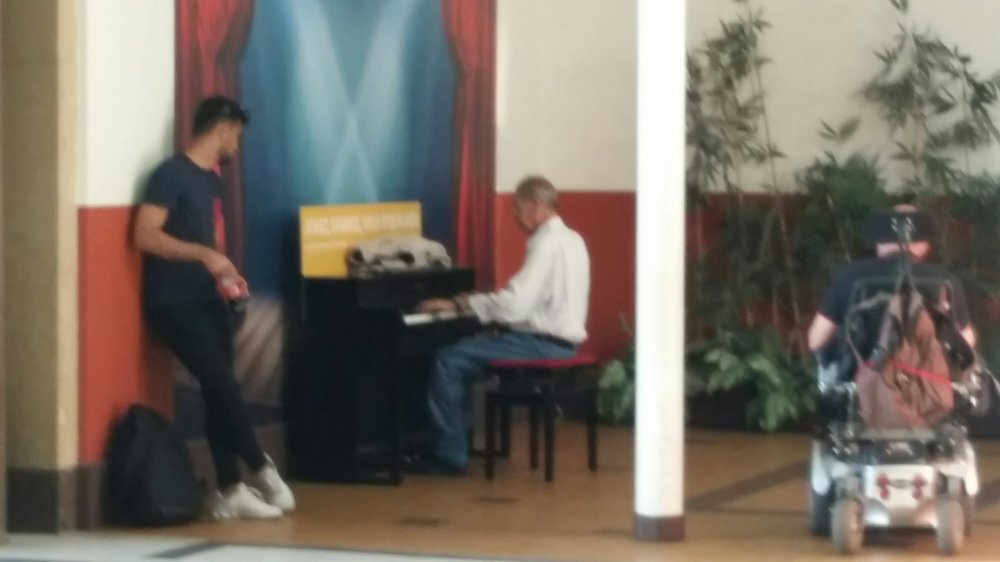 When we arrive in Mulhouse, someone is playing the piano. Apparently there are often pianos at train stations for people to play. It is some complicated classical piece that sounds familiar, and I gave the elderly gentleman who was playing a little round of applause at the end. He called me over and asked for requests, and when he found out I was American, played a Frank Sinatra song for me. We had to rush to get to the next train once it was over.On the last train now, we sit down beside a lady with a little boy that I’ve seen all day on different trains going the same way. When I first saw her at Chambéry, I knew she was someone I would like, and especially later when I saw her nursing her toddler. We start talking and have a great conversation about herbs and children and natural medicine. 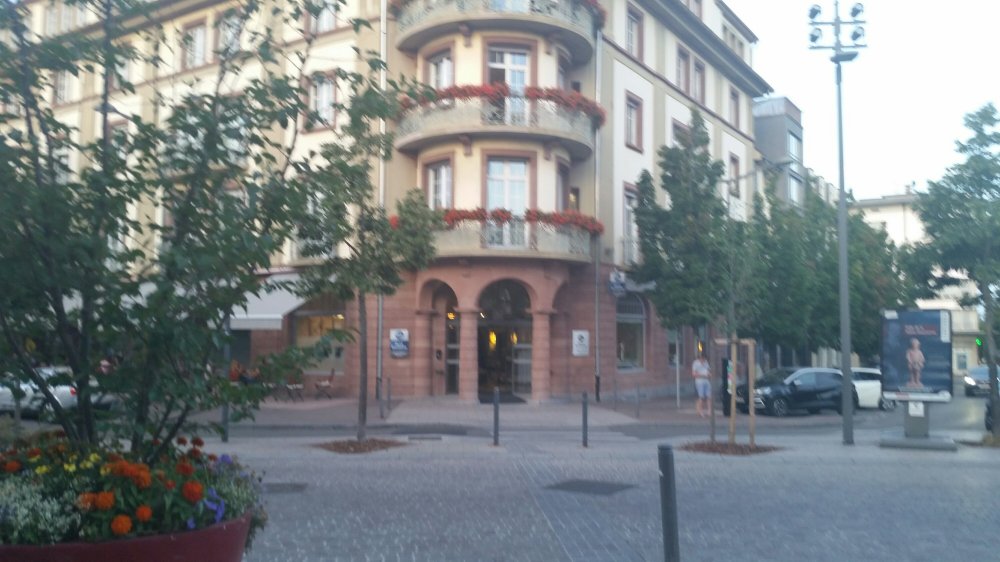 At Colmar we break down and take a taxi instead of hiking the 2 kilometers to the hostel, especially since it only costs 5€, and we are both so tired. Not sure what it is about sitting all day on a train that is tiring, but we are both exhausted.Hostel wonderfully quiet and peaceful when we arrive, but around midnight the town goes crazy over a soccer victory, and it is hard to sleep with all the cheering and whooping and cars screeching in the street, possibly doing donuts in the parking lot. 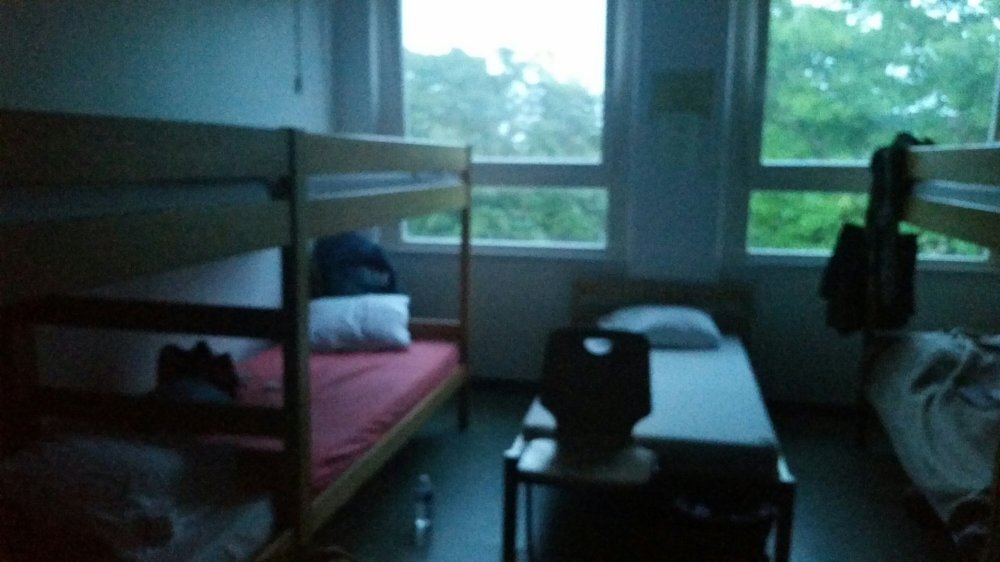 Next morning I find my phone was replugged in wrong by a well-meaning roommate, and is at 20%. Teenager insists on using charging cord for his phone for the rest of the morning. Desperately try contacting new host and downloading offline maps with hostel wi-fi and remaining battery power while I can.Despite this, phone is dead by the time we get to the train station and find out our train broke down and is delayed 20 minutes, meaning we will miss our next bus and be an hour later than the host is expecting. At least Teenager can watch movies on his charged phone. He refuses to let me use it. 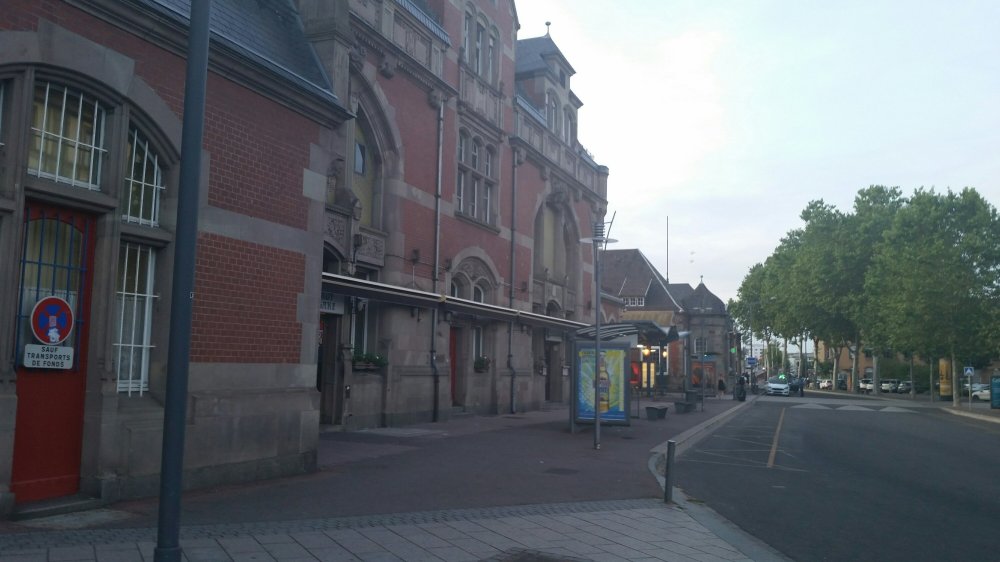 The train ride to Selestat is crowded and we have to sit separate. When we arrive, there are mere seconds to hop off before train leaves again, and I can’t see the Teenager. Call his name, but find he is oblivious with ear buds in. Almost don’t make it off the train in time.At Selestat there’s no station wi-fi, but I am able to charge my phone while we wait for the next bus. Try to look back through email to find host’s address in case we can hike there. No luck. 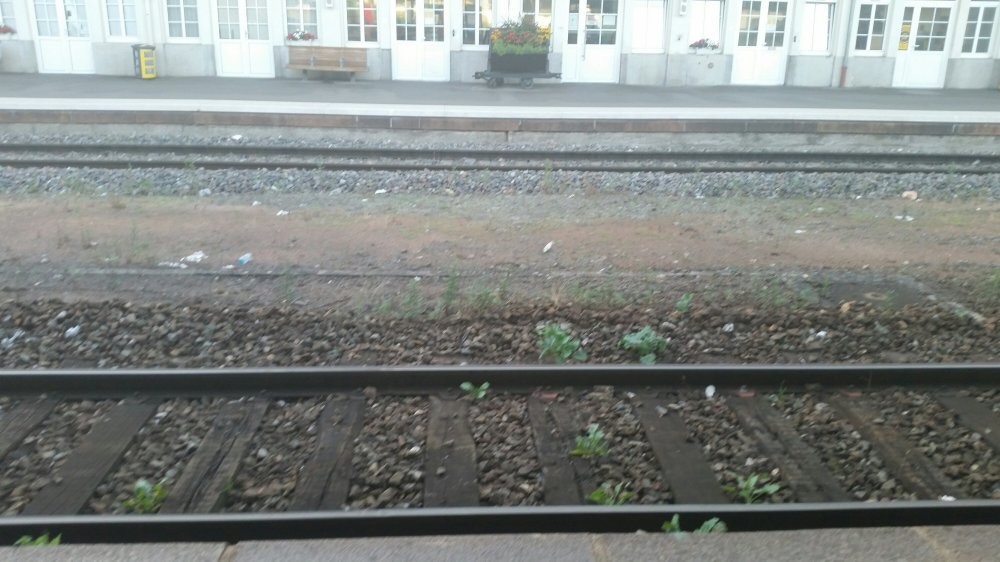 We get successfully on and off the bus and arrive in a flurry at Sainte Croix aux Mines. Teenager mad because I had to whack his shoulder to get his attention so we could get off bus in time.I am just trying to bring up a map of the town when our new host Bernard calls my name.