Morale is high when we are finally out of the clutches of the Medieval House, like being set free from a prison work camp, despite feeling simultaneously hungry and ill after the week-long bread and raw vegetables diet.

Problems with railroad near Digne make it necessary to take a bus at St. Andre. The Teenager watches stupid things on his phone and is innocently unaware of harrowing bus ride threading through tiny horsecart streets and neck-wrenching turns on mountain roads with no guard rail. 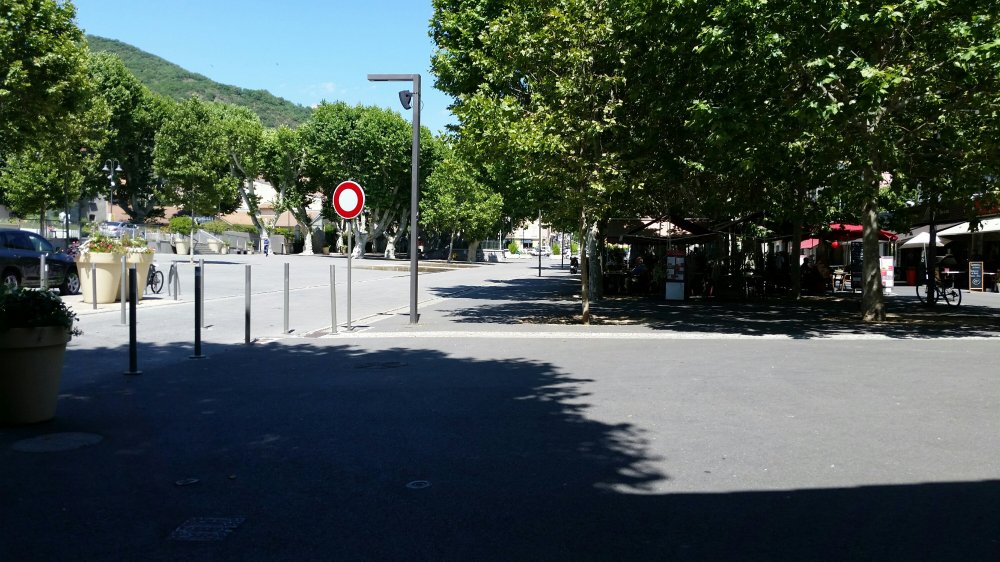 When we arrived at Digne we are informed that the only place we could go from there was back to Nice as the SNCF train station is closed – forever, despite having been directed there by their app. Railway employees totally useless under further questioning.

Trying not to panic, we walk into Digne, and contemplate hitchhiking to Grenoble. Immediately a man driving a car sees our look of distress and stops to direct us to a bus station, where we buy tickets to Grenoble, but we must wait SEVEN AND A HALF hours before departure.

It will be too late to meet our new host, but at least we will be heading in the right direction. I stop at tourist office and get the biggest, most useless map in the world and try to find our location. 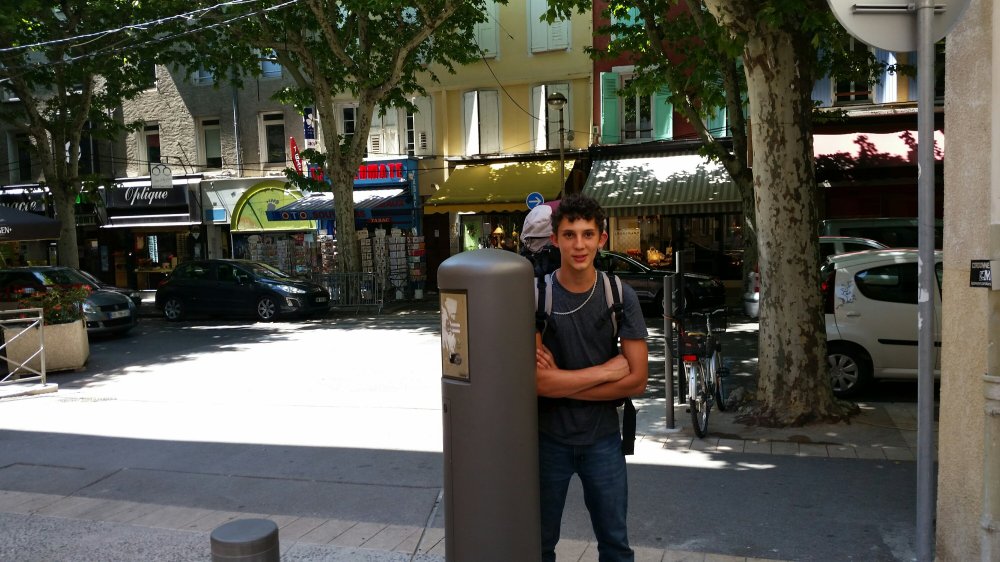 This is a cue for the Teenager to have a bad attitude episode, and go charging off in a rage to find éclairés. I have his bus ticket, water bottle, phone chargers, and passport, so I figure he will “find himself” eventually. I sit at a shady park to struggle with map.

A complete stranger comes over and helps me, but is also completely baffled by map. There are far worse places to be stranded! Everyone is so nice and friendly, and there is free Wi-Fi.

Sure enough, I stumble on the Teenager again in a little park, looking surly, and the party is reunited. We have to lug our big packs with the tent attached around all day, but there is so much hiking and camping here no one seems to think we are out of place as we wander the shady streets.

We order hamburgers ironically at a cafe – to break our Medieval fast – then stop at a little park to sit on the grass.

Teenager consumes ice cream and patisserie like a starving elephant. Then he abandons his old mother with all the luggage to look for an outlet to recharge his phone, which he can’t live without.

I try to write postcards, but am descended upon by one of the creepy park bum locals, wearing only hot pink bathing shorts, who comes over to try communicating to me in several languages that he thinks I am beautiful. I can hardly bear to look at him or stutter replies in French. Feel like Teenager isn’t earning his pastries.

Hot Pink Bathing Shorts is still accosting me when Teenager returns, and I quickly introduce him as my son. Creepy local retires to other side of park in horror right away. I feel happy to be travelling with a big guy.

After an anxious wait at the bus station, made much better by chatting with two friendly locals about Manga comics, vintage heavy metal music, and learning English, the ride to Grenoble wonderfully peaceful and uneventful. Something about jostling around in a bus that makes me relax, perhaps distant memories of drowsy afternoon school bus rides, and scenery is beautiful. There are even phone charging plugs and WI-FI to pacify the Teenager.