More than a week ago now i woke up to a grim grey sky. I started the chores right away, hoping to be inside by Calcifer when the rain started. Things went quickly, despite the usual difficulties of the brooder lamp flickering out for the little ducks, and wading awkwardly through the 100 little meat chickens trying to nibble chunks out of my ankles in the orchard.

The sky looked heavier than ever as i got ready for my last chore of milking the cows. There was a dead stillness hushed over everything, waiting. 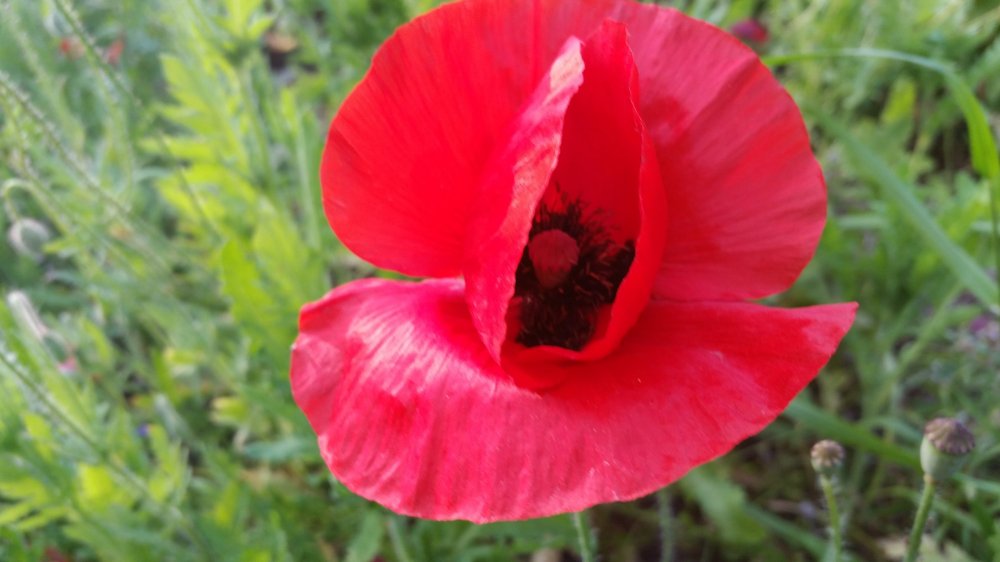 Walking behind the cows there was a sudden gush of wind that pushed us forward, the strong, cool breath of Quetzacotl, the winged serpent, the storm dragon, the wind before the rain.

I milked as fast as i could, ignoring the burning ache in my hands between my thumb and first fingers, and the strain in my wrists. I was soon finished with Chestnut, and the first patters of rain came sprinkling down as i let Flora in. 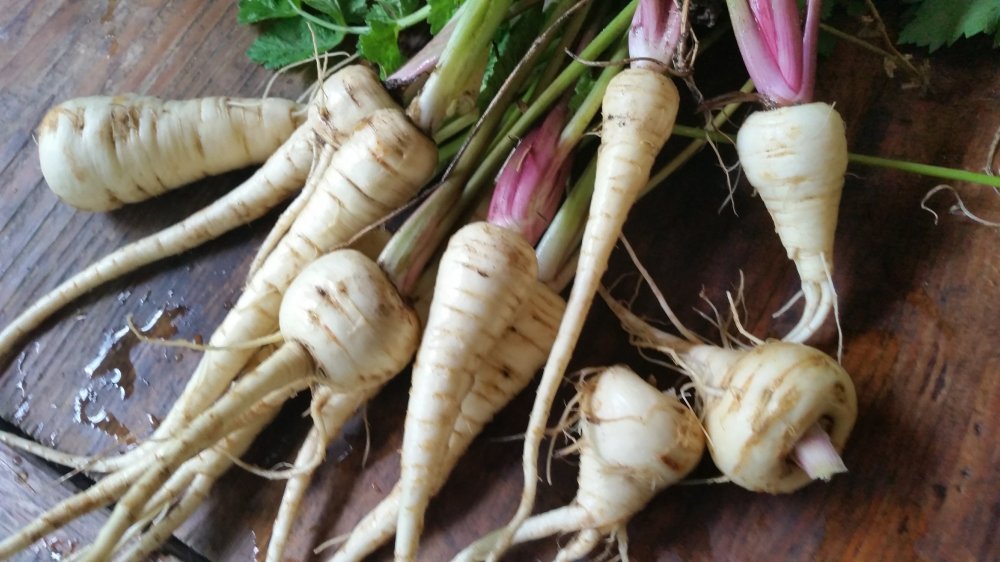 I pressed against Flora’s warm brown side as the rain became a pelting shower, the drops blowing in despite the roof.  There was a rumble of thunder, and then from very far off came a roaring like the sound of the sea, louder and louder. 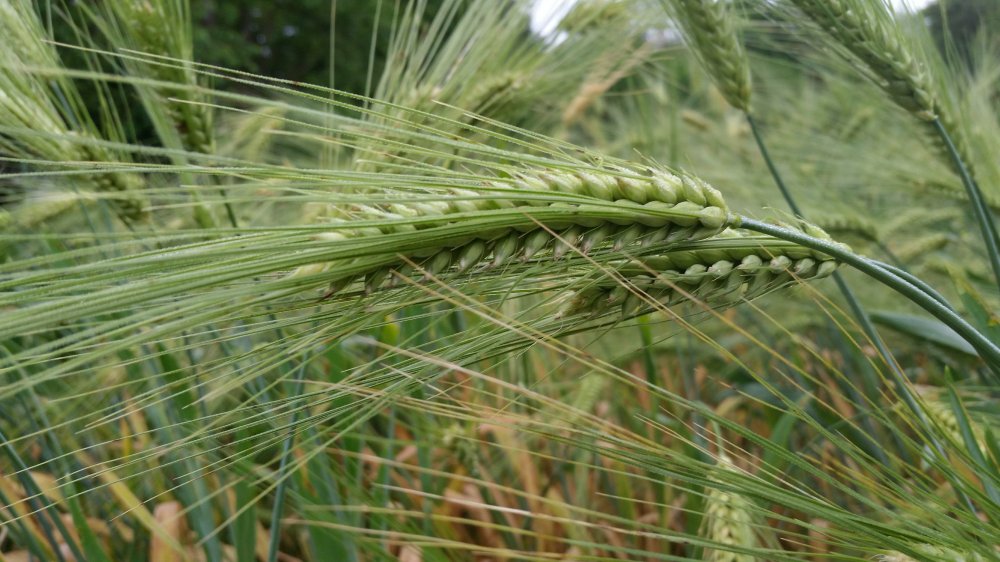 I stood up to look, the trees around the garden were thrashing, then suddenly they leaned over and seemed to hold on to the earth with all their might, their leaves white and trembling. The wind crushed the ripe barley in a spiral of rain, and then,like the form of a great, invisible creature, filled with leaves and ragtags of debris, it twisted over the garden like an arm.  It seemed unreal and dreamlike as it came towards me.

A moment later and i was pushed backwards holding the brimming milk pail. The tall old pine tree beside me groaned and leaned over at a crazy angle, and a huge branch was ripped off and flung over a fence. Almost before i knew what i was doing, i had unclipped the cow and opened the gate for her.  The trees writhed and the wind and rain crashed around me as i ran inside, realizing i didn’t know where my children were.

I found myself in the kitchen with the bristling cats, shaking all over and holding a pail half full of milk and oak leaves. The dogs had installed themselves in the laundry, and i discovered the girls had sensibly taken shelter inside under the loft. They were reading and playing games.

It was a long time before we got power again. There was quite a bit of damage after the storm due to tornadoes that formed a few miles away. This led to some interesting discoveries in the freezer. I didn’t realize we had any goat left from last year, but it appeared to be still good and edible. 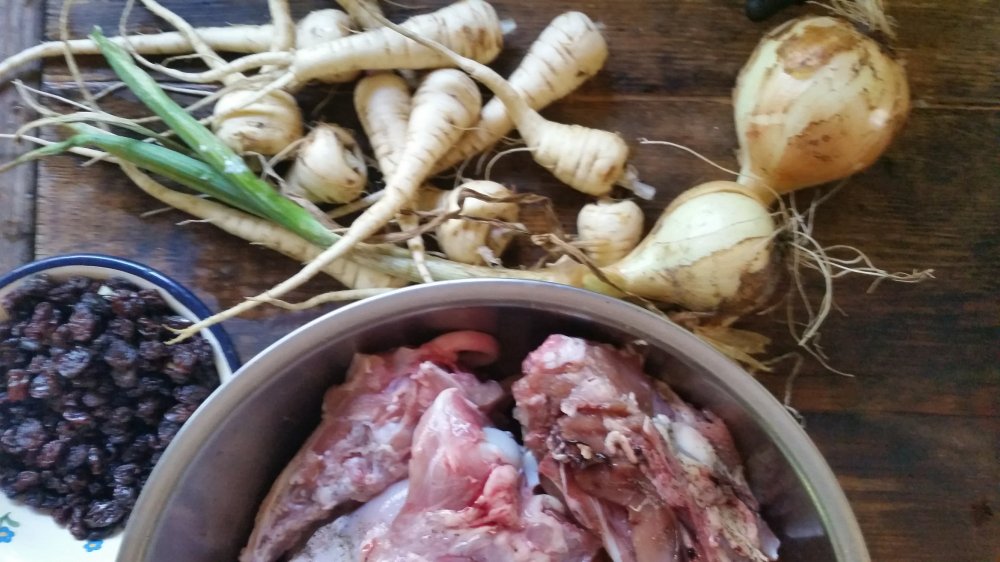 Honestly, if we had a different way to preserve meat we wouldn’t need much electricity at all. Fresh eggs, cultured milk, clarified butter, fresh vegetables from the garden…. and we can always cook because we use wood for fuel.

This goat stew was delicious, and some consolation to being up until midnight guiding the power company truck through the electric fences to fix the line, and reassuring the repair man that the dogs, goats and calves were all friendly.

GOAT STEW WITH RAISINS AND PARSNIPS

Quarters of one goat

Parsnips, trimmed and peeled and cut into rounds

1 cup of raisins, soaked for a few minutes in just enough water to cover.

1. Mix together salt and pepper and rub onto goat pieces. Use as much as necessary.

2. Heat the butter and lard together in a large pot. Add a few goat pieces and a few garlic cloves at a time so they brown nicely. Once they are browned remove them from the pan.

3. Now gently cook down the sliced onions in the same fat used to brown the goat pieces until clear and soft.

4. Add wine, the browned goat pieces and garlic and any juice, raisins in water, and parsnip rounds. Cover and cook until meat is tender, about 30 minutes.