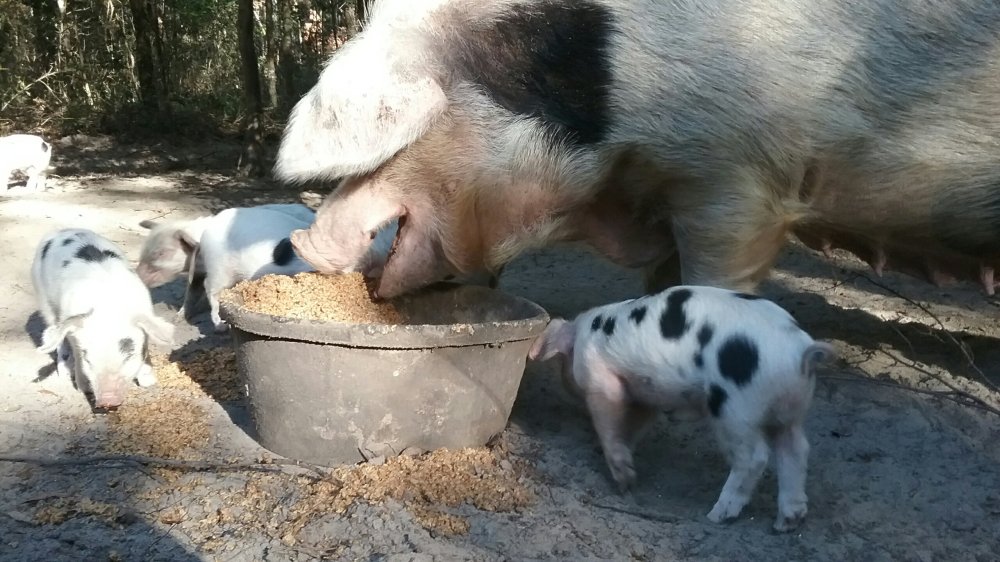 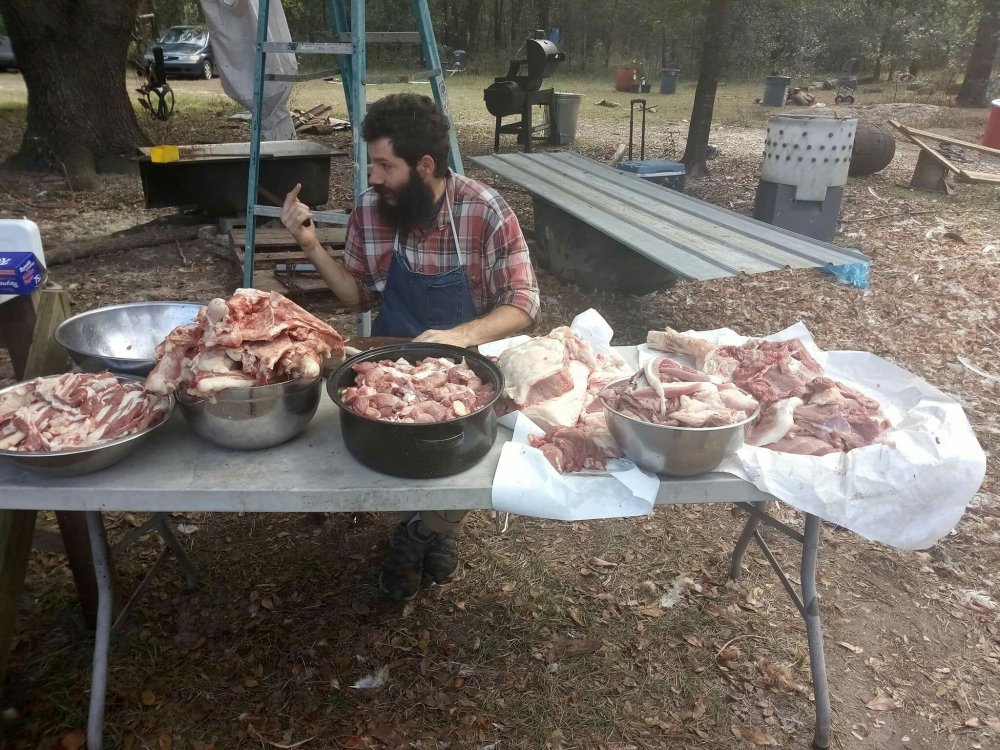 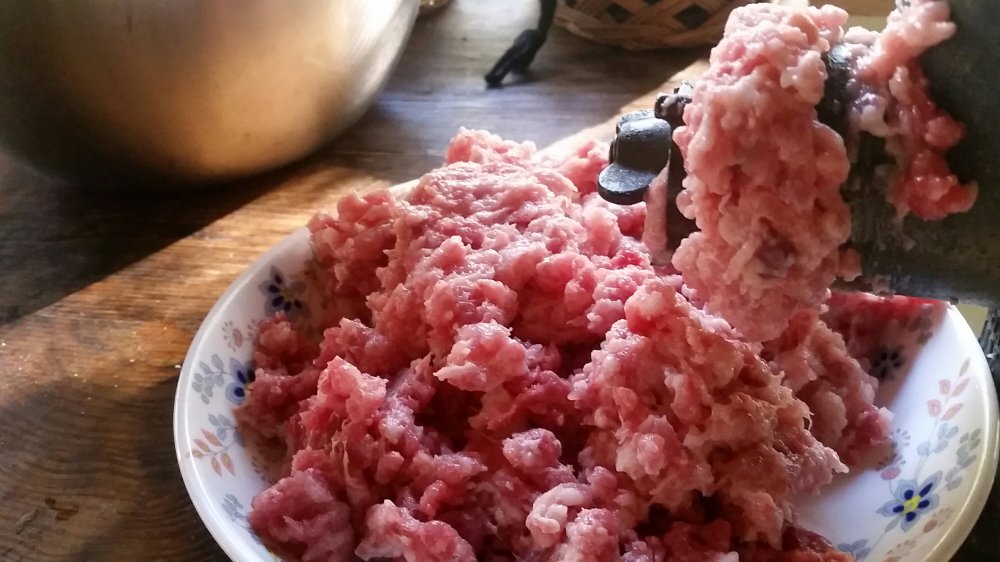 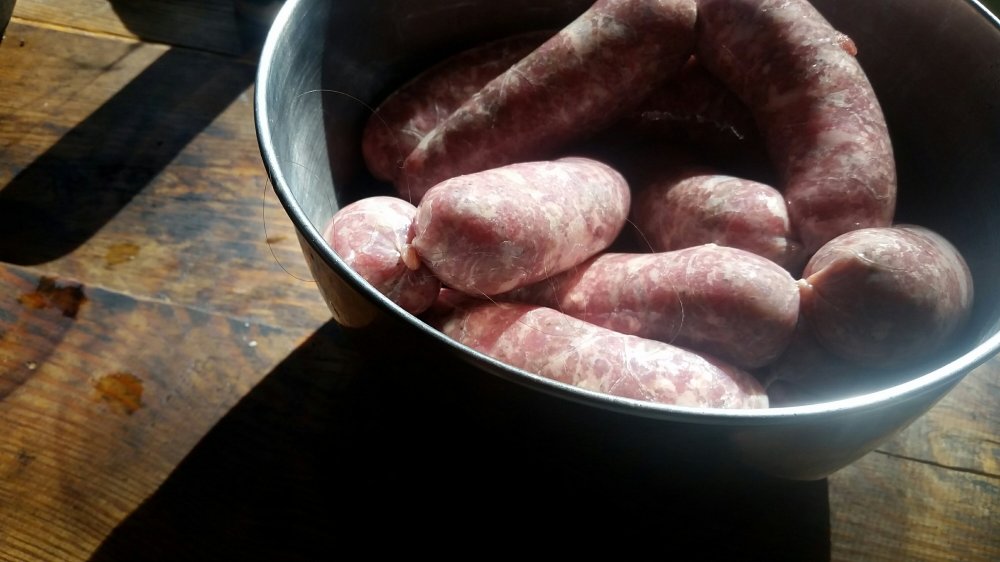 Everyone always tries to do too much for the holidays. Our version of that this year was an apparent fit of madness in which we decided to take advantage of the cool weather and slaughter a giganormous pig just before Christmas.

Bee was actually our first Gloucester old spot to have piglets on the farm. We bought her years ago,  and after the first litter of piglets she did nothing but eat and get larger and larger.  We talked about turning her into bacon for a while,  but we were attached to her,  and kept holding out hope for another litter.  Instead,  she ate and ate and ate and ate, and in the process got bigger and bigger and greedier and greedier.  If she was kept in with any of the other pigs,  they would get smaller and start to fade away,  and any extra food just went to feed Bee’s third,  fourth,  and fifth chins.

This year we decided we really couldn’t keep her any longer, but at this point she was about 10 years old,  and all we could make was sausage, and even then the sausage has a definite toughness to it.

Last Saturday we did it,  and she was so large we had to use the truck to drag her to the processing area.  Three of us strong big people,  plus one small hindering person,  were not enough to budge the huge carcass even just a short way.
What followed was a grueling week of chopping up bits of meat, grinding sausage,  seasoning sausage,  stuffing sausage,  and eating sausage.  Of course it’s the latter activity that makes it all worth it.    Eleven different sausages were made,  some old favorites, some new recipes tested,  and some made up spur-of-the-moment during midnight sausage-making marathons, in between That’s What She Said sausage stuffing jokes and cursing the meat grinder for getting clogged with sinew again.
We made Italian sausage,  bratwurst, polish style sausage,  liverwurst,  Alsatian liverwurst,  blood sausage,  boudin blanc (My favorite so far), maple sage sausage, a sausage flavored with garlic and cilantro,  a sausage with satsuma peel and spices,  and one carefully seasoned with stewed apricots and whiskey.   Not to mention the massive pot of brawn and pans of scrapple.  And the worst part?  There’s still more meat to grind and season and stuff!  We broke down at the end of the week and made desperate room for it in the freezer.

So instead of decorating,  or wrapping presents,  or making presents,  or visiting,  or shopping,  or looking at Christmas lights,  or doing Christmas inspired crafts,  we just spent the week before Christmas…. elbow deep in making sausage. It was a completely different holiday than our peaceful and beautiful destitute Christmas i wrote about last year,  still my very favorite Christmas of them all, I think.  Still, a foray out into a shopping plaza today confirmed to me that there are so many worse ways to spend a holiday together, and oh my, we all so love home-raised and processed pork!