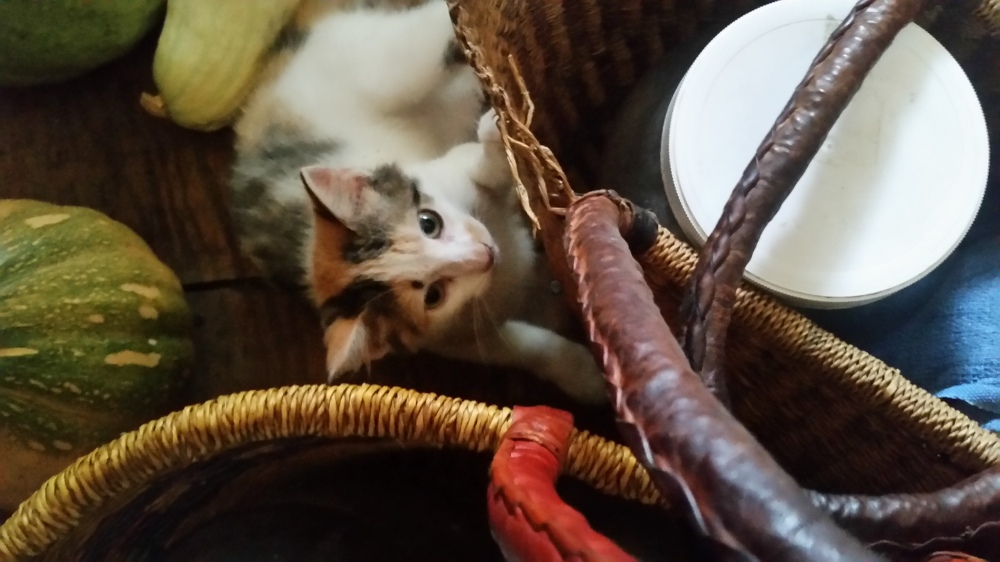 A new kitten showed up in the middle of a rain storm at the beginning of the summer.  We heard a small mewing outside, although it was so squeaky, I kept telling myself it was a strange-sounding frog.  In the morning, however, I saw a little white-and-tabby blur streak away from the barn when I went to get the pigs’ buckets filled.

This little kitten was seen in different places – hiding behind the feed bins, or crouching under a blueberry bush in the orchard.  If you got close, she would arch her little back and hiss.  For the first few days, I thought perhaps she belonged to a neighbor and had gotten lost.  But she stayed around, and we began seeing more and more of her.  I wasn’t bothered by her at all.  We need a good barn cat – we are always finding large and prosperous rats behind the feed bins.  After a week, I thought we had at last found our barn cat.  At 15, our old calico cat Teasel is not up for much but napping inside, unless it is a very small rat, and it is trapped somewhere already.

Tabitha Twitchet, as we named her, seemed to settle into the role.  As she remained very unfriendly and was unused to being fed, I realized she was a wild-born kitten that needed a home.  We began to feed her and we saw much more of her – usually draped in an uncomfortable-looking position over some junk pile in the barn.

Our Great Pyrenees, Cloud Bear, who has spent months trying to be friends with Teasel and has been only scorned and rebuked, was charmed with the new kitten.  The kitten would hiss and spit at her, but she would look very, very patient and sit down very quietly, just within the kitten’s comfort zone, and be very still and quiet.  Little by little, Tabitha got used to Cloudy.  She allowed the dog to get closer and closer to her.  Soon, she realized that Cloudy was not afraid of us, and she got closer and closer to the feed dish as I was feeding her, but would hiss and then start gobbling up kibbles.

Over the next few weeks, Cloudy tamed the kitten.  The kitten became so comfortable with Cloudy that she would rub her face on Cloudy’ teeth.  They played together, and Cloudy would carry her around by the scruff and groom her (the kitten actually did not like this very much).  Then one day, Rose just picked her up.  She didn’t even hiss, she purred!  She had come to realize that if Cloudy loved us, we must be okay.  And now the little kitten who once hissed and ran away is the sweetest, most affectionate kitten I’ve ever met.  She romps in and out of the kitchen, and rolls on her back for you to scratch her stomach.  She gives kisses and naps stretched out on Rose’s chest while she is reading.  So much for a barn cat!

She has grown quite a lot over the summer, and we have all fallen in love with her.  Cloudy still hovers over her and makes her all soggy  by grooming her.  They play hide-and-seek.  If strangers come out and hold the kitten, Cloudy looks very nervous.  If Teasel hisses at Tabitha because she has been annoyed by some over-rambunctious kittenish pouncing game, Cloudy rushes to defend Tabitha, barking fiercely from a safe distance  (Teasel has shown herself to be the boss from early on).  She is still really Cloudy’s kitten.