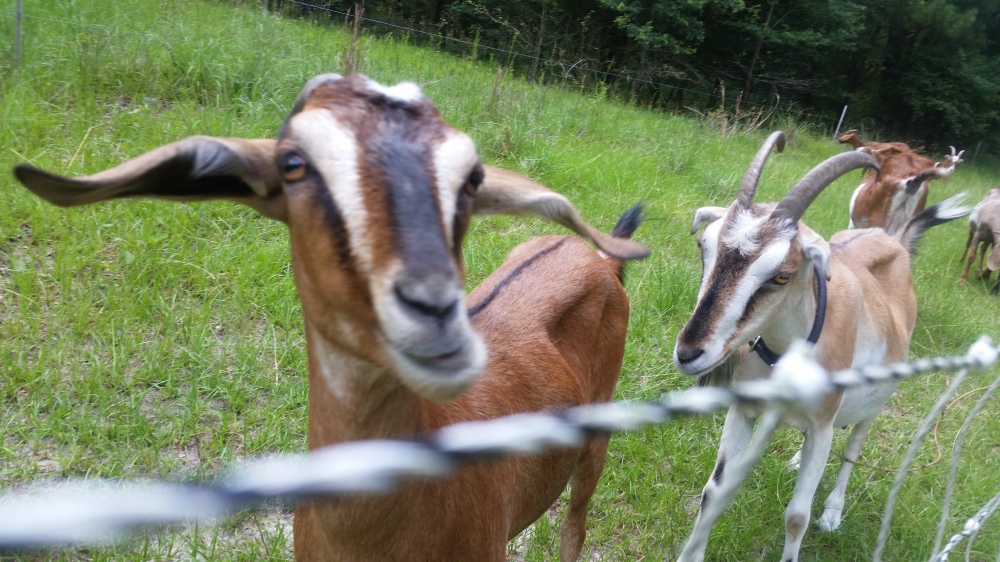 I’ve been trying to think of this summer of just me, the children, and the farm while Ethan is away as an Adventure.

I have, as much as possible, tried to make adventures a part of my life, thinking that they will give me something to look back on when I am too old and feeble to do anything interesting.  But, as I have often to remind myself this summer, adventures are not always fun or pleasant, and most adventures have their share of misery and suffering.  In any endeavor worthy of being called an Adventure, there will always be terrible times when you must take your courage in your hands, and do the best you can for the situation.

So far there have been many good and enjoyable parts to our adventure this summer, as well as, well, adventurous parts, like when Mirin and I had to dig a trench in driving rain for six hours with blunt and inadequate tools because Ethan hadn’t gotten the rain gutters finished before he left, and the kitchen was flooding.

And there was last week, when Rose got poison ivy on her face so bad, her eyes almost swelled shut.  Or the very stressful afternoon when Mirin ran the battery out on our only vehicle by listening to the radio and running the AC while I was across the farm moving cows and fences, just minutes before we had to leave for our long-awaited home school evaluation.

Or the night when one of the big pigs got out and walked into the kitchen when we opened the door.  Rose was away at a sleep over, and Mirin refused to help and made himself comfortable with a cup of hot cocoa and a book while Clothilde and I chased the pig around for hours in the rain and dark until Clo curled up to sleep in the seat of the truck, and the pig vanished in the night (it was back in the morning, wanting breakfast).  I was very proud of Clothilde.  She lived up to her name that evening (Clothilde means “famous in battle”).  Not many four-year olds can whack a huge  pig running towards them on the nose with a fence post and scream, “BAD!”

But so far the most anxious and adventure-y Adventure we’ve experienced has (of course)  involved the goats.

They say that good fences make good neighbors – we recently found that is very true.  The goats had been moved into a 5-acre paddock, lined with electric netting on two sides, and our neighbor’s woven-wire fence on the other sides.  It is a mass of tangled undergrowth, scrubby oak trees, smilax, poison ivy, Spanish needle, and grape vines.  It normally would be a place they would fight to get into, if they thought we didn’t want them there.  But they were not at all happy, and soon after I put them in, began somehow slipping out and visiting the neighbor’s newly seeded field and doing terrible damage to it.

The neighbor was rightfully annoyed, even though I explained to him that I am on my own, and that I had been daily struggling to figure out how they were slipping away.  He mentioned seeing them slip through his fence, but refused to tell me anything specifically.  He kept saying, “I just don’t want them to disappear.  I just hope they come back for you.”  I assured him that the goats always come back, but I was sorry about his field, and that I would do everything possible to figure out where they were escaping.

The very next morning, after milking, I put the goats out and wandered around with them, waiting for them to get tired of being in their woodland and slipping away while I was watching.  It was very tedious, because they knew something was up, and the mosquitoes did not make waiting around very easy.  At last I got impatient with them, and began walking the fence and testing it.  I discovered that the neighbor’s fence was not even nailed to the post for six long sections!

As I started to walk away to get a hammer and some fence staples, the goats just walked through the loose fence as if it wasn’t there, and were away nibbling the field in seconds.  I ran as fast as I could back to the barn to fetch the hardware and tools.  Meanwhile, I called the neighbor, to ask permission to mend his fence, and to let him know I was coming to get the goats as soon as possible.  His response was, “Sure, go ahead and fix my fence.”  HE wasn’t going to do it.  So I did.  I fixed the fence and put the goats back in.  They stayed in for two whole days, and looked very unhappy about it.  The third day, they slipped out again, and I only discovered it when they were coming back under the gate, fat and sleek from the neighbor’s field. 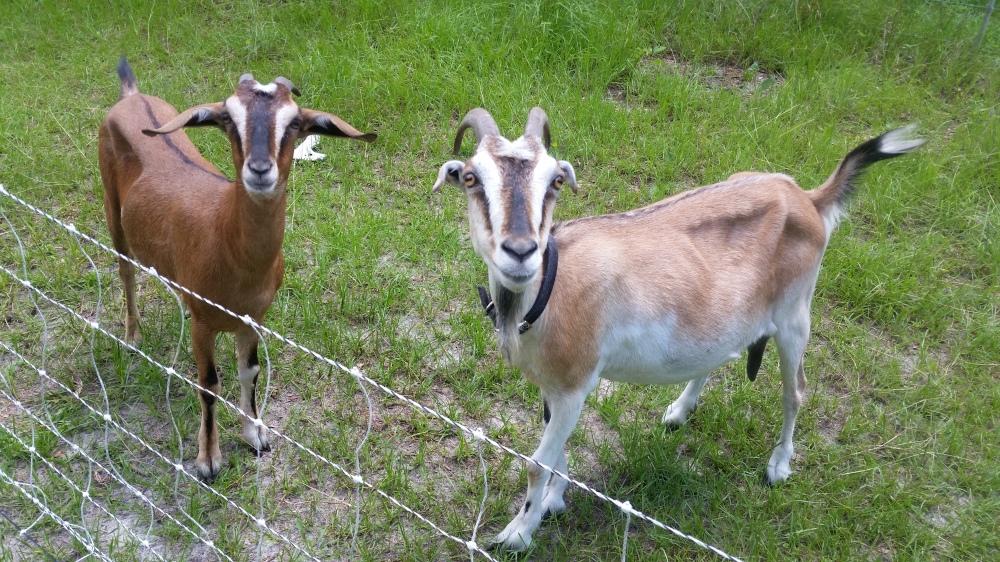 The neighbor suspected, and I thought perhaps, they were jumping out of the electric netting and slipping out under the gate.  So after milking time the next day, I put them out, and set up a goat-baffle under the gate, to block of that escape route.  This proved to be a big mistake.

It was a busy day, when I run errands in town once a week, and we have dinner with the grandparents.  We left right after milking time, and did not get back until after dark.  We couldn’t see if there were goats or not, but the next morning they were clearly missing.  I expected they would turn up later.  They never did.  The sun set that day without us seeing hide nor hair of the goat herd.

What does one do when one loses an entire goat herd?  I wasn’t sure.  The neighbor’s words echoed in my memory.  They hadn’t seemed threatening at the time, but….did he steal my goats?  Even though I was trying so hard to fix HIS fences and keep them in?

I was shocked and upset.  I thought of how they needed to be milked, and what if they were thirsty.  I kept picturing terrible possibilities that had happened to them.  Devoured by dogs?  Run over?  Stolen?  Confused for deer and shot?  It was almost like missing a child.  I felt terrible, and every time Rose remembered aloud how cute Moose had been the previous day, laying on the ground with her front feet straight out in front of her as if she were getting her nails done, we would all tear up and wonder if the goats were okay.

The next day I called the police, just to be sure they hadn’t been impounded.  The officer was very polite, but sounded skeptical.  They hadn’t been.  I kept hoping.  We wandered around looking for them.  I walked the entire fence, and discovered a huge tree limb recently fallen on the neighbor’s fence.  That was the spot he had seen them going over, and refused to fix or tell me about.  Too bad, because I had to wade through a forest of poison ivy to even find it.

By evening, I was very, very upset, and decided to confront the neighbor, politely.  I dressed up nicely, hoping to make a more respectable picture than before, when he visited me and I was in my work clothes.  I dressed my children nicely and brushed the girls’ hair.  I had them put on shoes.  I was determined for us to look the normal, nice family who just wants their goats back, please?

Of course the dumb dog ruined everything.  Several times we set out, and she insisted on following.  The last thing I wanted to complete the picture with a ragged-looking large, dirty dog misbehaving around us while I was trying to butter up the neighbor and find out whether he stole our goats or not.

We at last used the goat-baffle at the gate to bar her in, and walked quickly away to the neighbor’s house.  Just as we arrived at their house, Cloudy appeared, with a dog-grin all over her face.  The children ran after her, but she stayed just out of reach, while trodding through mud puddles.  The result was that when the neighbor opened the door, We were all muddy, hot, and dishevelled.  The children were splattered with mud, and the stupid dog was running around their yard.

However, to my great surprise, it was not THAT neighbor that greeted us, but a very nice neighbor who is a dermatologist, so we call him The Doctor.  He was very sympathetic, and said his wife had seen the goats just the day before, foraging in the forest.  He assured me they were probably in the 85 acres of vacant land around the property.

This was very reassuring, but when the next day dawned, and they had still not returned, my hopes started to fail.  A third day!  What could have happened to them?  A milk customer who was getting goat’s milk to feed puppies was very disappointed there was no milk.  I thought of the 8 years I’ve spent breeding my chemical-free, forage-based milking herd, all gone, by mysterious means, and felt terrible.

I was calling Matilda down to be milked, when I heard the sound of very sad bleating coming from far away.  I called again, and ran towards the sound.  The goats were on the West side of the property, looking very, very sorry for themselves behind the perimeter fence.  They ran down to be milked like it was the only thing they’d ever wanted.  My father in law had very kindly come and helped to fix the fence for us, so it was in good shape again.  I realized that they had probably gotten out where the fence was down, and then been unable to get back in by slipping under the fence because I had blocked it off.

After milking them, I called the neighbor, and didn’t mention anything about them being missing.  I told him about fixing his fence, and said, “I’m putting them out again, and please tell me if you see them.  I’ll be here all day, and I’ll come get them right away.  I’ll keep an eye on them, but it’s hard because they disappear in the brush.”

“Oh, they’re just obnoxious,” I said, and he laughed.  Sounding much more friendly, he said goodbye.

So the story had a good ending, after all.  The goats came back, and we did the best thing you can with a crabby neighbor – turn them into a friend.