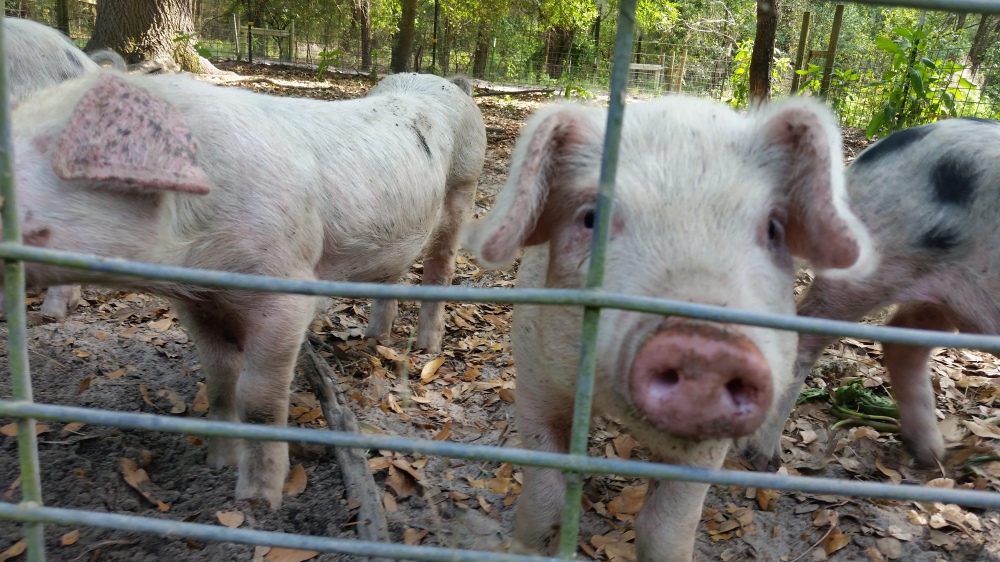 Sooner or later, piglets all get to this stage – the stage where they bust through electric netting and go marauding on devilish and troublesome mischief adventures.

In the midst of a busy gardening week, and on top of that a winter virus running through our milking herd and causing some anxiety (all the cows recovered and are fine and sassy again) the piglets suddenly discovered they didn’t care for electric fence netting.  In fact, they thought nothing of squeezing through the holes and coming down to cause havoc among the carefully planted herb beds and just-reorganized barn.

We would arrive to find them scattering, the milk bucket having been spilled and ravaged, their little ears flapping as they rapidly retreated back to the mamas. Sometimes they would squeeze into the next paddock with the cows and get stuck. Ha ha!  we thought, as they looked sadly at all the other pigs enjoying their breakfast.

This was all very cute until they got into organized crime gangs and completely ripped sections of fence down, releasing the big pigs as well.  Small pigs do WAY less damage than big pigs.

It is hard to describe just how large the big pigs are.  They are pink, spotted, and massive. They might be shorter than the cows, but their stocky frames make up for short legs.

It was not a pretty sight when they ripped open a cooler and ate a $4 head of organic cauliflower I had bought to make a special soup for a dinner party (but at least they missed the Gorgonzola).  Nor was it pretty when they nibbled on the pepper starts (hot peppers….seriously?).  I think I might have screamed when I was showering off in the outdoor shower and a massive pig came around the corner and tried to get into the kitchen.

It had to stop.  What these little boogers needed was to learn some respect for boundaries – specifically electric fencing.

A pig’s normal response to a zap is to run forward. The best way to teach them to respect electric fencing is to fence them in a hard fence with electric lines on the inside.  This gets them used to backing away from a zap, instead of running forward and ripping the fence down.

So into the penitentiary weaning paddock they go for a few weeks, until they might be trusted with the netting again.