Over the years I have witnessed so many different mothering styles among the animals.  Just like people, there’s a big difference between mothers, from over-bearing mothers, to those who take things easy.  They can range from:

But I was not at all prepared for April, who can only be described as “The Hansel and Gretel Mother”.

I made the big, big mistake of letting her out to graze with the other goats after she kidded.  The kid was healthy and strong and already following at her side.  It was only for a couple of hours, and I was just reading that mother goats always keep track of their kids, so I thought it would be okay.  Apparently not!  The goats returned after a rendezvous around the 40 acres in about an hour and a half, and April was already bleating disconsolately.  The kid was nowhere to be seen.

Baby goat instincts dictate that when they are sleepy, they curl up to rest somewhere very hidden, away from predators, and don’t move until their mother returns for them.  So we figured she had left him behind, but surely she would remember where she left her baby, right?

Rose and I walked back along their tracks, and found no sign of him.  We walked the first half of the grazing lines.  Everything was still grazed down from the last grazing back in November, so it was all pretty open, but there was absolutely no sign of the little guy.  April followed behind, bleating her head off.  She clearly had completely forgotten where she had left him.  There were a couple of hours before sundown, so our whole family, including the dog, the cat, and the goat herd scoured the pastures and wooded areas.  April’s bleating reached a horrible pitch as the darkness fell, and there was no sign of the kid.

We to bed unhappy that night, the children crying and us depressed, listening to April’s hoarse voice calling in the darkness.  We had left them out of their fence, hoping she would recover her memory and go find him, but she just shouted for him from where the rest of the goats were.  It was such a terrible noise, and it wrenched my heart to think of the poor little guy, our first kid this year, left alone to the teeth of the night.  Every time I heard a dog howl, I wondered if it was a coyote, just having relished a fine dinner of tender kid.  I remembered all the terrible post-partum nightmares I had after Mirin was born, when I dreamed of leaving my new baby somewhere and not being able to find him again.

In the morning, she still hadn’t found him, and we all silently gave him up for lost.  An hour or so later, however, she returned with him at her side, and led him straight back to their enclosure!  He had survived!

Never again, we told ourselves, would she be allowed out with a newborn kid.  We intended to keep them in, but all the goats jumped out the very next day, and the kid somehow slipped out of the fence.  He takes after April, who is part African Pygmy goat, and is an annoyingly tiny size that is difficult to fence in.  Of course she was back in an hour, bleating, because she had lost him -again-.

Another awful night of her crying for him.  It was almost worse than the first time.   We realized that last year she didn’t have such a problem because there were other kids, and they all hung out together.  The other mothers remembered where they had left the babies, so she just followed them.

She did find him, and he hasn’t gotten lost again since that.  Now he is older and stronger and less able to slip through the fence, she is making it a habit to leave him behind.  She is very protective when she is with him, but little does she know that when she leaves to go nibble the browse, he is carried around by the children (who are not allowed to touch him when she is there), plays with by the dog (who she hates and is terrified of),  and has been hanging out with us inside the kitchen!

At least she’s the sort of mother who doesn’t let what she doesn’t know bother her very much! 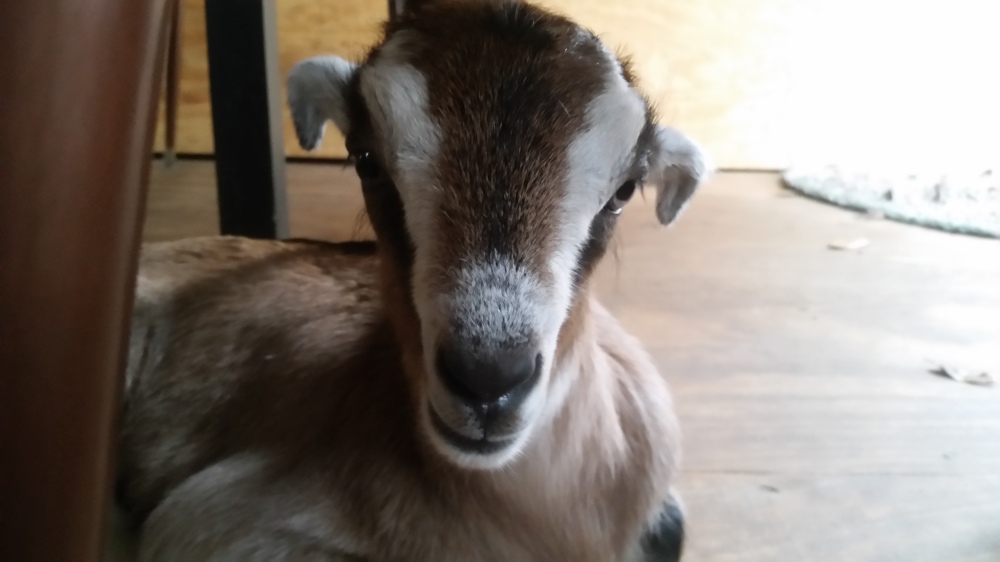 Elk, hanging out with us in the kitchen.