Today is Rose’s ninth birthday.  She has the last birthday of the year in our family, and it is always so hard for her be last.  I think that’s why she always insists on a little extra celebration – like two birthday cakes, instead of one (they are the same kind of cake, at least, so I just double the recipe and use different fruit in the filling – actually much easier than Mirin’s ice cream cookie dough cake.)

She was worried that she wouldn’t get any presents this year, since Ethan lost his job.  Luckily, I spend all year collecting ideas for birthday presents, and buy them ahead and hide them away.  I always go with “Something to wear, something to read, something she wants, something she needs.”

Usually there are a couple of extra things that land in the “something she wants” category, but it keeps it simple and narrows it down to presents that will be surely loved and used.  I can’t tell you how nice it is to have a birthday without the distraction of having too many presents!  (There really is such a thing).

A few years ago, Rose saw the film Nausicaa, and was captivated by the strong character of the princess of the Valley of the Wind.  This led to her having an argument with some other little girls about what a princess really was!  (The other girls said a princess has to have a fancy dress and a crown, but Rose said that a princess wasn’t just dressed-up, it was someone who was a leader of their people.)

She has been reading the Nausicaa comic books by Hayao Miyazaki, and asked for a Nausicaa dress for her birthday.  I haven’t sewn anything since Clothilde was born, for obvious reasons (just the idea of having the iron out around her gives me heart palpitations).  I thought maybe this would be like a Disney Cinderella costume that is easy to find and fairly inexpensive.  But no….a Google search revealed that Nausicaa costumes are over $100!!  And they usually only come in sizes for adult women who are into dressing like Manga characters.

Rose insisted I also look up “home made Nausicaa Costume” online, and we found a couple of blogs of crafty mamas who had put together Nausicaa costumes.  One was just different wardrobe items put together, the other was actually sewn from various patterns, one of which was no longer available.

I was going to say sorry, we’ll just have to put one together from what we already have, but Rose was SO disappointed.  So I said if she watched Clothilde while I was sewing, I would try.  Besides, we are studying measurement for homeschool, so it was a perfect real-life learning opportunity.

Although my grandmother was an incredible seamstress (to help support her family in wartime France, she left school after 8th grade and worked for a dress-maker), I never learned from her – one of the biggest regrets of my life.  I have had to teach myself sewing.  I am terrible at following sewing patterns, because I learned sewing by copying clothes I already had and drafting my own patterns.  I have a distrust of other people’s hem margins.  Every time I’ve tried sewing from a pattern, it always comes out funny.

This task was daunting.  The costume has a collar, complicated appliqué, belt loops, and a helmet.  I have never done any of those things!  I warned Rose that this could turn out to be a big disappointment, but she (said she) didn’t care.

We carefully picked out the right shade of blue fabric, made sketches based on the comic book drawings, and started measuring her and drafting the pattern.

I honestly don’t know how I managed to pull it off (no one in my family realizes how incredibly hard of a task this was….they have not hand-drafted and sewn a pattern for a specific person from a comic book drawing before).  The collar was a challenge, the appliqué gave me a headache, and the helmet was only saved from being too small by a few scraps of cloth I had saved out.  But Rose is just delighted with it, and after all, it did turn out to be recognizably a Nausicaa dress.

I’m afraid this might set the standard for birthday presents a little higher than I’d like it to be, but I am glad to have been able to make something she loves so much.  And it was nice to do some sewing again – it gave me hope that my sewing machine and I could collaborate more in the future. 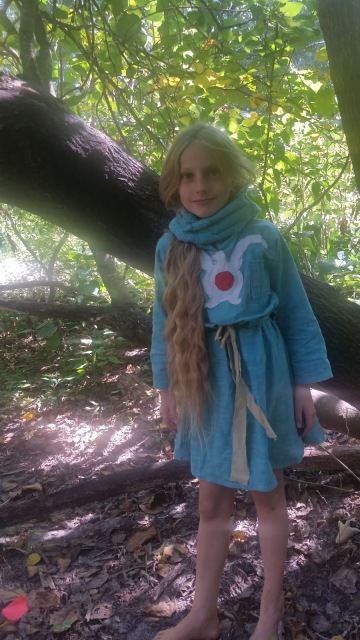