We were reading a book that was a childhood favorite of mine – Our Animal Friends At Maple Hill Farm, and it occurred to me that I am always writing about our many animals that to us are familiar and almost like extended family, but that it must seem confusing to anyone who hasn’t followed along with us from the beginning, when we only had a few animals.

I thought it would be a good idea to introduce everyone…

This is David.  He’s our buck we got last winter.  We were thrilled to find a buck who has also been organically raised, just like our goats.  He was very friendly when we got him, because the guy he grew up with was always petting him and scratching between his horns.  I don’t know how he could stand to.  David is always peeing on himself, and he smells so awful.  It’s so disgusting watching him pee on his face (he always laps some up), and then he stands up, his beard and face dripping with goat pee.  The last thing I want to do is pet him.

BUT  he’s made some great babies, and we really appreciate him for that.

This is May, and her little kid (well, big kid now) Titania.  They are so cute together, because Titania is just a smaller version of May.  They are always napping together, and Titania always rests her head on May’s shoulder.  I was trying to get a picture of it, but she jumped up and ran away when I approached.  Ethan has picked her up and cuddled her too much.

Ellie, our very first goat, was May’s mother.  May also had a twin who was born very weak, and that Ellie rejected.  We helped her along until one day she just suddenly died.

May has always been very healthy.  When she was little, she was always getting out and eating where she wasn’t supposed to, and she was always the fattest little goat.  She is one of the friendliest goats, too, and it’s easy to get close to her, since she’s always thinking about her stomach.

This is Cricket, in mid-bleat.  She has twins this year, Tamlin and George, two bucklings.  Cricket is pretty because she has a reddish brown coat.  She is the boss of the herd right now.  We tried dehorning her, but she still has one horn, so she is a unicorn goat.

Here is Tamlin, one of Cricket’s kids, resting on top of the broken water trough.  He is named after a romantic  old English ballad about a knight who was caught by the fairies.  His sweetheart, Burd Janet, has to wait by the crossroads on Halloween, the night he is going to be given as a tithe to Hell by the fairy queen, and rescue him.

He is a nice little goat.  His twin, George, is plain-looking but very husky and playful.  I thought I had a picture of him, too, but he was probably too quick.

This is April.  April is May’s granddaughter, but they don’t get along very well.  We called her April because she was born on April 1st – her mama, June Bug, was born on June 1st.  May, June Bug’s mama, was born on May 1st.  It’s complicated, but we had this funny pattern going for awhile.  She was from the crop of kids where we desperately borrowed a buck from our friend who was three different breeds:  African Pygmy, La Mancha, and Nubian.  His dad was a kinder (Nubian/pygmy blend) who accidentally got in with the La Mancha goats.  He was very funny-looking with waddles and Shrek ears, but he did a great job breeding the girls.

April inherited the Shrek ears, and the bossy African Pygmy personality, even though she is very short.  She is an interesting little goat.  She is very smart and not very friendly.  She hates being petted, but is happy enough to get in the milking stand for some food. 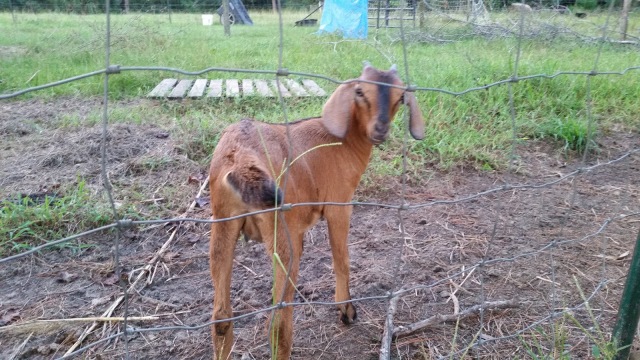 This is Mab, April’s kid.  We were so relieved to see she has normal Nubian ears.   She has such pretty black markings on her forelegs and face now, but she and Titania looked exactly alike at birth.  April and May couldn’t tell their babies apart, and it made them anxious.  Occasionally they started letting the wrong kid nurse, so they started cautiously sniffing them first.  Mab is a climber.  She is always trying to climb things.  A few times she’s managed to climb up into an oak tree.  We are hoping she will grow out of it, but it does not bode well.

This is half of June Bug, running away from me with her kids.  June Bug was May’s baby, but unlike May, she is not very friendly.  Even though May was heavily pregnant, she jumped out of the fence and gave birth in the middle of the paddock where the cows were going to be moved next.  We had to move them back with the rest of the goats, but this was very, very traumatic for baby June Bug.  I carried her carefully while Ethan led May.  She has never liked us ever since.

She is running away because I have been drenching her with worming medicine.  She hates being caught and drenched.  I’ve been worrying about her, because she is looking pale and thin.  I am planning to give her a B12 injection, too, if I can catch her.  She is a real pain to take care of, because I can’t handle her very well.

The kid running behind her is Oberon.

This is Oberon’s twin, Cobweb.  She is also not very friendly.  We are going to wean the babies this week, and I am hoping she will get more friendly after that.

This is Twilight Sparkle (my children named her after spending time with my brother, who showed them tons of My Little Pony cartoons).  We usually call her Sparky.  She does have huge, beautiful amber-colored magic unicorn eyes.

She is April’s sister, from the same buck, but her mother was Nougat, May’s sister (we gave Nougat away to a new home because she was not being very nice around Clo).  She also has little Shrek ears, but otherwise she is a very pretty goat.

She was the one I worried about with kidding this year.  She was so large, I thought she would have twins.  She is a small goat, like April, and David, the buck, is huge.  It was her first kidding.  She actually didn’t have twins – just one kid, who was huge.  We named her Mustardseed (after the fairy in Midsummer Night’s Dream), but we call her Moose.  She looks part Percheron.