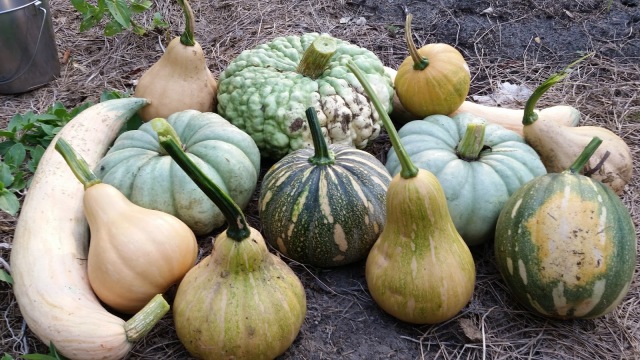 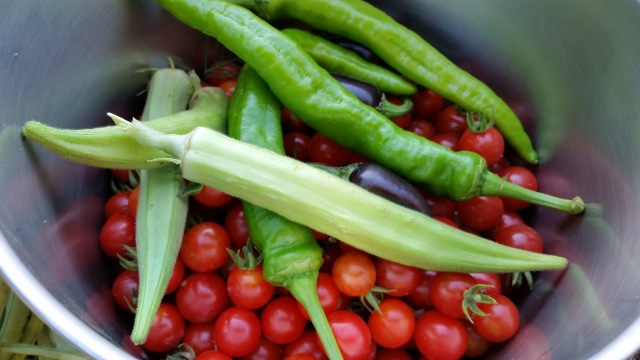 The pumpkins are coming out of the garden now.  There are Seminoles from seeds I saved last year, a few Galeux D’eysines, some delicata (didn’t make the pictures), North Georgia Candy Roasters, Jarrahdales and Marina di Choggias.  There are also a pile of Zucchino Rampicante from one vine that seeded itself and has taken over a quarter of my fairly large garden.

Curiously, in my Seminole patch I have a bunch of the green-striped pumpkins with golden splashes.  They look like cassaba pumpkins, and taste like cassaba pumpkins.  I saved these seeds from pumpkins the pigs had “planted” when we put the seeds and stringy insides in the piggie bucket for them to enjoy.  Last year all the pumpkins we got were from the vines in the pig yards.  I did buy some cassaba pumpkins that winter, and threw the seeds to the pigs.  They must have grown, bloomed, and crossed with the Seminoles (they are the same species – I’ve checked.  There are four different pumpkin/squash species that won’t cross with each other).  I didn’t get any cassaba pumpkins last year, so they must not have set fruit, but they certainly flowered.

It’s not good for pure seed saving, but I actually really like cassaba pumpkins mixed in.  My Seminoles, having been pig-planted in the first place, also have Tahitian Melon traits.  There are good things about all three of these varieties – Cassabas are just delicious, with thick-walled flesh, but don’t keep.  Tahitians are very, very sweet, and keep, but not as well as the Seminoles.  The Seminoles are hardy, grow like crazy, and keep for almost a whole year at room temperature.  They are my most useful pumpkin, and are really a staple crop for us.  My favorite winter dinner is:  a roast, a baked Seminole pumpkin, and a huge salad from the garden.

I figure I will use them in order – the cassabas first, not being good keepers, the ones that have a Tahitian look next, before they lose their sweetness, and the hardcore, Florida native Seminoles last, because they are wonderful like that.  They keep their sweetness even being stored so long.  If we end up with a really variable pumpkin, I won’t mind, since I like all three of them.  Maybe I’ll plant a blue or red Kaboca pumpkin to blend in, too – as long as they are fairly distinct, I think I’ll be able to tell which order to use them in.  It would be a fun experiment, anyway.

It’s interesting to me that the French pumpkins I’ve grown (Rouge vif and Galeux D’eysines) are both very watery pumpkins.  My French cookbook only has one recipe for pumpkin – soup.  They make very good soup, but it seems so boring.  I put pumpkin in all sorts of recipes – we always have so many.  It seems the Seminoles were selected more for roasting than for soup.  You have to work with what you have, I suppose, so if you have soup pumpkins, you make soup.

47 so far have been pulled out the garden and are covering whatever surface is available in the living room.  It’s another Pumpkin-A-Week-Challenge year, as Ethan calls it.  There are more still in the garden ripening.  Of course it never works out to really be a pumpkin a week.  Sometimes I don’t cook pumpkin, and sometimes I roast several at a time, because they are good leftovers.