There are so many eggs this time of the year, that any egg recipe is most welcome.  I have my own version of cheese pie, or quiche – which usually includes whatever vegetables is particularly abundant at the time, and lots of home made goat cheese.  Sometimes it has a crust and some times not – I prefer the crustless quiche because I like things to be all homegrown, and also wheat does not quite agree with me – however, my children are the opposite.

The crust recipe for this quiche is interesting because it includes egg.  And it turned out very nice, I wasn’t sure what to expect.  I usually use flour, butter and cold water or cream, but I think I liked the La Cuisine crust given here better.  It is rich and flaky.

The only thing was that it seemed to make more crust than I could fit in my tart pan….it looks like a large tart pan, but perhaps it is actually small.  I used all the pastry, just to be fair to the recipe, and the crust turned out rather thick.  When I make this again, I will probably make a thinner crust and use the extra pastry for crackers, or blueberry tart or something.

Naturally, this recipe comes in three parts – first the crust, and next the filling (which is for a regular quiche), and last the modification to add Gruyère: 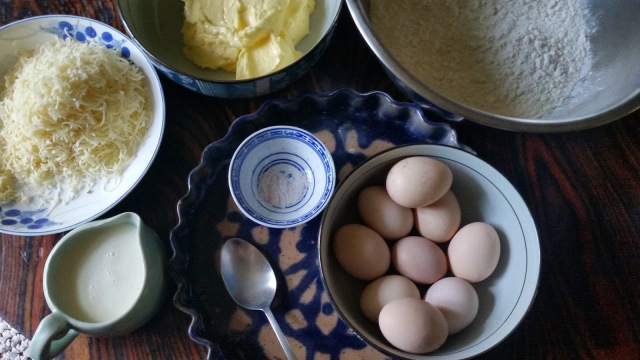 Line a buttered baking dish, three centimetres deep, with a dough made as follows:
500 grams of flour;
250 grams of butter;
8 grams of salt;
2 eggs.
Bake your crust in a hot oven for 10 minutes, remove, allow to cool, and fill with a half litre of cream, 100 grams of diced butter, four whole eggs, beaten; add salt and pepper and mix it well.
Let cook in a gentle oven for 10 minutes and serve the quiche well browned and toasted.

Prepare as above, but replace the cream with 250 grams of grated gruyere.

4 cups of flour
2 cups, plus 2 tablespoons butter (2 sticks plus 2 tablespoons)
1 teaspoon salt
2 eggs
1.  Preheat the oven to 400F while you mix all ingredients into a dough.  Roll out on a floured surface and line a buttered tart pan (about 3 centimetres deep).  Or, if you are lazy like me, press in the dough in as evenly as possible, and crimp the edges.
2. Pre-bake the crust for 10 minutes.  When you pull it out, turn the oven down to 350F.  Let the crust cool for a bit while you are preparing the filling….

7 tablespoons of butter, diced
4 eggs, beaten
salt and pepper
3 cups of grated gruyere
1.  Mix all the filling ingredients well.  Pour into the pre-baked crust and put back in the cooler oven for about 10 minutes.  It should be well browned and toasted when it is done.