I love the way vegetables sneak up on you.  When you first plant the seeds, the harvest seems so vague and far away.  The little plants start out so small, and for a long time it seems they will never get any bigger.  Then suddenly there they are – all ready to pick, hiding away in the leaves.  It’s sort of how children grow up, too – it seems they will be little forever, and then suddenly they are taller than you.

At last we have something other than collard greens and blueberries (not complaining about the blueberries).  Tomatillos for salsa, cucumbers, cherry tomatoes, summer squash.  The Roma beans were especially sneaky.  I kept looking at them from a distance, wondering when they would have any beans.  It wasn’t until I weeded around the bed that I realized they were covered in beans that desperately needed picked. 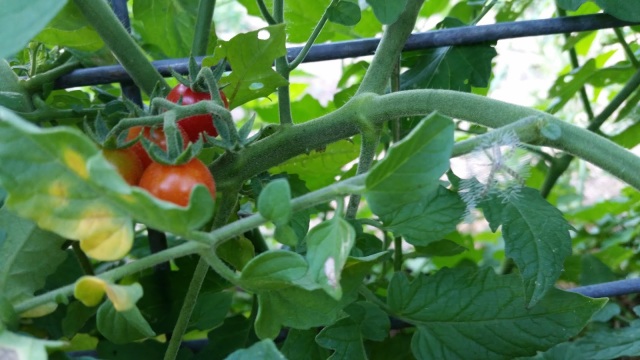 The garden is still under construction.  There are still several weedy paths to mulch, the Dudley Farm corn and the millet need planted, and I still have so many cassava stalks I could plant.  Now that the summer rains have begun, it will be harder to work in the garden in the evenings, so it might never be done.

I usually plan an enormous garden – one that will overwhelm us with vegetables that must be passed along to friends and family.  This year of course I did the same – on paper – but when it came to building it, I realized some compromises would have to be made.  We are just too busy this season.  So I planted just enough.  And in some cases the just enough has turned out to be hardly any at all.  And yet it will still feed us, if we make thriftiness a virtue.

What I mean by that is to make the most of things.  Not just with perspective, but literally make the most of things.  It means noticing and appreciating things we would normally ignore, like the wild callaloo in the garden, or the cassava and sweet potato greens.  We had a year like this last year, too.  While we were traveling, a good part of the garden died from neglect.  We had to be content with what we had….and once I got over the disappointment of not having a huge, beautiful, productive garden, I realized it was still enough.   (Almost a radical idea in a culture of consumerism and over-consumption).  I ended up happy that the garden worked out the way it did, because it forced me to be creative and to try new things that turned out to be really good.

So even though it isn’t quite the garden of my dreams, I have confidence that it will provide, not only the bare minimum, but really, truly cover the table.