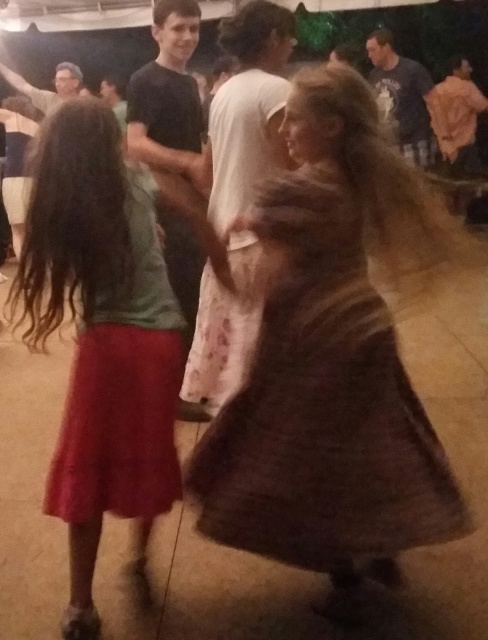 We spent Saturday and Sunday at the Florida Folk Festival in White Springs.  It turned out to be a beautiful weekend, and one of the best festivals we’ve attended in all these years.

Ethan first attended the FFF when he was about seven weeks old, and our children have been there every year except last year, when we were travelling.  It was nice to be back.  Everyone had a great time at Willy TheLosen’s living history area, learning to play instruments, or talking with Trapper Robert about black powder guns and hide tanning.  There was a little chihuahua named Mr. Bear that Clothilde fell in love with.  Mirin and Ethan helped split wooden shingles and hew a pine beam with axes.

We later wandered around the festival, looking at some of the traditional crafts, and found an incredible performance by Ben Prestage. After seeing his performance, we didn’t even bother going to see Arlo Guthrie on Saturday night.  We’ve already seen him at the Folk Festival twice over the years, and his performance is never very good or interesting.  Sort of ho-hum, really, and he didn’t go on until 10 o’clock.  The next day we were listening to old recordings of the Folk Festival in the car, and one of them had Cousin Thelma Boltin saying in 1970-something, “You don’t find stars at a folk festival, just a lot of people you like to listen to.”

It was kind of sad to reflect on that – especially having walked past Arlo’s big, fancy bus and all the security around it just the day before.  The Saturday night performance used to be a showcase of all the best musicians that year, and in years previous.  They were all true folk musicians who played in the campground every evening and spent the night in a tent, not musicians who go around in a fancy bus with a security entourage.  When the funding changed for the festival several years ago, they started to bring in a big name every year, have a lot more rules, have a lot fewer interesting musicians, and try to make money off of it.

Both afternoons we spent some time splashing around in the Suwannee river.  The river was very low this year, which was perfect for Clothilde.  Alligators lurk in the deeper parts, but the river was low enough that she could walk all the way across it with Ethan.  My friend from Canada joined us, and she was kind of put off by the black water – I explained that it was from all the tannins in the leaves of the trees on the banks, but she didn’t seem to quite believe me.  Mirin dredged up some interesting pieces of wood from the bottom of the river – one of them looked like a dragon.

Sunday evening we went to the contra dance.  It was the first time I was able to dance since Mirin was born, having since then either had a small child clinging to me, or been pregnant and not up for it with the heat.  I used to dance all weekend long, as long as there was dancing.  Now I’m old and out of shape and had to rest out several dances.  Mirin and Rose also joined in, which made me happy beyond words to see my children enjoying something that I had also loved when I was young.

We thought we would only stay for a few dances, but it was so fun we ended up staying until the stage was closed at 11!  We are regretting it today – everyone except Clothilde has gone around groaning about how tired and creaky they are.  At the festival, Ethan was scoffing at a pair of old folkies who were unloading a “his” and “hers” motorized mobility scooters.  This morning, we were wishing we had them to go get Matilda for milking!