This recipe is very simple and made a good accompaniment to a more complex, saucy main dish I had made that same evening.  The mild seasonings bring out the earthy flavor of the potatoes rather than cover it up.  The potatoes are first boiled with their skins on – or as R. Blondeau puts it – they are cooked “en robe de chambre”, or in their dressing gown.  The skins then peel off easily, and there is much less waste than if peeling raw potatoes.

Cook potatoes with their skins on in water, peel them, cut into rounds, and reheat them in 60 grams of melted butter, mix with half a cup of cream (or milk) with salt and pepper.   Don’t allow it to boil. 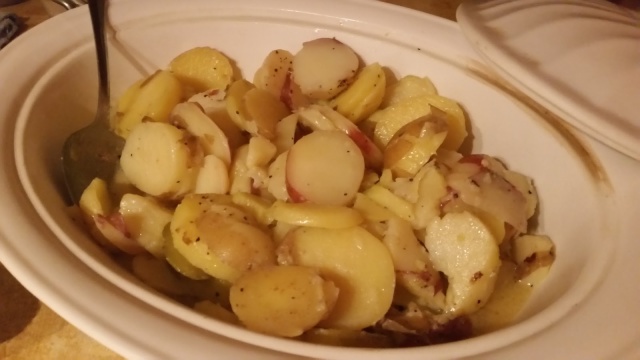 Potatoes With Milk Or Cream

3 lbs of potatoes, the firmer, waxy kind rather than the baking kind
4 Tablespoons butter
1/2 cup milk or cream
Salt and pepper
1.  Boil the potatoes in water, with their skins on until they are tender when you poke them with a sharp knife.
2.  Drain and allow to cool enough to handle.  Slip the skins off and cut them into rounds.
3.  In a large-enough pan, melt the butter.  Add the potatoes and cook for a few minutes, until the potatoes are thoroughly warmed.
4.  Add the milk or cream, and season with salt and pepper.  Leave on the fire just long enough to warm the milk or cream, but don’t let it boil.
Notes:  I used milk when I prepared this dish, as I had forgotten to save some cream back, and I had already churned butter for the day.  Milk was ok – but it would have been even better with cream.