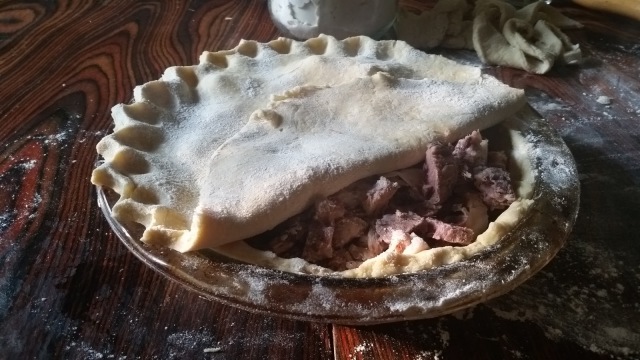 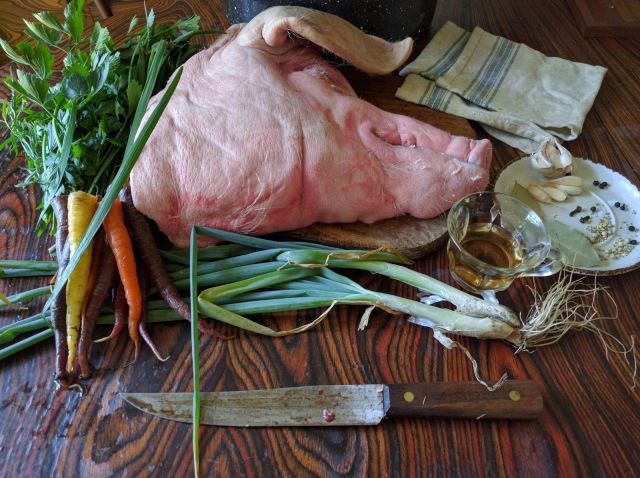 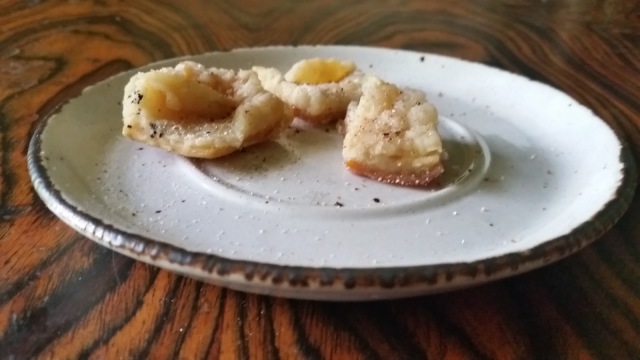 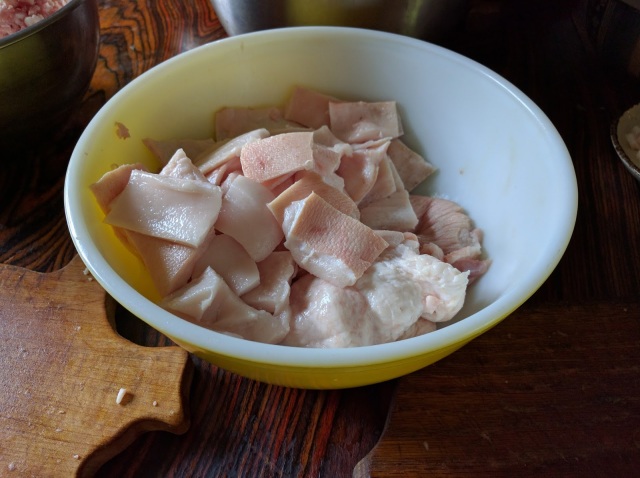 The Chicharrones (or, as they are called here in the South, Pork Rinds) are just the pork skin sliced and baked for awhile.  In general, we scald and scrape our pigs, not only because cured hams must have the skin-on, but also so we can save the skin for these delightful, crunchy treats.  A sprinkling of salt, smoked paprika, garlic, and a tiny bit of cayenne make them taste like BBQ-flavored potato chips.

The brawn has been cooking all week.  It is also called headcheese, but I like to use the British word, “brawn”, as I think modern people cringe when they hear “headcheese.”  They have certainly not tasted it before, because it is really very good – shreds of tender meat in rich broth.  Technically, brawn also includes the trotters, and I did not, as I want to save them to make court-bouillon when it is time to boil the brined hams.

The head spent several days simmering with herbs and vegetables until the meat was falling off the bones.  It then cooled for awhile, and the broth was strained off.  I separated the meat and minced it while the broth boiled down and reduced by half into a thick, gelatin-rich aspic.

The brawn is usually finished by laying the minced meat and chopped vegetables from the stock in a pan and pouring the stock over top. The stock cools to become aspic (meat jelly), and a layer of creamy white fat forms on top.  It is usually sliced to be served, and it is very tasty, especially on a toasted slice of good bread.

I also like to serve it hot.  It goes very well over rice or mashed potatoes, and this time I decided to try it in a pie.  I made good pastry with flour, butter, salt and cold cream.  The trick is to have the butter at a good temperature – not too soft or too cold, and to mix it in with a fork and not your hands.  It should be mixed until there are still some larger chunks and some fine crumbs before the cold cream or ice water is poured in to make the dough.  The larger chunks make the crust flaky, and the smaller crumbs make it tender.  You can change how flaky or tender the crust is by varying the ratio of large and small crumbs.

I rolled out the pastry and arranged the minced meat inside.  I poured the stock over to fill the pie, and baked it until the pastry was golden and flaky.  The leftovers were also good cold for breakfast.