Skip to content
This is gruesome…but an interesting story.  Ethan had dropped me and the girls off at the gate on the way in to the farm, because they like to walk along and look at Star’s piglets.  They were lingering, loitering, moving very slowly, and I had a lot I wanted to get done, so I ran ahead – and screamed when I almost stepped on this coral snake!
It’s tail was still moving, but when I stopped to look, I realized there was something wrong.  At first I thought Ethan had run it over in the van, and that made me sad.  But then I took a closer look. 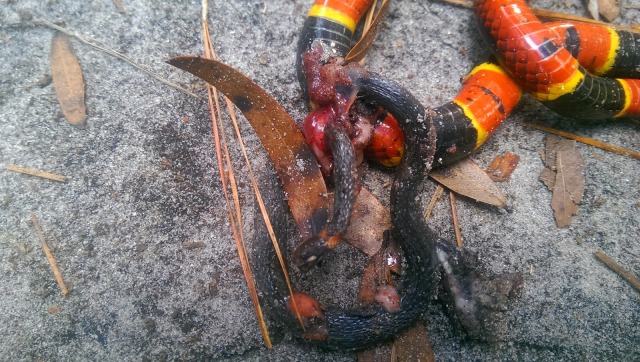 The coral snake had a smaller, ring-neck snake that had busted out of it’s side, but was all dried up, as though it had struggled out, killed the coral snake, but then died.

I’ve seen a similar picture of a Burmese python that had eaten an alligator.

We set the poor coral snake aside, and it was gone in the morning.  A cautionary tale, I suppose – don’t swallow something you’ll come to regret later!