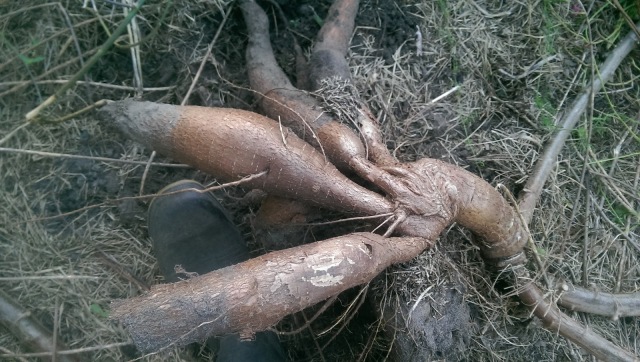 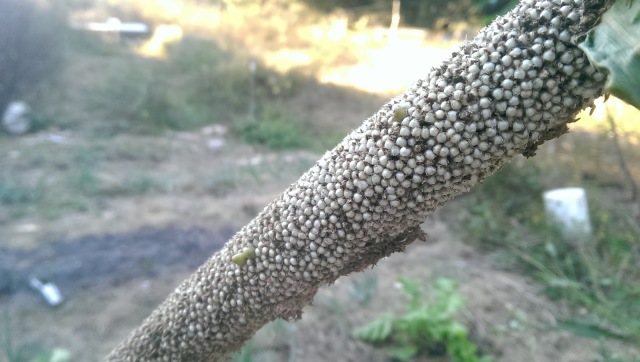 Clothilde said the funniest thing to me the other day.  She said it right after she had handed me the tiny cob of stunted dent corn that she found in the garden, so she could bear-hug our great pyrenees farm dog, Belle.  Belle rolls in stinky stuff, loves frolicking in the rain, and usually smells bad, but Clothilde loves to rub herself all over her white fur.  Belle stands very quietly and still while Clothilde is around her, even when she is lifting up her ears to look inside them, or is petting her whiskers the wrong way.  So as she was petting Belle, Clothilde said, in a sing-song voice, like a chant, “Belle is nice, cows is mean.  Night Hawk good, goats is bad.”

We dug some more yuca in the garden.  It’s huge.  I need to get it out of the way, because it’s shading out my poor winter garden.  There were also some huge plants that just came up along the edge of where I planted radishes.  They are huge, maybe 12 feet tall.  We were wondering what they were, and then when they fruited we could tell – it’s the millet from Mali I had planted two years ago.  It didn’t grow that year, but somehow it grew now.

We’ve been eating so much sausage since we got the two pigs in the freezer.  My big kids, who would easily eat a whole package of store sausage at my mom’s house every day if they could, are “sick” of sausage apparently.  They get sick of anything we have a lot of – we just have to figure out how to grow grilled cheese sandwiches.  Since I’ve been recovering, they have lived almost three meals a day on grilled cheese (Not that they haven’t been offered other food – but they scorn it).  It can’t be home made soft cheese, either.  Only cheddar is acceptable.

Just the other day I was eating yet another sausage and wondered if maybe this was bad for me.  There’s the cultural prejudice of a “balanced” diet.  I have hardly eaten any vegetables other than pumpkin, lacto-fermented roselle soda, cucumber pickles from the summer garden, and kimchee Ethan got me from the Chun Ching market for weeks.

But then I realized that’s silly.  I was just talking with my mom about an anthropologist who was studying the diet of a very isolated, primitive group of people.  For some time during the year, they ate almost nothing but meat.  And during another time of the year, they ate almost nothing but honey.  I know exactly what that’s like!  And really eating a lot of pork right now is just compensating for the summer, when we mostly eat vegetables and not much else (there isn’t room for much else when they are piling up).

It’s that kind of “gift from the earth” diet that I think is very good for us.  Everyone gets so confused now about what to eat.  Do we eat only raw vegan, lacto-vegetarian, Macrobiotic, gluten-free, WAPF, Primal?  What about food combinations, or blood type.  If I’m type B positive and I eat cashews, will I eventually get heart disease or something?  We have no reference point other than diet books because there’s just too much choice in front of us all the time – the same choices mostly, all year long.  And the choices are geared towards what kind of advertising focus group you fit into, rather than what the earth is offering.

Take, for example, the “Paleolithic” diet.  At the only WAPF conference I’ve been to (years ago), I met a fellow with a name tag that said “Hunter-gatherer” and had New York under it.  I was impressed.  “Are you a hunter-gatherer IN New York City?” I asked him.  He looked embarrassed.  No, he admitted.  He just wrote about what he thought was a hunter-gatherer diet on a blog.  For breakfast he had an avocado, a pomegranate, and a boiled chicken egg.  Not that it wasn’t a nice breakfast, but it wasn’t exactly “Paleolithic.”  All those things came from different continents, and were nicely selected cultivars or breeds for production and shipping.  While it’s a nice idea – it’s just that – a modern diet fantasy.  It might be great for some people, but there are all kinds of earth-based nuances of human diets from wild humans that we can’t copy with the grocery store.

Ever since I discovered Masanuobu Fukuoka’s book One Straw Revolution, I’ve loved his idea about how the foods that support your health during a particular season are the ones that are naturally available.  It’s so true.  In the winter we get the nourishing roots and citrus.  It’s the best time to slaughter animals in the cool weather, so you have broth on hand through the flu season.  In the spring there are fresh, wonderful greens, lots of them.  As the weather heats up and the greens get tough and bitter, the watery, cooling fruit vegetables of summer are ready.  The late summer (the season of Earth in Chinese medicine – associated with sweet and starchy foods), the pumpkins, the yuca, the sweet potatoes, and the corn are ready.  It’s a beautiful dance that brings so much meaning to the cycle of the year, and to the table.