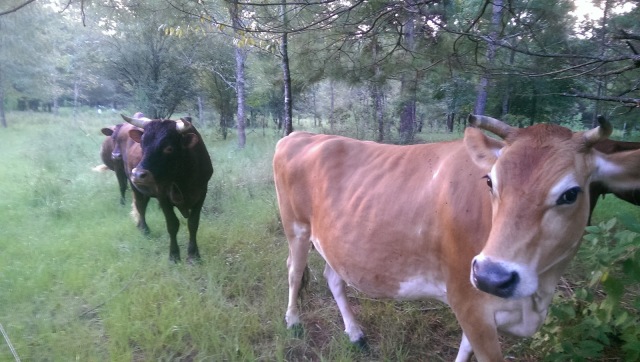 Last week, before we knew Ethan would be sent out-of-town for work, we had separated Flora and her calf (who ended up being called Ninja – he was always hiding somewhere.  More than once we thought he was lost).  The other cows were right on the other side of the fence for a few days, so Flora didn’t mind being separated (and besides, her grass was nicer and she didn’t have to share).  But Explorer minded.  You could tell it bothered him that she was on the other side of the fence.  He spent a lot of time at the fence-line if she was near there grazing.

I was walking up to get the goats one day when they were like that.  Flora was intently cropping grass.  Explorer was just hanging around, watching her with his “Hey, baby, notice me” eyes.  Flora ignored him and turned and walked towards me.  As she went Explorer stared intently at her butt while she walked away.  Maybe someone was going into heat, but I realized he was staring at all the cows’ butts with the same “creepy guy stare” you would expect at the downtown plaza!  It’s amazing how many testosterone-driven creepy guy antics you see with the bucks and bulls.