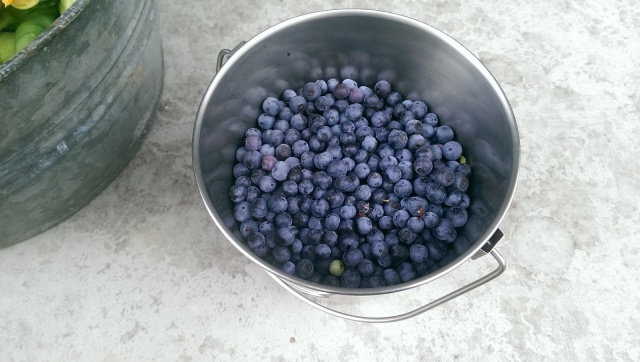 I know yesterday’s writing was a bit radical…situations like that just annoy me so much.  It’s appalling to me, but I realize I am a minority…things are the way they are because most people want them to be that way, even if they don’t realize it.  At this point in my life, I am mostly content to just be different and leave it at that.

There have been so many blueberries lately, and everyone has been eating so many – especially Clothilde, that they have seriously affected her digestion.  I shall spare you the details, but it’s been violent and grisly.

There’s so much I would like to do at the farm, but it is so hot and humid, I feel like I can’t move.

The sense of rest we got from travelling (even though parts of it were not very restful) has stuck with us.  I am feeling reluctant to rush back into my previous life – I enjoyed getting a perspective on things.  I knew something felt wrong in my life, but I couldn’t tell what – after all, I am doing exactly what I always wanted to – have a family and a farm.  It felt ungrateful to be unhappy.

Today I realized how obnoxious my children are at mealtimes.  It goes like this:

The beautiful food I have grown, prepared, and now cooked is almost ready.  Children fighting and getting restless.  I suggest they come help set the table, and am completely ignored.  To distract them from beating each other up, I put food on the table.  They come running over, fight over whose plate is whose.  Clothilde takes a bite from everyone’s plate.  Whining and yelling ensue.

The demands begin.  Rose needs a fork, and her special spoon, which I can’t ever seem to identify correctly, because her favorite changes daily.  She shouts out a confusing description of the one she wants, and calls me stupid.  She also shrieks at me that she needs ice water, with THREE pieces of ice, no more, no less.  Mirin eats something off of Clothilde’s plate, and she screams and starts sobbing inconsolably while he grins and laughs at her unhappiness that he caused.  I rush over with more food and Rose’s ice water, but have forgotten the spoon.  Rose hits me and yells at me that I just don’t care about her at all.  I only care about Mirin and Clo, obviously.

I try to sit down and eat, but Clothilde climbs into my lap and starts dunking bits of food in my water.  I try to push her off, but it’s like she’s glued to the chair, she’s holding on so tightly.  She clambers all over me for the rest of the meal, doing unspeakable things to my plate of food and leaving hers untouched, and I eat as fast as possible until I think I might be full.  Then I get up and clean up the fantastic mess everyone’s managed to make in the short time we were sitting down.

Okay, I know it sounds awful, and it is!  I can’t believe I lived with that for so long!  Usually by the time I’ve sat down to eat, I can’t even tell if I’m hungry, I feel so stressed out.  The fighting, whining, and bad things happening to my food are so distracting and awful.  And I know that they don’t HAVE to act like that – they never acted this way the whole time we were travelling.

I’m not just complaining – I fully intend to make changes.  Now that I’ve been able to see this pattern, I’ve thought of things I can do:

–  Everyone sets their own place (having one kid set the table just makes for more fighting, because everyone wants to do the same thing and it never gets done.  Frustrating, but that’s how it is.)

– Their place has to be set to be served.  Glass, spoon, fork, napkin, everything.

– Water is on the table.  They can get themselves ice, however many pieces they wish, but I am not getting it – especially not if they call me stupid.

– I am so rescuing the old high-chair from my mom’s house and locking Clothilde into it during meal times.  I feel like this change alone will be so relaxing.

– Everyone clears their own dishes, or they don’t get washed.

That’s what I’ve thought of so far.  Yes, things have to change.